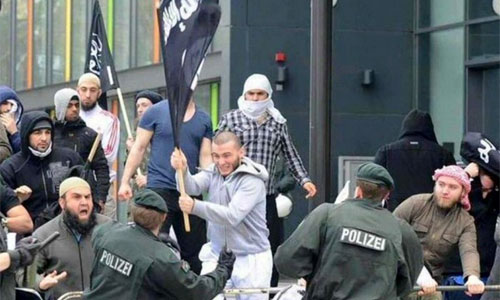 It’s a scary picture. A bunch of Syrian refugees in Germany gatherer around the hideous black ISIS flag. Clashing with police. Way to throw such a loving and hospitable welcome back in people’s faces right?

Or not. In that, it’s not a bunch of Syrian refugees from the latest influx gathering around this flag. It’s some German ISIS supporters, a year ago, waving a flag that Germany has since banned.

This image that’s doing the rounds on Facebook via some fear-mongering race-baiting watchdogs is from a year ago. Here’s a blog post from 2014 featuring the same image that is being shared online as though it happened two days ago.

This is something of an Internet false flag. It’s becoming increasingly common for people to take pictures out of context and harness them for agendas, often to create fear and outrage. Or fear and loathing.

Truth is so important. Especially in fraught and complex geo-political situations where millions of people have been displaced by evil regimes hell bent on genocide.

Wikipedia calls a “False Flag” action one that:

“False flag (or black flag) describes covert operations designed to deceive in such a way that the operations appear as though they are being carried out by entities, groups, or nations other than those who actually planned and executed them. Operations carried out during peace-time by civilian organizations, as well as covert government agencies, may by extension be called false flag operations if they seek to hide the real organization behind an operation. Geraint Hughes uses the term to refer to those acts carried out by “military or security force personnel, which are then blamed on terrorists.”

In this case, militant websites with an anti-refugee agenda are conducting operations on social media that are then blamed on terrorists. And if you share these images without verification, you’re aiding in their dark arts.

Welcoming refugees involves cultural change. It involves giving something up. It involves sharing the hard fought and hard won prosperity that our country enjoys thanks to the work of previous generations. But love costs. And love always involves change. And change isn’t necessarily a bad thing, it certainly hasn’t been bad historically. Australia benefits from multi-culturalism. Though the Indigenous population in Australia have legitimate complaints about the way they were treated by a bunch of boat people. Most messages to the contrary are fear driven.

And look, it’d be naive to suggest refugee resettlement doesn’t come with some social costs — there are massive issues trying to accommodate multiple cultures in different places, there may even be criminals who take advantage of our generosity, but that’s not a good reason not to be generous. The key to minimising these difficulties is loving and inclusive communities, not panic-driven fear mongering.

A word for Christians

This is especially true for Christians, and sadly it’s those wanting to protect a “Christian” way of life who share stories like this. So let me speak directly to Christians for a moment, not because Australia is a Christian nation and we should want to protect that, but because we’re meant to be imitating Jesus in our engagement with the world. And listening to him. It may be that some ‘enemies’ of Australia, or of Christianity, come to our shores as refugees (or to European shores). Our nation will decide what to do with refugees, and fear might be part of that decision, but that shouldn’t be a result of our fear.

Here’s how Jesus says to respond to this.

“You have heard that it was said, ‘Eye for eye, and tooth for tooth.’ But I tell you, do not resist an evil person. If anyone slaps you on the right cheek, turn to them the other cheek also. And if anyone wants to sue you and take your shirt, hand over your coat as well. If anyone forces you to go one mile, go with them two miles. Give to the one who asks you, and do not turn away from the one who wants to borrow from you.

“You have heard that it was said, ‘Love your neighbor and hate your enemy.’ But I tell you, love your enemies and pray for those who persecute you, that you may be children of your Father in heaven. He causes his sun to rise on the evil and the good, and sends rain on the righteous and the unrighteous. If you love those who love you, what reward will you get? Are not even the tax collectors doing that? And if you greet only your own people, what are you doing more than others? Do not even pagans do that? Be perfect, therefore, as your heavenly Father is perfect. — Matthew 5:38-48

Sounds unrealistic right. But it’s what Jesus calls for us to do, and what he demonstrates, on our behalf, at the Cross. You were the evil person. Your heart is the sort of heart that lead humanity to kill God. To crucify Jesus. And yet, while you were still a sinner — an enemy — a Godkiller — Christ died for you.

There will be costs for loving and welcoming refugees. But we should be most willing to pay them.

You might be afraid of what these costs will mean for you and your children. And that’s normal. But we shouldn’t respond to fear the way the world does. Our ‘fears’ have a different perspective. Or, again, as Jesus puts it…

Interestingly, that same chapter has something to say about providing welcome to those in need —especially those who also belong to Jesus (but all people ‘belong’ to Jesus in one sense, don’t they, whether they know it or not. That’s kind of the point of the “give to Caesar what is Caesar’s” — what has Caesar’s image on it — and “give to God what is God’s”…). This is what not fearing the one who can kill the body looks like… Taking up our cross. Following Jesus. Costly love for his sake.

Whoever does not take up their cross and follow me is not worthy of me. Whoever finds their life will lose it, and whoever loses their life for my sake will find it.

The sort of love Jesus calls us to give our neighbours, this sort of welcome, is what he also calls us to give to our enemies, in the hope they’ll become our neighbours. The apostle, John, seems to have these bits of Jesus’ teaching in mind as he writes to the church. It’s interesting to see what he does with fear, and how he values truth and love, in these words. If only we were more inclined towards pursuing truth and love, rather than fear, when it comes to what we share online.

This is how we know what love is: Jesus Christ laid down his life for us. And we ought to lay down our lives for our brothers and sisters. If anyone has material possessions and sees a brother or sister in need but has no pity on them, how can the love of God be in that person? Dear children, let us not love with words or speech but with actions and in truth. — 1 John 3:16-18

And here’s the bit about fear — which again nails a failure to love our brothers and sisters. Which, again, is a warning that we might need to take seriously if a significant percentage of Syrian refugees are followers of Jesus, and we might also need to take seriously if we’re called to love our enemies like Jesus did… And that’s the basis of the sort of love Jesus calls us to.

God is love. Whoever lives in love lives in God, and God in them. This is how love is made complete among us so that we will have confidence on the day of judgment: In this world we are like Jesus. There is no fear in love. But perfect love drives out fear,because fear has to do with punishment. The one who fears is not made perfect in love.

We love because he first loved us. Whoever claims to love God yet hates a brother or sister is a liar. For whoever does not love their brother and sister, whom they have seen, cannot love God, whom they have not seen. — 1 John 4:16-20

Truth and love are so important in a fear driven world, especially where social media exists to amplify people’s outrage and loathing, where fact checking comes a distant second to opinion sharing. Please. Please. Don’t join in false flag activities as a Christian. We have a flag. We have a standard bearer. It’s the Cross, and the one who carried it first. Carry that online. Make that your true flag. Be known for holding out the love of Jesus, even to our ‘enemies’…