We hit Ancient Corinth on day two in Greece – our visit to the site was sponsored by the Bishop of Corinth. His minion who wore black, carried worry beads and looked like a gangster watched our trek around the site, before we made our way to a newly minted “St Paul Centre” for an absolutely opulent (and free) lunch put on by the Bishop.

The site itself is amazing. There’s a museum filled with relics that have been uncovered in the dig. The chief archeologist gave us a run down of the landscape. The city of Corinth sits under a pretty impenetrable fort (more on that later) atop the Acrocorinth, it has a steady supply of water, is resource rich, and sits beside the Corinthian isthmus, a vital trade link between two major oceans.

The city was pulled apart by the Romans, who later rebuilt over the top of the Greek foundations in the late BCs. The dig has uncovered much of Roman Corinth, and gone deeper into Greek Corinth. One of the best bits from the head digger was a look at a little secret passage that they found in an underground Greek temple (no longer underground).

On the Roman Corinth front, the city puts the New Testament into real perspective – which I guess is the point of the visit. Standing in the centre of the city square you’re struck by the intersection of commerce, justice and religion. Roman business and Roman Law were inextricably religious. And the construction of the city and placement of idol statues (especially of deified emperors) hammered that home. The temple of Apollos is pretty impressive (some of its pillars still stand) but the imperial temple dominated the landscape, and could be spotted from just about anywhere in the city. 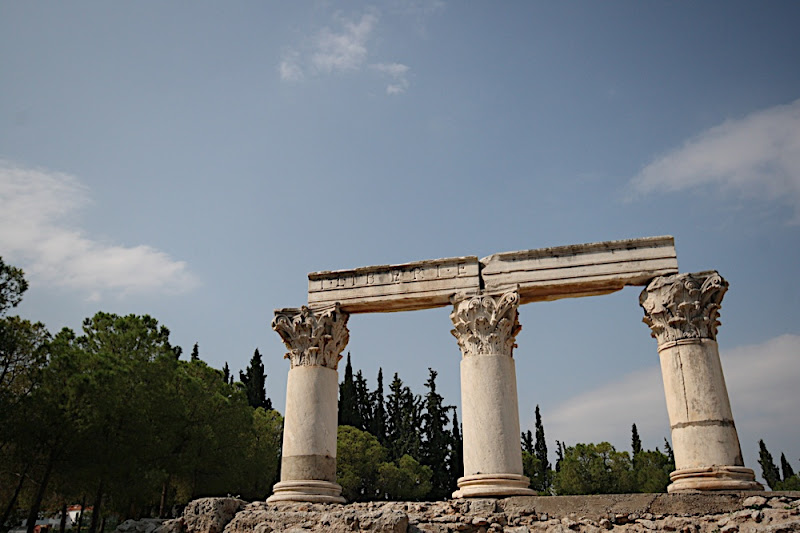 The imperial temple – the pillars have been slightly rebuilt, though much shorter than they would originally have been. 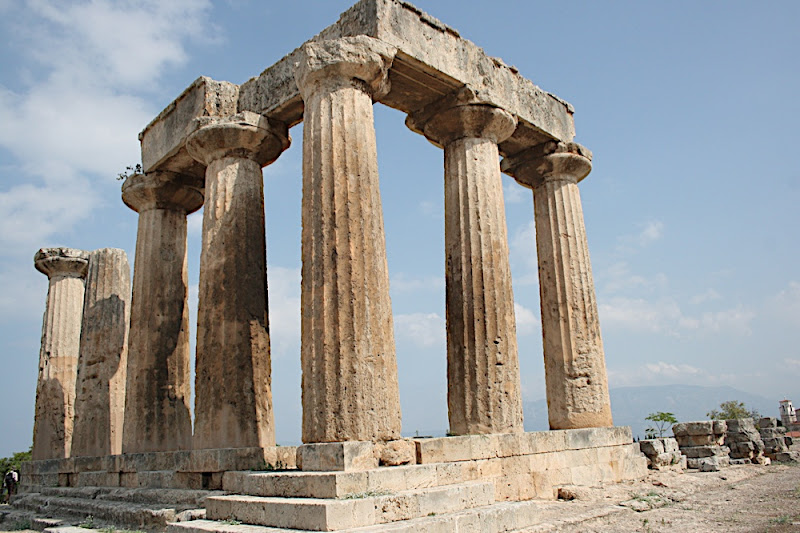 The temple of Apollos

The coolest bit of the trip (Bible wise), was standing in front of the Bema, or justice seat, where Paul appeared before Gallio in Acts 18. 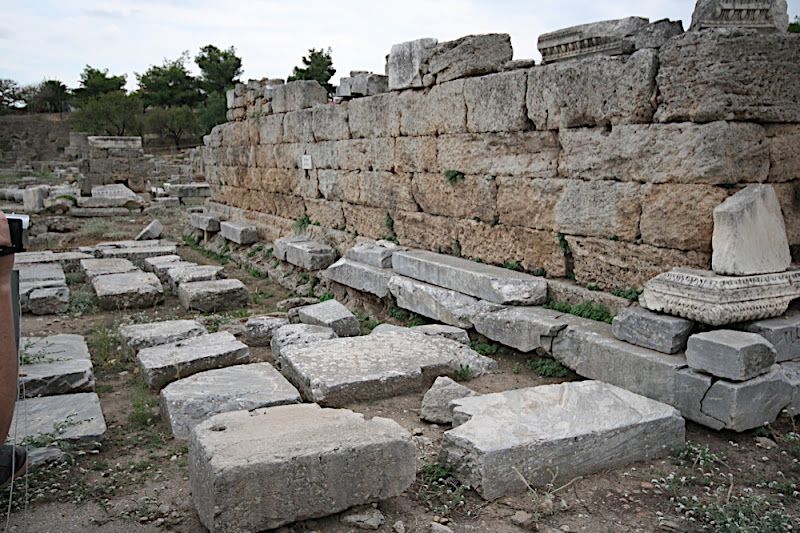 12 But while Gallio was proconsul of Achaia, the Jews with one accord rose up against Paul and brought him before (AC)the judgment seat,

13 saying, “This man persuades men to worship God contrary to the law.”

14 But when Paul was about to open his mouth, Gallio said to the Jews, “If it were a matter of wrong or of vicious crime, O Jews, it would be reasonable for me to put up with you;

15 but if there are questions about words and names and your own law, look after it yourselves; I am unwilling to be a judge of these matters.”

16 And he drove them away from the judgment seat.

This is one of the only geographic points we have for Paul’s visit – so as we stood here and looked around, not only could we imagine the streets alive and an impending riot being quelled by Gallio’s prudent judgment, but we were standing somewhere where Paul himself stood, and where an event of some significance in the New Testament occurred. Gallio’s judgment, and reputation as a juror, meant Christianity was suddenly a legal religion in the empire.

There have been a couple more “aha” moments that will doubtless be the subject of subsequent posts. Stay tuned for our visit to a real castle. It was incredible.

Fairy Tales and fantasies have been the staple fictional diet of children for many years. I caught the Brothers Grimm flick in one of my rare moments sitting in front of the TV without watching sport (including wrestling) the other day. The Brothers Grimm were a couple of oddball German professors who spent their time collecting and documenting folk tales and fairy stories for the amusement of the masses. The movie suggests the Grimms were always pursuing these tales in the hope of striking some truth – when in fact they were collecting stories for the entertainment of children.

It seems to me that Titanic director James Cameron is a modern day Grimm. Cameron who made his name directing the “true story” of a sinking ship is currently promoting his latest project – a documentary – on the discovery of the coffin of Jesus Christ. Fact and fiction are difficult to disentangle – particularly through the filters of history and science. Cameron was quick to jump on the Dan Brown bandwagon fueling speculation that Jesus had a family with Mary Magdalene based on fragments of the gnostic gospels.

In my discussions the other day on philosophy, religion and the meaning of life I argued with some intellectual atheists (which is almost a contradiction in terms – intellectually it’s much safer to be agnostic) that my faith hinges not on the science behind the bible but its historicity. There’s an old question meant to encourage liberal theological thought – “If the bones of Jesus were discovered – would this change your faith?” The politically correct answer to that question is “no” – the theologically correct answer is of course yes. The resurrection of Jesus is of fundamental importance to orthodox Christian belief. The Christian faith depends on its historical credentials. Authenticating “history” is an incredibly difficult task – we need to analyse what we read with archeological findings and historical context. The fact is, we really can’t be sure about what happened hundreds of years ago – let alone thousands. We weren’t there to see it, feel it, hear it, smell it, or touch it. Whenever we’re told of something that happened outside our “experience” it should be questioned, poked, prodded and examined. One of my favourite novelists, Robert Rankin wrote a book called the Witches of Chiswick about a powerful group of witches who decided to completely rewrite history at the turn of the 19th century. This idea is clearly fiction – or is it? We can’t afford to rule out every theory or every piece of documented history simply because we weren’t there. Context is king. When considering a claim it’s important to consider motives, underlying social factors… all these tests need to be applied not just to the bible but to every crackpot theory that comes up questioning its veracity. When it comes to the bible – the disciples and early leaders of the church were prepared to die pretty horrible deaths (not just your run of the mill death but you know, being burned alive or eaten by lions) for their beliefs – I’d like to see James Cameron put his money where his mouth is at this point. Neither Buddha or Muhammad – founders of two of the other “great” (numerically) religions of the world were forced to die for their convictions and nobody is out there in public questioning the historicity of their lives. It’s hard to find a genuinely accepted religion where the founder has received material benefit from their teaching (Scientologists and Mormons are no exceptions to this rule). So it strikes me that the assessment of the Israeli archaeologist who investigated the original discovery is probably worth listening to…


“It’s a beautiful story but without any proof whatsoever.”

Although I guess Christianity’s critics would say the same thing…