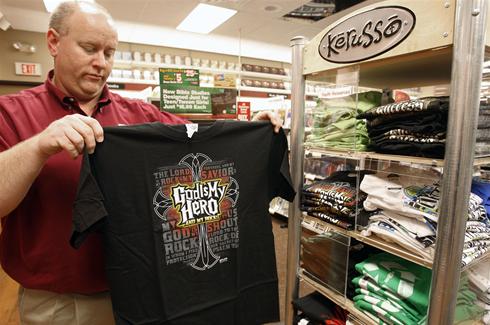 Trademark attorney Michael G. Atkins of Seattle said legal parodies of commercial trademarks are protected under the First Amendment, but such religious products generally don’t fall into that category.

“You could take Microsoft and change their logo around to make fun of Microsoft, and that would be legal,” he said. “But I can’t use the Microsoft logo to promote my Christian theme because there’s no real connection there. That’s illegal.”

Here’s what one of the creators and purveyors of Jesus Junk had to say for himself (as reported in the USA Today story)… Kerusso is the company responsible for producing a bunch of terrible shirts.

Kinnett views the commercial spoofs — which only make up 15% or so of Kerusso’s merchandise — as modern-day parables.

“If Jesus were here today would he make parody T-shirts? I doubt it,” Kinnett said. “But in his day, he did use parables. He used things that were common and recognized in everyday life to make a point or say something with a deeper meaning.”

* I still think Christian copyright holders should not “hold” their “rights” for the sake of the kingdom – but if they don’t then the end users have to respect that decision (and the law).