First it was football free kicks and tracking the path of the ball in flight, then it was baseball – and finding the most efficient path around the bases – now mathematicians have turned their attention to basketball. And the free-throw. 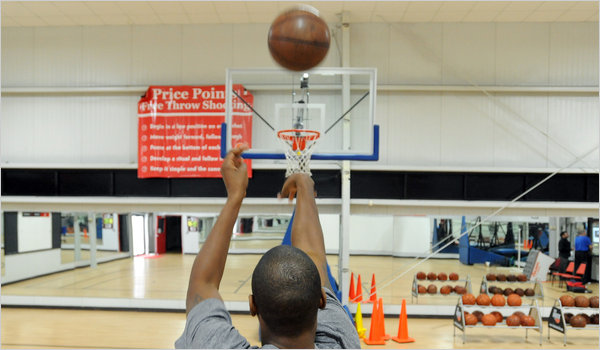 You may already have seen this gravity defying shot on YouTube…

8 million people have in a pretty short amount of time. So nailing the perfect free-throw is no doubt something lots of people care about. Not me. I hate basketball. Even though I’m 6’3. I’m rubbish.

It turns out 45 degrees is the perfect angle for a free throw shot. So says this study reported on by the NY Times. Some people probably knew that already. It shouldn’t be too hard to work out. The distance from the line to the hoop is constant. The height of basketball players is a variable, but there’d be a pretty small standard deviation from the average (very tall). This story is actually about a shooting school for basketball players like me. But players who want to spend thousands of dollars being better. It deals with this guy named Andres Sandoval (who is in that photo).

“As the free throw swishes, the building’s silence is broken by a disembodied voice announcing “46.” Another nothing-but-net, another “46.” Sandoval follows with one more 46, a 43 and a 49, all of which reflect the angle of the ball’s arc.

At courtside, the device speaking in a computerized monotone has snapped high-speed digital photographs of Sandoval’s shots and combined them. The composite is displayed on a screen, with color arcs tracking the trajectory of each try. The ideal for a standard player is 45, though Sandoval earns a solid green.