Parenting is fun. We love it. Getting advice about parenting, well, that’s a mixed bag. Some is helpful. Some is odd. Most is well intentioned. Some is revenge for the years of pain I’ve inflicted on other people’s kids.

Here’s my number one piece of parenting advice. Buy your child this kid’s Bible. The Jesus Storybook Bible: Every Story Whispers His Name

. For less than $12, excluding postage, you pretty much can’t go wrong. It’s brilliant. We’re on the third lap. It is well written, it is theologically astute. You’ll probably learn something about how to make Biblical concepts clear enough for kids. 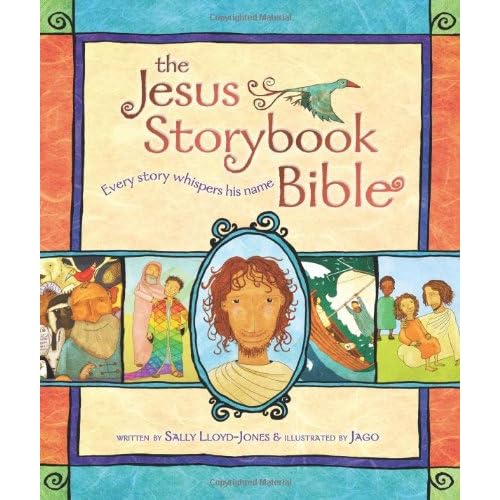 It’s a sensational example of why a Christ centred Biblical Theology brings the whole Bible together.

I finished my “cool stories from the Bible” kid’s talk series at church this morning with the story of Samson. Before I get onto posting the story there were a heap of cool parallels between Jesus and Samson that I didn’t cover in this story – he’s betrayed by someone close and taken to enemy headquarters for the purpose of mockery before dying to save God’s people. I covered the last bit – but not so much the betrayal/public spectacle. Check it out.

Do you want to grow up with big muscles? I do. Have you ever seen those really big strong warrior guys who have arms so muscled that they look like they could lift just about anything? Do you want to be strong? Well, today’s story is about the world’s strongest man.

His name was Samson. We’ll start this story before he was born. Samson’s mum was old and didn’t think she could have babies. But an angel came to visit Samson’s parents to give them some good news.

The angel told them that they would have a special baby. Who would be set apart for God. This baby was not allowed to cut his hair. And he would grow up to save Israel from their enemies. By being big and strong.

Samson grew up to be big and strong. One day a lion attacked him and he ripped it apart with his bare hands.

One day he went out to fight the Philistines. He tied a fiery torch between the tails of 300 jackals – animals a bit like wild dogs – and sent them running, with their tails tied together into the Philistine’s farms – burning all their food. He was very clever. Then he killed lots of them.

Samson was so cool. He was a bit like Batman. He lived in a cave.

The Philistines didn’t like Samson very much. They got an army together to march to Israel to demand they hand Samson over to them. They wanted to kill him.

So the nation of Israel decided to hand Samson over to the Philistines. They tied him up. But do you know what happens when you tie up a really strong person? They flex their muscles. And the ropes break.

So that’s what Samson did. He was surrounded by Philistines. He broke the ropes. He escaped. But he didn’t have a weapon. So he picked up a donkey jawbone from a nearby skeleton.

Samson got into a bit of a pickle. He trusted a lady Philistine – who wanted to kill him…

He loved this lady Delilah – so eventually he told her his secret. And she betrayed him. The Philistines cut his hair while he was asleep.

Then they captured him and poked out his eyes. And they turned him into a slave.

The Philistines were so excited to have caught Samson they decided to have a party.

They brought Samson up to humiliate him.

Fancy buildings in those days were held up by stone pillars. Samson asked the guards to place him between the pillars so that he could stand up. And he prayed to God to give him strength one more time. His hair was growing back.

Samson prayed to God, and then reached out his hands and placed them on the two pillars. He pushed. And pushed.

He pushed with all his strength and the whole building came down. As he pushed he prayed “let me die with the Philistines”. And he did.

And you know what, Samson was very strong, but he actually wasn’t the world’s strongest man.

Do you know who is? Samson stretched out his arms and died so that other people. God’s enemies. Would die.

Samson might have been really cool because he lived in a cave – but Jesus is heaps cooler because he came back to life in a cave. And he’s heaps stronger because by doing that he saves the whole wide world – including you, and me.

The Brick Testament made another appearance at church this morning. Last week’s story about Ehud the Ninja was always going to be hard to top. I went with another story from Judges (the one just after my least favourite story in the Bible).

Jephthah did something silly – but then he kind of redeemed himself a little, teaching a rogue tribe of Israel a lesson in the process. Jephthah was like a secret agent. Because all secret agents have passwords. It’s how they identify themselves to their helpers and friends in foreign countries.

As an aside – has anybody else noticed that the story of Jephthah and his daughter is exactly the same storyline as the Beauty and the Beast, and that he’s essentially Robin Hood.

Today we’re going to learn about a guy who was a bit like a spy. A secret agent. Who here wants to be a spy when they grow up? Does anybody know about any spies?

Today we’re going to learn a story about a man named Jephthah. He was the leader of Israel a little while after Ehud.

Jephthah went off to fight some of the enemies of Israel – called the Ammonites – but one group of Israelites – didn’t help with the battle. And then they got angry at Jephthah and decided to fight him…

So Jepthath and the army of Israel fought against the Ephraimites.

And they drove them all the way to a river. The Ephraimites couldn’t beat Israel so some of them ran away.

Later, some of the survivors came back to the battlefield and tried to cross the river. But Jephthah, being a clever secret agent, came up with a plan to stop any of the Ephraimites escaping.

Ephraimites had different accents to the people from Israel. They were a bit like people from New Zealand and us. Have you ever heard a New Zealander say “fish and chips”. It sounds a bit different to how we say it. Well, there was a word that the Israelites said differently to the Ephraimites. Shibboleth. So Jephthah made that word the password. And he told his men at the river to check how people wanting to get past said the word.

And the Ephraimites couldn’t do it.

And when they couldn’t do it the Israelite “secret agents” judged them, and killed them.

We’re a bit like the Israelites. And Jesus is a bit like a secret agent. See, one day, God is going to judge the whole world. A bit like Jephthah judged the Ephraimites. And we have a password – a bit like Shibboleth – a password that God uses to sort people out.

And do you know – that if you like people, and you want them to be part of God’s family – all they need is the password. They need to know that Jesus died for us, and them too. And because he died for us – we know the secret password.

For the next three Sundays at Willows Presbyterian the “kids spot” is going to be filled with my favourite stories from the Bible.

I’m kicking it off with Ehud and the Moabites. Ehud is cool because he’s disabled (left handed) and a ninja. I’m going to use Brick Testament pictures.

In the Bible there’s a book called Judges.

It’s about some people God uses to save his people from their enemies.

They’re not special people – most of them are normal people, just like us.

His name was Ehud. Being left handed wasn’t much fun. He was different to the other soldiers in Israel’s army.

When Ehud was a young man Israel was being treated very, very badly by a very, very, very fat king called Eglon. Eglon demanded that the Israelites pay him lots of money so that he wouldn’t do nasty things to them.

Ehud and the Israelites didn’t want to serve this king – they wanted God as their king – so Ehud came up with a plan.

He made a short sword and put it on his right thigh under his cloak – because in those days guards didn’t expect to see many left handed people they only really looked on the right.

…and he told him that he had a secret for his ears only.

The bad King Eglon sent his people out of the room.

And Ehud took out the sword – and buried it in his tummy.

King Eglon was so fat that the sword disappeared.

The guards thought the king was in the toilet – so they didn’t disturb him.

Ehud got back to the Israelites and they attacked the fat dead king Eglon’s army and killed them all. They were free from the bad king Eglon and free to serve God – their king.

Ehud had saved God’s people – even though he was left handed.

We are a bit like Israel – we need God’s “judge” to save us from a bad king that’s ruling our lives. We are being ruled by our sin. We want to push God to the side and treat sin as the fat ugly king of our lives.

We need to get rid of this fat ugly king just like Ehud did. And you know what – we have a ninja savior too. Jesus is a bit like a ninja. He dealt with sin in a sneaky way. People were expecting a strong and powerful saviour who would come and kill sin.

Do you know how Jesus got rid of our sin?

This was something a ninja would do. It was sneaky – because people weren’t expecting it. And it was effective.

We need to stab sin in the heart. In fact, the Bible says that if we want to follow God we should cut the sinful parts out. It doesn’t mean
with a sword.

We need our own saviour to cut that sin out – we need Jesus.