Somebody showed me this movie poster the other day and I thought it was a joke. A bad joke. A bad joke about tough guy church planters. But it’s not. It’s real. And cool.

The guy the movie is based on is real, and actually sounds pretty cool. His name is Sam Childers. He built an orphanage in South Sudan and started leading armed missions to rescue kidnapped children. Hence the name.

“Slowly the orphanage began to take shape. During the day Sam cleared the brush and built the huts that would house the children. During the evening, he slept under a mosquito net slung from a tree: bible in one hand, AK47 in the other.
Meanwhile, in Pennsylvania, Lynn and Sam’s daughter Paige fought a battle of their own. The family car was repossessed and a foreclosure notice was issued on the house. Sam had enough money to pay the outstanding mortgage or finish the orphanage. He couldn’t afford both so he sent the money to Africa.

With the orphanage finished, Sam began to lead armed missions to rescue children from the LRA. It wasn’t long before tales of his exploits spread and villagers began to call him “The Machine Gun Preacher.”

I just spent the weekend at Y-Net – a great camp for Queensland Christians interested and involved in youth and children’s ministry. It reminded me (when I wasn’t cooking or making coffee) that finding good videos on YouTube is probably just as important as finding the dross I normally dig up.

I quite enjoyed this one – though I’m not sure how well it translates to the Australian market.

Also good, and powerfully compelling, is this Brian Head Welch testimony, he’s the ex-guitarist of the band Korn.

Anybody got a good video I should add to my collection of good videos? Snakes in the bathtub and Friday parodies won’t cut it this time… (though if you have something like that, send it to me…)

This video is doing the rounds and it is too bad for me not to post. A yoof leader explains sin by playing with his pet python in his bubble bath. There is no innuendo in that sentence. He literally has a snake in the bath.

It probably isn’t. I can’t claim to speak for Jesus. I can claim to be faithfully reading and teaching God’s word. But I don’t need the spiritual gift of discernment to know that this is excessively stupid. And only moderately more stupid than preaching this sermon series:

“We’ve all said it; sometimes it’s the only words we have to describe our life… all F’d up! God doesn’t intend for our lives to stay that way, instead He turns our life around through His grace and forgiveness. With His strength and the help of true friends we can move forward. Life doesn’t have to stay All F’d Up!”

See, in this case they’re not even bothering to couch the language as some sort of adoption of the letter F. They’re just being contempervant. Where contemporay meets relevant in portmanteau glory.

One step better, but still incredibly stupid and naive, is the attempt to reclaim the letters WTF for the sake of your church community. 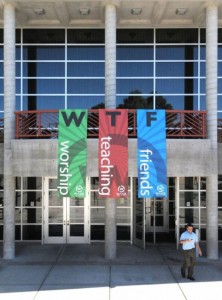 Does anybody actually think this is a good idea? This is why branding professionals exist. To stop you doing what you thought in the shower (when you were really tired and recovering from a bout of delirium, before you’d had your coffee) was a good idea. It’s not a good idea. It’s a dumb idea. You don’t want people looking at your church sign and responding with the very thing you’re trying to rebrand. It’s just a dumb idea.

“We are aware of what ‘WTF’ originally stands for, and that is actually why we chose it,” says Rob James, with Copper Pointe Church, the Albuquerque, N.M., church behind the college and young adult ministry, Wake. “It is something that our target audience is very familiar with. We are a progressive college group located in Albuquerque, N.M., and we know that any college-aged person is a phone-weilding, text-sending machine. So why not use what they are familiar with?”

“WTF” was on purpose. In fact, it’s a main cornerstone in their branding. Their url is wakeWTF.com, their Twitter handle is @WTFisWake and their Facebook page is Facebook.com/WTFisWake.

This is just bizarre. Watch this video.

That, friends, is a video trailer for a sermon series. At North Point Church.

Here, if you can stomach the intro again, is the first sermon from the series.