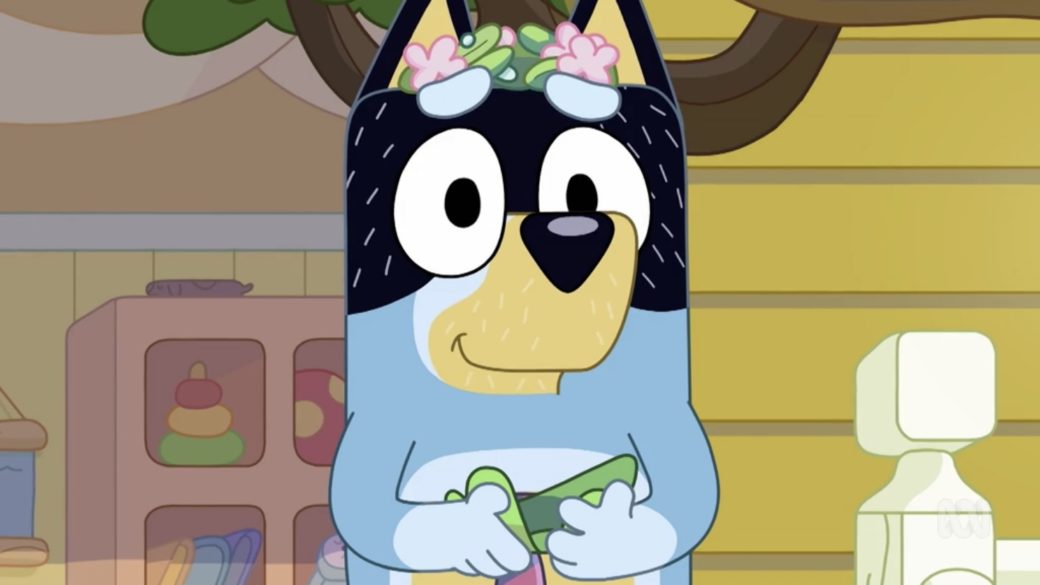 That’s not a typo. Praying is obviously highly recommended too.

It’s time to go to work. The kids are restless, they ask their father to stay and play with them. “I can’t kids, I have to go to work.” The kids are relentless, and this father stops to enter their fantasy world for a time. When he eventually leaves the game to head off for the serious business of work, his children give him a parting gift. A texta wrapped in a leaf. Not much. But when the children’s mother asks what the kids gave their dad, he says “they gave me everything.” Bandit Heeler, for those not in the know already, is the impossibly heroic role model served up by Australia’s number one kids television show, Bluey. Like many Aussie families we had the launch date for season two on the family calendar, and the episodes so far have not disappointed — some have landed very close to our family’s daily experience navigating parenting life in our home city of Brisbane, the city Bluey’s animated world draws heavily upon for its backdrops. This week Bluey won an Emmy.

In Bluey, play is serious business. The timing of this series could not be better with families around the nation facing “social distancing” measures and school slowdowns meaning lots of parents are juggling working from home with supervising their children. If your kids are like ours they know enough about Covid-19 and its disruption of their normal lives to be both upset and anxious. Navigating this moment as a parent, without fuelling anxiety or traumatising our kids, seems almost as impossible as imitating our cartoon friends Bandit and Chilli in the best of times. It turns out establishing a routine of playing with your kids might be the key to their wellbeing (and maybe for yours as well).

Our youngest daughter is at kindergarten this year, she’s the same age as Bingo, Bluey’s little sister. Our kindy is one of many fantastic kindergartens around Australia that has not just embraced a play based pedagogy, but works hard to instil play as a core value for parents trying to navigate our increasingly not play based education system. Not anticipating a global pandemic, I volunteered to be President of our kindergarten’s management committee this year, and I’ve been impressed by our director’s resilience through the early moments of this disruption, and how non-anxiously she has managed the uncertainty around school and kindergarten closures. There’s a stream of research that suggests she might have put the hard yards in to produce this resilience by spending much of her adult life not being serious, but playful. Play is something of a ritual for her, and for the kindergarten community.

Jewish Rabbi and therapist Edwin Friedman wrote A Failure of Nerve: Leadership in the Age of the Quick Fixin 2007. His book coined the idea of a ‘non anxious presence’ being the key to both challenge anxious systems and to lead change well. He drew significantly on his understanding of family systems and the way they shape social institutions from the ground up; someone trained or habituated to respond anxiously to disruption in family life will respond that way in the workplace as well. One of his fundamental insights was that a condition he described as ‘seriousness’ was a shortcut to anxiety; he believed a cultivated playfulness helped families and other systems become more resilient and less anxious. Friedman observed that one thing that separates mammals from the rest of the animal world — an aspect of life that makes us more highly evolved — is our capacity for playfulness; you can play with a pet dog, but a pet turtle will not engage in anything but the serious business of survival. Covid-19 is a serious disruption to our lives; a big issue; but Friedman would have us remember to play, lest the seriousness and our anxiety around it crush us and our capacity to innovate, recover, and move forward. “In an atmosphere where everything is dire, a vicious cycle develops, as a loss of playfulness destroys perspective,” he said. This is not quite a call to play the fiddle while the world around us burns, but rather a call to build resilient people who can tackle the difficulties before us with a shared ritual of play. The teachers advocating an expansion of play based educational strategy are right: play is formative, and while it might seem counter intuitive, if you have not had a lifetime of being formed by play, which is quite possible in an age that emphasises serious business (and so has sought to eradicate play from the education system after the earliest years) now is a good time to start.

Through all their ups and downs, the Heeler family is a non-anxious system; a model for our families through these uncertain times. And the core ritual shaping and driving their family; the binding agent in the love that glues them together; is play. We could do worse than sitting down in front of the TV with our families during this pandemic, then finding ways to imitate the play at home games that families around the country have already incorporated into their daily liturgies.

I’ve used these religious words like ‘ritual’ and ‘liturgy’ deliberately; the formative power of play is consistent with the Christian tradition that we are formed by our disciplines; habits we work on until they are written into our hearts and minds; rituals we enact until they form our character. The Christian tradition has often been accused of taking itself too seriously, but there has been a stream of theologians and philosophers (even Plato) emphasising the important spiritual discipline of play, and play as an expression of divine playfulness (remember, God made the Platypus). If play is hard-wired into our DNA as an evolutionary feature of our humanity, it is part of the image of God; the essence of our humanity. German theologian Jurgen Moltmann wrote A Theology of Play in the 1970s, he says an apt description for us is homo ludens (the playing man), as he wrote he observed playfulness being excised from the serious business of work and the economy, calling this an expression of foolishness that undermined our humanity (though he saw the post-Reformation church being responsible for this outbreak of seriousness). Moltmann, looking to the revolutionary playfulness of Jesus in the face of the serious religious establishment he challenged, called Christians to return to a ritual of play, wresting control of our lives from those insisting on seriousness, in order to see revolution and change. How we play now, in a crisis, will shape how we, and our children, tackle the future. “We enjoy freedom when we anticipate by playing what can and shall be different and when in the process we break the bonds of the immutable status quo,” Moltmann said.

Bandit is right. Play with your kids during this period, they might give you everything.