Townsville’s esteemed local rag, the “Bully” is series of stories highlighting a scandalous use of personal time by a local city councilor who is daring to moonlight as a radio commentator for Cowboys games. Shock Jock horror. It’s a nasty campaign determined to boot the councilor out of the roll he held prior to being elected.

They’re going on and on about how it shows he’s not a 24/7 councilor. The counter argument is that he’s simply making money from his hobby.

Both arguments ignore the fact that the council actually entered into some form of ownership agreement a major sponsorship agreement with the Cowboys and thus he is simply promoting a council asset. Not to mention the $72 million economic impact the Cowboys have in Townsville – which he no doubt helps to promote by spruiking the product over the radio.

The campaign proper has been underway for two weeks now. Here’s part one of my take on the candidates for Townsville’s three seats:

Mandy Johnstone – Labor’s factional darling somehow got the nod to replace Mike Reynolds, the seat’s former member. It says a lot about Mandy Johnstone’s campaign that her campaign website features a prominent photo of Anna Bligh and a tiny photo of Mandy Johnstone.

She seems nice enough – but is yet to make any impression on the campaign, except for an announcement of $10 million in funding for the Jezzine Barracks development.

Murray Hurst – The LNP picked a former Cowboys Coach with some experience as a Thuringowa City Councillor to run for the seat – at the time they had no idea who they’d be running against. Hurst has visibility, has a connection to the city’s most popular icon, and has some experience in government – what he doesn’t have is the ability to make any promises on anything before “he gets into government”. Oh, and he annoyingly drops a football metaphor or reference to his coaching experience into political discourse at the drop of a hat.

Jenny Stirling – we all know how I feel about the environment – and in particular the Greens. Jenny Stirling is largely to blame. Every time she speaks I want to punch myself in the face. If I was to act out that compulsion I would be black and blue – she talks everywhere. Anywhere her views can be expressed – be it the Bulletin’s feedback forms, Magnetictimes.com, letters to the editor, her own website, the media… she’s everywhere, commenting on every issue. And running at every election. While I’ve been here she’s run for council, for Mayor, for Federal Government, for the State Government, and now is running again. That’s five elections in three years – and she’s lost them all. Unfortunately her vote is increasing – and she’s probably got the profile to give this election a real shake. She also knows a media opportunity when she sees one.

Murray Hurst, The LNP candidate for Townsville has a problem. He’s been pigeon holed as “the former North Queensland Cowboys coach”. Which he was. In 2001. After that he was a councilor at Thuringowa City Council – a much more credible position if you’re running for election. Unfortunately Mr Hurst has a problem. His campaign strategy seems to be to remind people that he was the Cowboys Coach.

“In many ways it’s like a rugby league team at the highest level,” said Mr Hurst, who coached the Cowboys in the 2001 and 2002 NRL seasons.

“You’ve got to worry about your own backyard without being overly concerned about who you are facing in the election.

“It’s always a case that you’ve got to have a good team behind you. Obviously now with a new opponent, one I didn’t expect, it may be different but it’s me and my team against the Labor Party.

In this interview from the Brisbane Times he goes on to talk about important stuff. Like infrastructure spending and health. But it’s too late. The horse has bolted. If you’re reading this Murray – and no doubt your crack campaign team has a google alert set up to tell you when people are mentioning your name – no more football analogies. This is an election campaign. 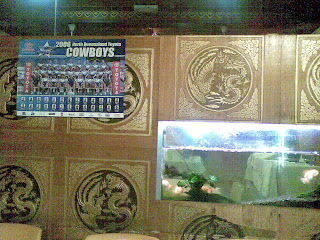 The local chinese takeaway has a rather incongruous cowboys poster to match mao dynasty decor and the obese goldfish.