Ben and Holly’s Little Kingdom is a kids TV show. My almost six year old loves it. The other day she was watching an episode where Nanny Plum, the resident fairy godmother, was undergoing a test for her magic license. She was confronted with a series of scenarios where she would have to solve a problem with magic — and her answer to every question was “turn them into a frog”. 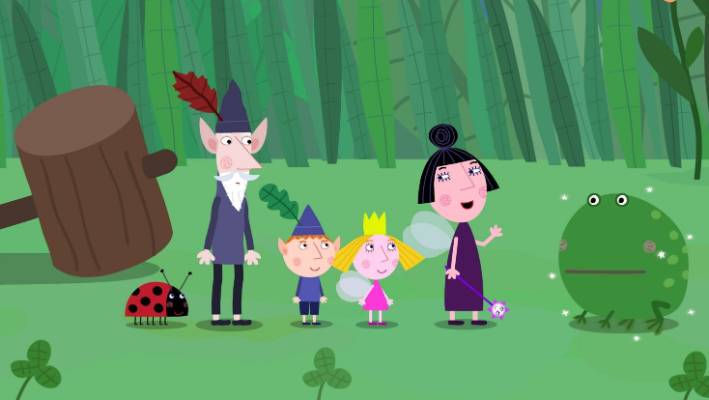 It’s a surprisingly effective tool, that adequately solves many of the problems, but it’s a very blunt instrument, and the tester is maybe looking for a little more.

It reminded me of that old ‘little Johnny’ joke where Johnny is asked a Sunday School question about animals who live in trees and eat Eucalyptus leaves, and he says “Miss, I know the answer is Jesus, but it sure sounds like a koala.”

And it reminded me of a little thing I’ve noticed about the relationship between models of Biblical Theology (understanding how the Old and New Testament fit together), and models of the Gospel message (understanding the essence of the good news about Jesus).

And the real magic is not in a ‘turn them into a frog’ Biblical theology where the answer to every Old Testament passage is “Jesus” with a particularly narrow understanding of the essence of the Gospel, but one where we embrace the sort of circularity of how the reality of Jesus is given depth and dimension by the Old Testament ‘shadow.’ One of the criticisms of a ‘Christ Centred Biblical Theology’ — often the sort picked up in Reformed Evangelical circles here in Australia is that it ends up with a ‘Jesus bit’ tacked on to a sermon, and, experientially, that Jesus bit feels like a ‘penal substitution’ bit tacked on and that can be legitimate, but it can also be a frog where we could have a prince. There are so many rich categories created by rich and deep reading of the Old Testament narrative — around God’s promise to reign as king, about a re-creating day of the Lord that would return people from exile and give us new hearts, about the defeat of Satan and the powers and principalities so that all nations might belong rightfully to Yahweh, the most high, as a fulfilment of our ‘image bearing’ vocation… and the Gospel is that all those threads, and promises, and more are fulfilled in Jesus. That is a Gospel that is not simply “my personal sins can be forgiven if I repent” but that the cosmos is renewed from the throne room of heaven down and repentance is a recognition not only of my sin, but the goodness of this new reality. One way to challenge this is to move beyond a ‘Christ Centred’ Biblical theology that often is reduced to a ‘penal substitution centred’ theology (and again, I’m not saying this isn’t an aspect of the Gospel built for us by a Biblical theology that incorporates, say, the sacrificial system in the Old Testament), to a broader ‘Christotelic’ reading that doesn’t simply impose a Gospel summary/reduction back into the text, but that allows the text to provide categories (and a story) that Jesus then fulfils.

If your Gospel is simply an aspect of the Gospel — a ‘small Gospel’ — whether that’s Lordship, or cosmic victory, or penal substitution and you flatly impose that meaning when digging back into the Old Testament, a proclamation of the Gospel drawing on the Old Testament will end up sounding like Nanny Plum turning everything into a frog. Sometimes I think that’s what’s happening as people get to a passage in the Old Testament that only leads to penal substitution via the crucifixion, rather than a better category (like kingship, or victory, or new creation) and shoehorn that ‘Jesus bit’ onto the end; it’s the “turn them into a frog”… “I know the answer is Jesus” mentality, and maybe we should be allowing the text to give us richer categories, so that when we’re invited just to proclaim the Gospel we have a richer toolkit at our disposal than just “God saves sinners from Hell”…

You can, if you want to apply a blunt instrument, try to make every Old Testament passage about Jesus and reduce Jesus to the substitutionary sacrifice for sin, and it’s probably better than not making the Old Testament about Jesus at all — a surprisingly effective better (in that, I’m surprised, still, by how many modern Christians still have a pretty flat grid that they apply to the Old Testament, seeing it as “Scripture” without recognising our standing as Gentiles, and its standing as Israel’s Scriptures fulfilled in Jesus) — but imagine if you had more tricks in your magic tool kit. Here’s where, as a sidebar, I want to give an obligatory shoutout to The Bible Project, who I think do a great job of expanding our horizon to see more narrative categories and ‘story patterns’ in the Old Testament so that we end up with a richer Gospel.

Imagine if your bigger Gospel — whether that’s in the classically expansive ‘The Gospel is the material contained in the Gospels’ or an integration of atonement models (like kingship, representation, and cosmic victory) — was something you could pull out when digging into Old Testament texts; but also something shaped by the Old Testament texts that give us the categories and messianic/cosmic expectations that Jesus fulfils.

And here’s where the rubber hits the road on a critique like this. I think at times we celebrate frogs — as magic — when there’s a more rich and robust, more enchanting and ‘good’ version of the good news that we should be encouraging one another to pursue. Better a frog magically produced on Q&A than no enchantment at all, and yet, what if we had a real magician?

When the Gospel is proclaimed as penal substitution — that God saves sinners — it can often end up being anthropocentric (that is, it puts us humans at the centre of the Gospel). When, in that context, we talk about repentance it can sound a lot like we’re saying ‘turn from sin because sin is bad and you will face God’s judgment unless you repent’ — and that’s certainly true. But it’s a frog. The deep magic of the Gospel is much bigger than toads being turned into frogs.

The deep magic of the Gospel is not really about ‘me’ at all; it’s about Jesus. The good news about the one who fulfils the Old Testament; the true Israel, the true son of God — the divine and human “son of Man” who through his incarnation, obedience, death, resurrection, and ascension, the pouring out of God’s Spirit, and future return, has begun God’s recreating act by launching his new kingdom; who invites us to ‘repent’ by turning from the old, to the new, which involves receiving God’s Spirit as an act of re-creation and being united with God. There’s so much more magic than just ‘forgiveness of sins’ — though forgiveness of sins is part of our restoration and resurrection; our move from death to life, darkness to light and the kingdom of the now defeated Satan, into the kingdom of heaven… and even that the resurrection is not just a ‘pie in the sky’ heavenly future for our souls, but physical life in God’s kingdom in a renewed heavens and earth, so that our lives now are an expression of the kingdom because we are ambassadors of this future reality and citizens of the kingdom of God now.

There is, of course, some C.S Lewis in the background of this reference to “deeper magic” — and in The Lion, The Witch, And the Wardrobe (and the rest of the Chronicles of Narnia), the ‘deeper magic’ includes penal substitution — but it stretches out to new creation; it includes the effects of being faithfully caught up in that magic on mice like Reepicheep. Here’s Aslan, from The Lion, The Witch, and the Wardrobe:

“It means that though the Witch knew the Deep Magic, there is a magic deeper still which she did not know. Her knowledge goes back only to the dawn of time. But if she could have looked a little further back, into the stillness and the darkness before Time dawned, she would have read there a different incantation. She would have known that when a willing victim who had committed no treachery was killed in a traitor’s stead, the Table would crack and Death itself would start working backwards.“

The deep magic is more than simply one dying in the place of another, it’s the new life that flows from that act. In Prince Caspian the mouse Reepicheep loses his tail in battle, and Aslan restores it, moved by his commitment to Aslan’s kingdom, and as an act of love. The deep magic of the Gospel involves death working backwards as new creation works in — not just sins being forgiven, but restoration to new life found in the kingdom and its king.

“Not for the sake of your dignity, Reepicheep, but for the love that is between you and your people, and still more for the kindness your people showed me long ago when you ate away the cords that bound me on the Stone Table (and it was then, though you have long forgotten it, that you began to be Talking Mice), you shall have your tail again.”

So magic tricks — Gospel proclamation — that looks like ‘here’s a frog’ are all well and good; better than no magic. But what if we do the work of digging deeper into the book of tricks — expanding our understanding of the whole counsel of God, and the Gospel of the Lord Jesus, the victorious saviour and king as its culmination — then maybe our ‘Gospel proclamation’ would do more than just see Jesus as the one who calls us to repent and dies to take our punishment; it might see Jesus as the one who brings a new pattern for life in this world by restoring us to the life and presence of God.

I, for one, am committed to serving up more than frogs in my attempts to do the magical and enchanting work of telling God’s good news story.