Poe’s Law is in effect here people. I can’t tell if this is satire or serious.

Objective Ministries seem to epitomise everything that is bad about Christianity in America. Any “ministry” that contextualises by changing “LOL” to mean “Love our Lord” and then puts it on underpants as merchandise raises serious questions for me:

They also have a “rock” ministry. Jacob Aranza says no.

Their homepage objectiveministries.org promotes a litany of extremist Christian campaigns.

The US is slouching towards secularism because Obama didn’t use a Bible in his second swearing in (after the botched first swearing).

The page features this cartoon…

And an opportunity to pray for France. Because they need it…

This is the type of site we’re dealing with. I am giving you the context so you treat this next point with appropriate gravity.

There is a mission to put a massive crucifix on the moon.

That sentence is worth bolding. I’ll say it again.

There is a mission to put a massive cruficix on the moon.

The page featured a news update about the mission not receiving tax deductible status (there’s now an appeal). If I lived in America, and my taxes went towards putting a crucifix on the moon, I would move to Australia.

The moon campaign follows a similar effort, from a man named Arthur Blessitt (either he changed his name or this is a bizarre case of nominal determinism) to have a cross orbiting as a salvific satellite. That campaign was based on a series of malapropriated Bible verses:

“Then the Sign of the Son of Man will appear in the Sky!
Then all the tribes of the earth will mourn and they will see the Son of Man coming on the clouds of heaven with power and great glory”
Jesus
(Matthew 24:30)

Oh, and a theophany.

Objective Ministries’ moon campaign raises an important question (tangentially) about what happens to people who send their ashes into space when the rapture occurs. Apparently you miss out.

Blessitt’s space mission failed – the ashes transport service he was piggy backing with failed. The ashes were lost. You might remember the story – because Scotty from Star Trek’s ashes were on board. Which proved a distraction for the “Mainstream Secular Media” when it came to reporting the mission’s failure…

When the MSM (Mainstream Secular Media) reported on Falcon 1’s failure, they focused on the loss of the cremated remains of James Doohan, an actor who played “Scotty” on the Secular TV show Star Trek, rather than Blessitt’s more important payload. In fact, the Media didn’t report on the cross payload at all, either before or after the failed orbital delivery.

The Objective Ministries founder had a better idea (since superseded):

I propose launching into polar orbit a cross of significant dimensions, with a sun-reflecting surface that will be easily visible in the night sky to the naked eyes of unbelievers. This space-age testimonial will fly over Communist China, Mussulmanned Saudi Arabia, Hindooed India, Godless France, and all other nations in need of the simple yet profound message of Christ’s sacrifice and His offer of Salvation. All the people of the world will see it shine, like a beacon of hope on the runway of the aircraft carrier of the night sky, an omnipresent reminder of the Lordship of Jesus over our world.

Unlike Mr. Blessitt’s plan, mine will require a more elaborate cross design and access to more costly launch services, as it would necessarily require multiple single-payload launches. Fortunately I feel that my connections within the Department of Defense will help bring this plan to fruition.

In order to be viewable and identifiable as a cross to the naked eye, my calculations show that OCA will need to be at least 1000 feet along its main axis and 500 feet along the perpendicular, and placed into Medium Earth Orbit (between 1,243 and 22,236 miles; dimensions will need to be increased for visibility at higher orbits). By being at MEO, it will be high enough to catch and reflect the Sun’s light throughout the entire night.

But wait, there’s more… a new “Cross on the Moon” campaign has begun in earnest. Here’s what the Objective Ministries people say:

The Cross on the Moon Foundation (COM) is a newly formed, non-profit organization dedicated to advocate, design, and implement the placement of a Christian Cross on the surface of Earth’s Moon in 2011. Besides setting their goals on the Moon instead of Medium Earth Orbit, their plan differs from mine in that they will acquire passage for the Cross aboard a private spacecraft. As of this writing they are still developing the details of the Lunar Cross — two leading candidates include a gold plated one that would be visible from a live HD video feed and one formed from a constellation of reflective targets that would be illuminated by earthbound lasers to make it visible to the naked eye — and the transfer mechanism they will use to plant it into the Moon’s surface.

I do not see their plan as a competitor to my own. Rather, it will be one of the many Crosses that will fill the Heavens to proclaim the Glory of our Lord to all spacefarers of the future. We need Crosses not only in MEO and on the Moon, but on every planet, satellite (natural or otherwise), asteroid, space station, and Lagrange point in our Solar System. No quadrant of our system should be left bereft of the sign of His Sacrifice. Therefore, I welcome COM’s participation in this, Mankind’s greatest pre-Rapture adventure.

Also, given that our current non-Christian Commander in Chief does not share in our common creed and consequently will hinder military involvement in Witnessing Missions such as I propose, COM might represent our best opportunity to place a Cross in the heavens before we retake the government in 2012. But fear not; my contacts in the Palin camp confirm that she will be solidly behind OCA when the time comes.

But the evil “secular” government didn’t want this mission taking place… or at least not with tax deductability. And it’s all because Obama is a Muslim… or so they say…

Cross on the Moon Foundation (COM), a non-profit organization dedicated to the private launch of a space vehicle carrying a Christian Cross to be placed on the Moon, has been denied 501 (c)-3 status by the IRS. The reasons given by the IRS are unclear and seemingly contradict the granting of 501 (c) status to other organizations — namely the Lunar X Prize Foundation — engaged in similar private, Secular space missions.

“Secular” appears to be the operative word. While COM President M.N. Clark remains restrained in his words (he still hopes to negotiate and appeal the ruling), it is clear that this decision is a political one based on anti-Christian bigotry handed down from on high in the Obama administration — possibly coming directly from the President’s desk.

How can we know this? It’s a matter of simple deduction: Muslims consider the Moon to be sacred, and would never — if in a position of power to dictate such things, as Obama now is — allow a symbol of Christianity to be erected there. The denial of tax-exemption is not only consistent with Obama’s crypto-Muslim leanings, it further confirms them. This — combined with institutional pressure from Evolutionists deeply entrenched in NASA who want space to remain a Christ-free environment — means that COM will likely never get the tax-exempt status, nor the government issued launch certifications or safety documents that the IRS claim are necessary, as long as the current regime is in power.

Yeah. The current regime is holding us Christians back from our plans to dominate the heavens. The heavens that the Bible says already declare God’s majesty and existence (Romans 1, Psalm 19)…

But wait… there’s more… an update…

Our intercessory prayers have convinced God to alter the mind of the IRS agent overseeing COM’s case and he is now allowing the case to be reopened following a minor change in COM’s by-laws. Glory! But COM also still needs our help in the form of donations. COM President M.N. Clark explains why:

This is probably a good time to summarize why we are asking for donations. First we believe in having a personal relationship with God. Placing a cross on the moon will encourage theological dialogs. Already discussions have begun, mostly on confused atheist web sites. That’s ok. Our God is the creator of the Universe. The more we study the person and the works of Jesus, the stronger our faith becomes. The donations are needed to send the cross to the moon. Several companies are testing components so they can be the first to claim the Google Lunar X Prize, a 501 C-3 philanthropic organization. We need donations in preparation for sending these companies an RFQ (request for quote). If our resources are enough, we will place a physical cross on the moon. Obviously the size of the cross would have significant restrictions. A lower cost option might be to place a cross decal on the rover.

No target is too small for Objective Ministries – they also want to shut down anti-Christian parody site Landover Baptist (perhaps so that people don’t confuse their own site with parody) because, Christians own the internet.

The Internet was created by the United States of America – a Christian nation [ref. 1, 2, 3] – and should not be used to spread anti-Christian, secular, or non-Christian propaganda and hatespeech. This is our Internet, and we should exercise our position as its owners and as the guardians of civilization to stop its misuse.

Perhaps my favourite bit, and the thing that led me to the site in the first place, is this children’s guide for dealing with scary atheists… 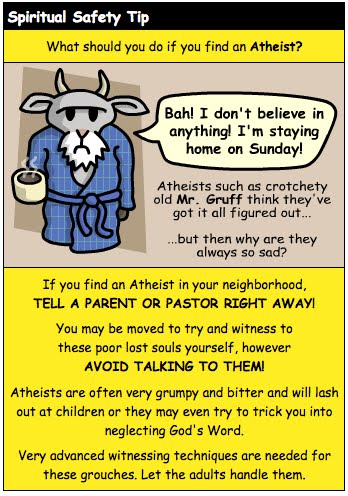 You know what the world your desk needs more of… Spiderman merchandise. Not just any old merchandise. Functional USB merchandise. Here are four “must haves”* for your cubicle. A Spiderman Can Fridge

Most of these were found at Foolish Gadgets – all of them are pretty silly and available in alternate but equally marvel-lous versions from the retailer.
*If you’re a Spiderman fanatic or work for Marvel Comics