I love elections. I love voting. I love watching the coverage. I love the post campaign dissection. Even when I hate the candidates equally, all those loves still apply.

On the outcome
A hung parliament presents a fascinating political landscape. It could either see us back voting again in three months or produce an incredible picture of the democratic process. I reckon the only thing that will get in the way of the latter is egos.

I have tremendous respect, as a former North Queenslander, for Bob Katter. The Kennedy electorate is geographically huge (the biggest in the state, and representing a third of Queensland I think), and the electorate loves Katter. Some people try to claim the maverick moniker, and there is nothing more culturally awkward than someone trying to give themselves a nickname – but Katter has truly earned his maverick stripes. He’s more maverick than Tom Cruise. 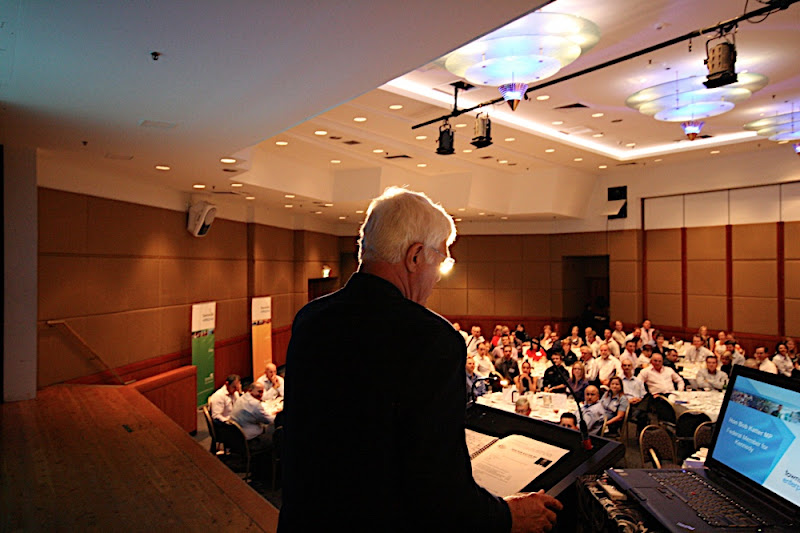 Image Credit: Me, here’s Katter speaking at the AGM for my old employer.

I think the other independents are men of equal integrity and I look forward to them coming in from the sidelines of parliament.

I know that Katter has been waiting for this for a long time. He spoke quite publicly about the possibility of holding the balance of power after the 2007 election.

I can’t see the three MPs siding with Labor – I think their constituents would probably not be too enamored with that idea.

The Greens have been called “the only clear winners on the night” and they are a force to be reckoned with – but I don’t think they’re going to hold the power they think they will in the senate because I think they are likely to find the ALP and Libs agreeing on more things than they think. I think Bob Brown calls every election result a “greenslide” and claims the emergence of the Greens as a new third party on the political landscape at every turn. They’re not new anymore, and they are going to consistently poll at around 20% forever, or at least as long as they try to merge being compassionate and environmentally progressive with being radically anti-conservative. They’ll always split the ALP vote rather than winning votes from the other side.

I actually think that the two major parties are much closer in policy and in philosophy to one another than they are to any of the loose cannons jostling for influence. Wouldn’t it be great if Abbott and Gillard sat down together and said, you know what, why don’t we put together a cabinet dream team featuring the best and brightest from both our parties – and treat each issue in parliament on its merit. Someone, I think it was Andrew Bolt, suggested that Kevin Rudd should be the speaker – because it would simultaneously stroke his ego, get him out of the hair of the party who blame him for their loss, and fulfill Gillard’s promise of a senior position for him in the new parliament. Not a bad idea.

Some other little tidbits – I was disappointed to see Ironbar Tuckey lose his spot as the “mad-uncle” of the Libs, abd as one of the true characters of Australian politics, although the new National Party guy in the seat has real potential. I thought the tale of two Wyatts was pretty fascinating too – with the youngest representative probably ever in Wyatt Roy showing that he was a born politician with his ability to stay on message under pressure and his overuse of cliches, and the first indigenous representative Ken Wyatt looking the goods in Hasluck (could headline writers have picked a better name for the electorate which may decide the fate of politics in our country?).

I channel surfed for most of the coverage the other night. I even, very briefly, watched SBS. I thought the integration of Twitter into the coverage was largely pointless, but served to provide some light relief. Twitter does have huge potential as a means for taking the pulse of the electorate – but it needs to be more than just a small group of people using the same hashtag for it to be truly worthwhile. I don’t know many people outside of the media who are over the age of forty and using twitter.

Channel 10 – though mostly light on substance, the 7pm project team provided relief from Lisa Wilkinson’s eyebrows and Kochie’s annoyingly high pitched voice on the other two commercial networks. Their vignettes on the campaign filled the hour before counting began nicely, though curiously when the going got serious the network switched to AFL.

Channel 9 – had the most dynamic, and thus the most interesting, panel of the night. Karl and Lisa did their jobs as comperes admirably for the most part – in the scripted bits anyway, and while it appeared they completely lost control of the guests, they stepped in just at the right time – controversy is good for ratings, but snide bickering is not. Barnaby Joyce should be given his own show – the quote of the night came when he tried to ask Tony Windsor and the New England MP described him as a “fool” who wasn’t worth listening to. As the night wore on it appeared that Nine were experiencing technical difficulties – but only with his microphone. Funny that. Peter Costello was amazing. Every time the camera cut to him while a Labor figure was talking he had that Cheshire Cat grin going on. He was everything a panelist should be, and much less prone to going for the jugular than the other two right-wing reps. Michael Kroger tried to virtually maul Wayne Swan during a live cross – with the treasurer taking umbrage at the criticism, Barnaby joined in making the interview one of the most awkward and most compelling pieces of television.

Nicola Roxon was a credit to her party – and gracious in what was essentially a defeat. Mark Arbib showed why he wields such power as one of the Labor party’s “faceless men” – he was involved in the takedown of K-Rudd. Michael Kroger is essentially his equivalent in the Liberal party – and his constant cat-calling for union supremo turned politician Bill Shorten to take the party reigns seemed a little too close to home for Arbib.

The only black mark on an otherwise pretty sterling performance was the presence of Julia Gillard’s biographer, journalist Christine Wallace. Her myopic view of the election results and constant defense of Labor’s results (the lowest primary vote for a major party since World War 2, possibly an historic ousting of a first term government, the apparent loss of 16 seats, etc) was almost as annoying as the group of women at J-Gill’s party cackling in chorus “Abbott’s got no mandate” as if that made the results more palatable. Both major parties were essentially repudiated by the people – but the LNP at least has a silver lining. Wallace was snide and annoying.

Michael Usher’s virtual parliament was just as annoying. An over the top use of technology that served no purpose except to associate the coverage with the aesthetic of a mid-1990s first person shooter, or that dizzying Windows 95 screensaver that featured cartoonish brick walls. Their “dead ducks” section was amusing once. But only once. And they trotted it out over and over again with the same people and no new results.

Red Kerry’s ALP/ABC gaffe was one of the only parts of the night that made me laugh out loud. His excuse, that the “letters are too similar” was pretty funny too.

His defense of Maxine McKew after her extraordinary outburst in an extraordinary interview was heartwarming – because nobody deserves to be compared to Cheryl Kernot.

Antony Green, Nick Minchin and Stephen Smith are the A-list of election night panelists. It’s no wonder they rated the house down.

Seven
Kochie is annoying. Peter Beattie is annoying. I can’t even remember what other panelists they had. Their coverage was annoying. Oh yeah. Alexander Downer. Don’t get me started on him.