It’s hard not to be excited about SpaceX and the launch of Falcon Heavy.

Elon Musk seems like a pretty fascinating guy — he’s stepped into the space in the popular imagination previously occupied by Steve Jobs and, like Jobs, there’s a sort of ‘religious mythos’ developing around him. He’s a certain sort of messiah; note, for example, his stepping in to save South Australia with a massive renewable energy project.

It’s hard not to get caught up in the hype — God even drives a Tesla (at least at Hobart’s MONA).

Perhaps my favourite part of the Falcon Heavy experiment — environmental/spacejunk concerns notwithstanding — is the launch of Starman, a new cosmic driver exploring the infinite universe in his very own Tesla car. Starman — who spent the trip into orbit beaming back images from the vast cosmos to earth. He’ll tour the galaxy perhaps for the next few million years (unless an asteroid gets him first). What a testimony to Musk’s unique genius — what a legacy — his are the hands that flung Starman into space. You could watch live views from the car on YouTube — have the far flung reaches of the galaxy (once he hits orbit he’ll be 28 million miles from earth) beamed onto your personal device.

That’s, quite literally, awesome. I’ll be checking in with Starman from time to time. 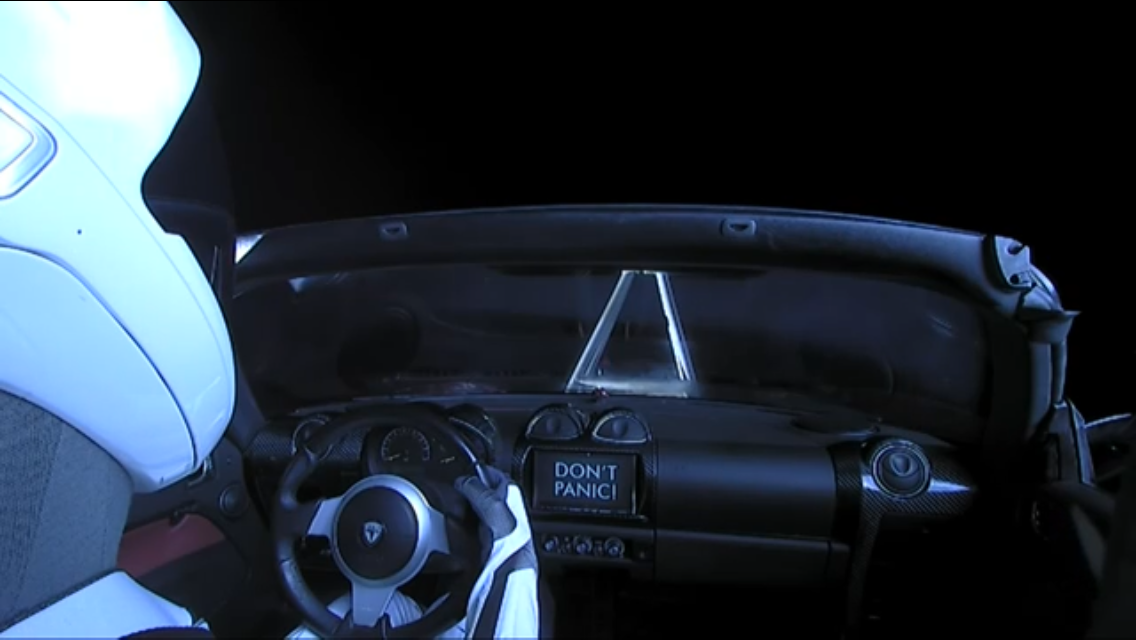 It’s clear Musk is a fan of the Hitchhikers Guide to the Galaxy; there’s a nice onboard reference to the words on the screen of the Hitchhikers guide (Douglas Adams basically predicted the iPad) on the car’s dashboard navigation system. One of the reasons I love that five-book trilogy is that it gives you a picture of an infinitely large universe, and a sense of the scale of an infinite timeline, and then leaves you with absurdity as the only way to cope with this vastness and our relative insignificance. The universe is infinitely big, and we occupy a tiny speck of it. Time is infinitely long, and our existence is a flash in the pan… which means we’re all so small — so what better way to mark one’s smallness than to fling a spacecraft into space as an almost eternal testimony to your name — especially a space craft with an inherent absurdity to it. We can’t take things too seriously if this four score years and ten on this mortal coil is all we have — and, if you want to make the best of this absurdity then absolutely the most virtuous thing you can do while not taking yourself too seriously is expand our shared human horizons.

Musk, of course, doesn’t totally buy into the idea that the universe is infinitely big and time infinitely long — his metaphysics have been reasonably well documented, and to be honest, they’re an equally absurd platform from which to launch Starman — but perhaps go some way to explaining why he lives his life in the pursuit of technological advancement; he’s playing his bit in the great cosmic computer program of life. Musk buys into something like the theory put forward by the Matrix (just without the battery part). He believes the world as we know it is part of a computer program put together either by an advanced human race from the future or some other intergalactic species all together.

“So given that we’re clearly on a trajectory to have games that are indistinguishable from reality, and those games could be played on any set-top box or on a PC or whatever, and there would probably be billions of such computers or set-top boxes, it would seem to follow that the odds that we’re in base reality is one in billions.”

Just wrap your head around that idea for a minute. The probability that we are in the real universe, ‘base reality’, according to Musk is infintesimally small, we’re even less significant at that point than we would be if we just had to grapple with the reality of living for 100 years in a universe that is already billions of years old, while occupying a square metre of a rapidly expanding universe stretching out towards the infinite.

No wonder the guy is pouring his energy into sending an avatar into space for an eternal journey; his are the (virtual) hands that sent (virtual) man into space. If life is a computer game; he’s winning.

One of my favourite parts of the Hitchhiker’s Guide series is a scene with a device called the Total Perspective Vortex. You jump into a box and suddenly are confronted with your place in the universe — the grand scale of everything when compared to your nothingness — it shows you “the whole infinite Universe. The infinite suns, the infinite distances between them, and yourself an invisible dot on an invisible dot, infinitely small.”  I’ve written about this before back when philosopher Alain De Botton was suggesting the best thing to orient us for an ethical life would be to see images of space beamed back from space telescopes (to teach us how big reality is), and perhaps a temple to perspective should be built as a quasi-religious space for atheists… the thing about this Total Perspective Vortex is that it utterly destroys every human who enters it — the only way it leaves people (one person in particular) with any sense of self beyond the experience is if the machine gets rigged so that it makes you the centre of everything; the only way to survive is to essentially build a religious mythos around a person… or yourself, or to take the advice of the Hitchhiker’s Guide and ‘Don’t Panic’… It’s like Musk is oscillating between the two, he’s part ‘messiah’, building a new world with (genuinely incredible) technology and a bit of imagination, and part model ‘Don’t Panicker’… sending disco balls and electric cars into space.

But why bother? If you’re just a dot not just in the universe, but a few bytes in some future computer game, why play?

If that’s all there is to life, why should any of us get out of bed? Starman is capable of giving us a pretty great view of the cosmos. But is it a real view or just a virtual one? And if we are in ‘base reality’ — exactly how much can Starman show us that helps us live lives of significance? Should we even want that?

At times it’s hard for me to rationalise my religious beliefs and to see them as any more plausible than Musk’s computer simulation theory. Musk is a genius. A world-changing mind. And he believes that, is it really more plausible to believe that there are billions of realities in computer games (not to mention base reality) — infinite realities — than it is to believe in one reality and an infinite God?

I don’t think so. And I know which vision of the truth feels more compelling.

I certainly feel as though I’m real (and imagine it’d be hard to generate that in a machine reality)… but one thing Christianity gives you that Musk doesn’t is a place in the universe and a sense of significance. It says that the ‘Starman’ is the one who flung the stars into space; creating this infinite reality in a word who can ‘fold the universe up like a blanket’ — and then it says those same hands were blasted by rudimentary metal spikes, affixed to splintery timber on a crude execution device designed to humiliate, to render one totally insignificant, and that this happened because despite being small and fleeting, human lives matter to the one who created this universe; that the seemingly infinite space-time reality runs second to the infinite divine life, and that not only was that life laid down for us in the ‘Starman’, Jesus, but in his resurrection we are invited to become eternal, because of the deep, life-giving, love of the Father.

The Bible makes these grand claims about Jesus and his relationship to the universe.

“The Son is the radiance of God’s glory and the exact representation of his being, sustaining all things by his powerful word.” — Hebrews 1:3

Radiance. Starlike. But also ‘sustaining all things’ — including the stars, by his word.

Musk’s Starman will be eternally sitting in space, in fact, there’s never been a time where the mannequin wasn’t ‘sitting’ — Hebrews tells us that the real Starman ‘sits in the heavens’ too…

“After he had provided purification for sins, he sat down at the right hand of the Majesty in heaven.” — Hebrews 1:3

But that one day the real Starman will stand up. And then:

“In the beginning, Lord, you laid the foundations of the earth,
and the heavens are the work of your hands.
They will perish, but you remain;
they will all wear out like a garment.
You will roll them up like a robe;
like a garment they will be changed.
But you remain the same,
and your years will never end.” — Hebrews 1:10-12

Those are some hands — the hands that were nailed to wood in humiliation will ‘roll up’ the heavens — the universe — like a robe; because the Lord — Jesus — as a person of the triune God — is infinite and unchanging, from the beginning of the universe, to its end and beyond.

That’s the sort of view of the world that creates something more than absurdity — and gives us the chance to have a part in a legacy that will last a long time beyond Musk’s Starman. Every person who turns to Jesus will outlive that electric spacejunk. The picture the writer of that book ‘Hebrews’ then paints is a picture of us not just being slightly significant to this Starman, but brothers and sisters, adopted into the family to share the inheritance. This gives us something better than absurdity and makes us something more significant than bits and bytes — and true or not (and I believe it is), it is certainly a more emotionally satisfying, less destructive, picture of life and our place in space-time. Here’s the vision Hebrews gives for our place in the galaxy:

“What is mankind that you are mindful of them,
a son of man that you care for him?
You made them a little lower than the angels;
you crowned them with glory and honor
and put everything under their feet.”

In putting everything under them, God left nothing that is not subject to them. Yet at present we do not see everything subject to them. But we do see Jesus, who was made lower than the angels for a little while, now crowned with glory and honour because he suffered death, so that by the grace of God he might taste death for everyone.

In bringing many sons and daughters to glory, it was fitting that God, for whom and through whom everything exists, should make the pioneer of their salvation perfect through what he suffered. Both the one who makes people holy and those who are made holy are of the same family. So Jesus is not ashamed to call them brothers and sisters — Hebrews 2:6-11