Sounds fun. Just like the real Farmville. It’s called “MyFarm” – partly because instead of sticking a 2.0 after your name these days you remove the space and capitalise both words. Then you are WebSavvy.

“MyFarm is a big online experiment in farming and food production, giving 10,000 members of the public a say in the running of a real working farm. The farm is on Wimpole Estate, near Royston in Cambridgeshire.

The MyFarm Farmers will join forces on this website to discuss and make decisions on every aspect of the farm: the crops we grow, the breeds of animal we stock, the new facilities we invest in and the machinery we use.

The aim of the farm is to be profitable, and to maintain the highest standards of sustainability and welfare.”

Seriously though. Pay me $25 and I’ll ring my father-in-law with whatever suggestion you have for crops for him to grow in the Darling Downs, Queensland… you’ll probably end up with no more clout than you would going through this program, plus it’ll cost you less money.

With a particularly apt title. 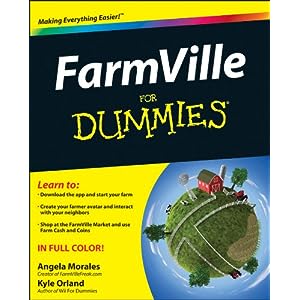 It actually exists. On Amazon.

Farmville is boring. I’m proud I gave it up (remind yourself why). If you’re one of the 75 million people who regularly play Farmville – here’s a description of what you’re actually doing (from a broader exploration of why you, and your ilk, are doing it too).

Farmville is not a good game. While Caillois [an author of a book on gaming] tells us that games offer a break from responsibility and routine, Farmville is defined by responsibility and routine. Users advance through the game by harvesting crops at scheduled intervals; if you plant a field of pumpkins at noon, for example, you must return to harvest at eight o’clock that evening or risk losing the crop. Each pumpkin costs thirty coins and occupies one square of your farm, so if you own a fourteen by fourteen farm a field of pumpkins costs nearly six thousand coins to plant. Planting requires the user to click on each square three times: once to harvest the previous crop, once to re-plow the square of land, and once to plant the new seeds. This means that a fourteen by fourteen plot of land—which is relatively small for Farmville—takes almost six hundred mouse-clicks to farm, and obligates you to return in a few hours to do it again. This doesn’t sound like much fun, Mr. Caillois. Why would anyone do this?

Here’s the rub. This is why you keep feeling compelled to play a stupid game. It’s social psychology.

“The secret to Farmville’s popularity is neither gameplay nor aesthetics. Farmville is popular because in entangles users in a web of social obligations. When users log into Facebook, they are reminded that their neighbors have sent them gifts, posted bonuses on their walls, and helped with each others’ farms. In turn, they are obligated to return the courtesies. As the French sociologist Marcel Mauss tells us, gifts are never free: they bind the giver and receiver in a loop of reciprocity. “

Read the essay. It just might change your life.

Sick and tired of FarmVille clogging up your newsfeed on Facebook? Respond in kind with FarmVillain. 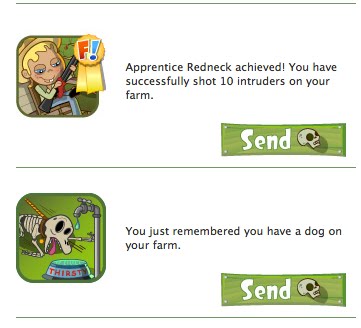 I used to play Farmville. Then I let my crops die and neglected my animals. Because the game is a black hole of time wasting boringness. This ad just about sums it all up.

I’ve spent a fair bit of time playing Farmville on Facebook. I recently overcame my addiction.

This picture, from some other Farmviller named Jeff, is almost enough to lure me back…