I love public speaking. I’m not one of those people who gets filled with dread standing up in front of a crowd. In fact, the bigger the crowd the better. I guess at that point I’m classically extroverted. It’s a rush. Preaching is the thing that excites me most about vocational ministry. It’s not that I think I’m good at it. I’m not. I’m not bad – this isn’t an exercise in false modesty. You’d hope with a journalism degree I’d be ok at stringing some words together. But there are a few things I struggle with. But this isn’t a post about today’s sermon.1

I’m wondering about the long term effects of the adrenalin rush I get every time I preach. I love it. For me it’s like sky diving or extreme sports. The act of getting up in front of people – regardless of what I’m actually saying. I love MCing stuff as well.

Will I get addicted to it? Is that why preachers sometimes travel the globe preaching? Does this pose long term risks to my health? Most importantly, I’m wondering how sustainable my Sunday afternoons are going to be with the post adrenalin crash. Man. What goes up sure comes down. By about 2pm I can hardly keep my eyes open. I go blank. All that energy that I gain in the morning as I get ready to preach (I reckon the adrenalin kicks in at about 8am when I’m preaching at a 9:30 service) drains out, and takes whatever reserves I have with it. I’m pretty sure the adrenalin is what gives other people preacher’s belly – though for some it’s doubtless channelled as fear rather than exuberance.

I’d love to know how others go on the adrenalin front – is the Sunday arvo crash a common thing? Not having a night service anymore seems like such a good innovation on the days I’ve preached in the morning.

1Today’s sermon was mostly good. The last little application bit felt a little tacked on, and I really wasn’t sure where to go once I’d established that I didn’t think the passage was about sexual ethics, but rather about seeking God’s kingdom. So I said that. I talked about commitment. I tied it to Jesus (which was easy because of Matthew’s genealogy). I compared the righteousness of Tamar with the unrighteousness of Judah. But blah. Blah. Blah. That’s how I felt about the last fifth of my talk.

My other little bit of self critique (and I’ll post the audio for this sermon when I get it) is that I’m much more engaging (in my opinion) when I’m illustrating and telling a story entirely in my own words, as I would naturally. And in most of these cases I leave the script behind. At times I feel like I suppress my personality a little in the writing of my talks and I end up cold and robotic rather than talking how I would normally talk. Actually, I don’t sound robotic, I sound like a journalist, not a real person. On the plus side, all the old ladies tell me I speak clearly and audibly. I don’t write an essay – I try to write the way I talk, but I suspect I haven’t beaten out the writing for TV part of my previos training. There’s something just not quite right. It’s like I’m preaching in black and white rather than colour too. For the most part. Or at least that’s how I feel. Feel free to chime in if you heard me this morning (or once you’ve listened to the audio).

On Onan the Barbarian.

Here’s a wordle. See if you can figure out what my big idea is. 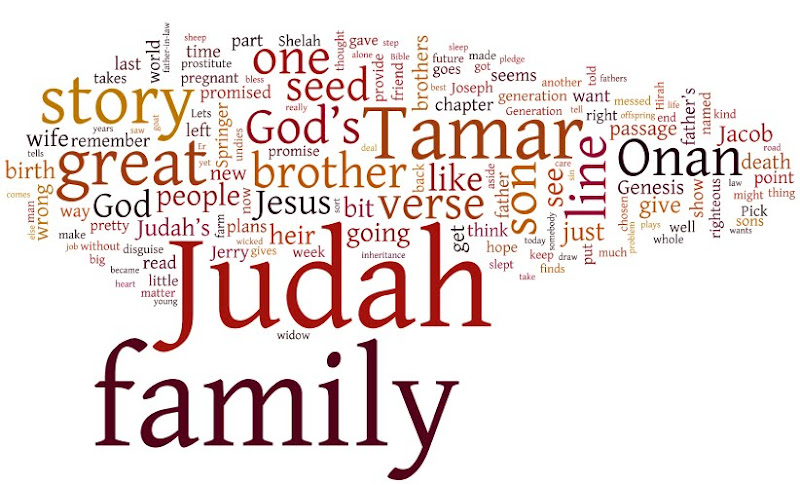