The New York Times has an infographic today exploring the impact of the GFC on different age groups and demographics in America. It’s pretty fascinating. But it probably doesn’t directly translate to employment in Australia.

Men in America are sitting at an unemployment rate of 9.0% across all demographics, while women are at 7.3%.

I assume this looks at people who want to be in work and aren’t though. Which is the traditional measure of unemployment – despite what some stupid government departments might suggest. Yeah, I’m looking straight at the ones who take the total workforce and subtract it from the total population…

If it did I’d be fairing well – as would people like me – with only 3.9% of white, 25 year old (and over) males with university degrees looking for work. 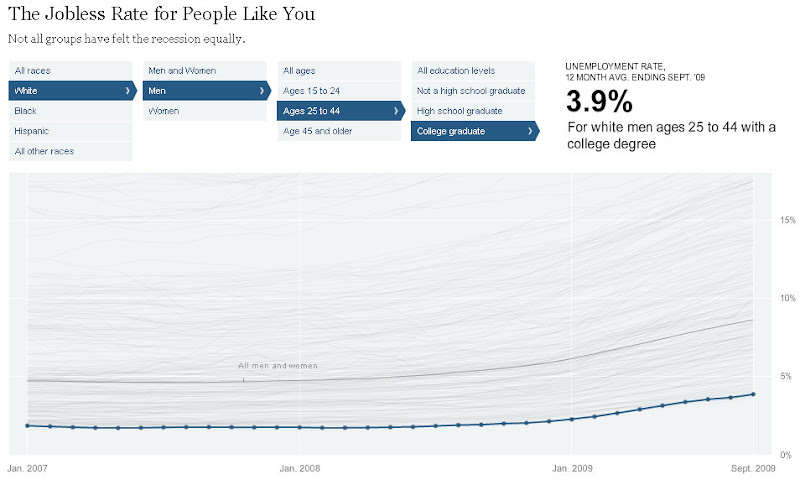 Find out how you score here.

There’s been a bit of online chatter about the impact that the financial crisis is going to have on churches – the Sydney Anglican Diocese is perhaps going to wear the consequences more than anywhere else – which is sad, given that they train and resource most evangelical ministries in Australia in some capacity.*

“THE world’s richest and largest Anglican diocese has lost more than $100 million on the sharemarket and is investigating ways to cut programs and ministries across Sydney.”

According to the SMH the losses have been compounded by the fact they borrowed to invest.

“The Anglican Archbishop of Sydney, Peter Jensen, has written to clergy warning that the global financial crisis has caused significant losses. He said the diocese had borrowed money to invest and used the profits to build churches in 2007.”

In hindsight it’s easy to throw stones at that strategy – but is this ever “good stewardship” – the SMH headline makes accusations of “gambling” – which would seem inconsistent with their approach to investment in the business section.

Economic times are tough. There are people hurting. Here’s a hanky that will help you empathise as you comfort those around you… it tracks the movement of the Dow Jones index over the past five years.

It’ll cost you an exorbitant $US28 – and comes from Design Glut – who says you can’t make money off the recession.