I confess, yesterday, while sitting in Greek and waiting to hear which way the independents would swing (in favour of democracy or broadband flavoured pork) I was relying on Twitter. Mainstream media is great for fact checking and objectivity – Twitter carries the can for immediacy (you don’t have to have your stuff approved by an editor). Because most of Australia was glued to live coverage anyway the pressure for news sites to post the info first was pretty low. So 1 point for Twitter.

By my count twitter is up 2 points currently – because they boast another scoop on mainstream media – the stream of consciousness rants and thoughts of one K-West. They’re needlessly and pointlessly interesting. In the last couple of days he posted a stream of stream of consciousness (a river of consciousness perhaps) thoughts that cobbled together (let Gizmodo do it for you) amount to a lengthy apology to Taylor Swift for last year’s Grammy interruption, and an apology to his fans who had to leap to his defence as a result.

“The media has successfully diminished the “receptive” audience of KANYE WEST. Taking a 15 second blip, the media have successfully painted the image of the ANGRY BLACK MAN, The King Kong theory. I’m the guy who at one point could perform the Justin Timberlake on stage and everyone would be sooo happy that I was there.

People tweeted that they wish I was dead… No listen. They wanted me to die, people. I carry that. I smile and take pictures through that. I wear my scars. It’s almost like I have to where a suit to juxtapose my image and I won’t lie: IT WORKS!

I wrote a song for Taylor Swift that’s so beautiful, and I want her to have it. If she won’t take it then I’ll perform it for her. She had nothing to do with my issues with award shows. She had no idea what hit her. She’s just a li’l girl with dreams like the rest of us. She deserves the apology more than anyone.”

You might remember Tea Party Jesus, words from members of the new “conservative force” in American politics in speech bubbles on pictures of Jesus. Well, Jesus Needs New PR has gone one better. Kanye West Jesus.

Further proof, if required, that Kanye is not the messiah, just a very naughty boy with a palpable messianic complex.

The Oatmeal has a little cartoon featuring ten things not to Twitter about. There, in cartoon glory, is a reminder about oversharing. Don’t do it people. 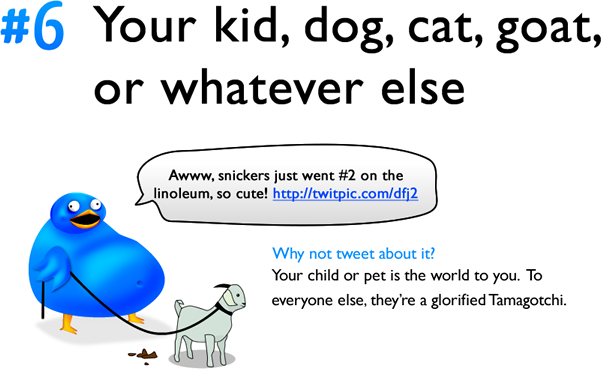 It’s a good list. Familiarise yourself with it. Submit to its authority.