My ongoing investigation into milk prices continues. My research reveals a shocking fact. Milk costs about the same to produce per litre as petrol – and yet we still pay significantly more at the Servo.

To begin my research on the matter I first contacted Ben, my economics consultant, who said the following:

“It probably costs more to produce/transport (I’m no milkologist, so i don’t know about this for sure), at any particular time there is only a certain supply of milk, so it is open to general market forces, you demand less milk than petrol, so the marginal utility you gain at 1 litre of milk is vastly lower than that of petrol.

Really, they are totally different items. People who think that comparing the price of milk to petrol will reveal some holy grail of pricing failure are retards.”

If scarcity is a factor though surely the ease in which milk can be created as opposed to fuel should make the supply side of the equation the larger side and lower the price – also the fact that milk has a much shorter shelf life should keep the price low because retailers can’t afford to hang on to it? Shouldn’t it? Milk is expensive – it’s about $2 a litre if you buy it from a servo – and around $1.25 from a Supermarket – it can’t cost that much to produce – all you need is a cow and some grass – I assume too, that a cow, being an appreciating asset (as long as it’s getting fatter) has a net cost of zero to the farmer.

It can’t possibly cost more to squeeze a cow’s nipple than to extract crude oil from the ground and refine it into petrol. Isn’t part of the deal with oil pricing that there’s a central pricing body who make the call based on available supply, future supply and market conditions? Surely milk has an almost infinite future supply and ample current supply, and pretty consistent, steady demand. Unless there’s a sudden spike in demand for milk products like ice cream and milkshakes… There shouldn’t be any inefficiencies in its production created by fluctuations in the market and it shouldn’t cost more than petrol.

Its carbon footprint is an issue because Cows produce methane so I guess emissions trading will also impact on milk pricing.

Ben says I have it all wrong:

“Cows apparently cost a lot to upkeep. Cows also are relatively labour intensive per litre. Milk requires handling up to health and saftety standards, specific packaging, refrigeration. sure, pumping oil out of the ground is expensive, but they can pull out a million litres with only a few personnel and throw it in a ship and take it places. Sure it has to be refined, but i wouldn’t be surprised if fuel refinement is about on par costwise with milk refinement, if not cheaper.”

Not content to let my research die at a secondary source – I decided to pursue details from the primary producers. I found the following:

“Milk prices paid to farmers are determined on the basis of milkfat, protein and volume:

According to the current figures Milk farmers receive about 44c per litre of milk – and $5.80 per kilo of Milk solids (milk fat and protein). I’m not sure why the volume charge is subtracted… but that’s a separate issue. Milk it seems costs 44c per transaction in the initial purchasing stage. It must then be processed, bottled, and distributed to the retailer.

Milk prices, assuming you haven’t visited that link above, are set to rise this year due to the following factors:


“The Australian Bureau of Agriculture and Resource Economics (ABARE) expects that milk prices will continue to rise through to 2008-09 (Outlook Conference, 2007):

This UK site estimates average cost per litre of milk at about 13.7 pence per litre – that’s not taking into account the milk solid production.

Costs of production of milk are actually decreasing. And the average Tasmanian cow (which I assume is similar to the average Australian cow) produces 386kg of milk solids – and each cow produces about $1,488 worth of milk and milk solids while costing $1,196 to maintain (on a 250 cow farm).

So, that’s all quite long winded – but basically the farmer is selling the milk at 44c per litre – and being looked after in the process. The extra 80 cents (at least) is being added by the retailers and others. The government currently levies 11c per litre – but that’s all set to change. Good to see the Rudd Government doing something about this issue.

So these guys put the average price of production of a litre of fuel at 25-50c. Another UK site suggests the cost of producing fuel accounts for about 32% of the total cost per litre. The cost of production of a litre of milk accounts for about 35% of the total price based on the regular retail price of $1.25 per litre. So it’s Servos that sell milk for $2 a litre or more that are really jacking up the price – and for this they should be held accountable. The figures don’t lie. Milk is where the Service Stations are guilty of price gouging.

Unfortunately I promised Paul I’d only make interesting posts after he added me to his RSS reader. I lied. 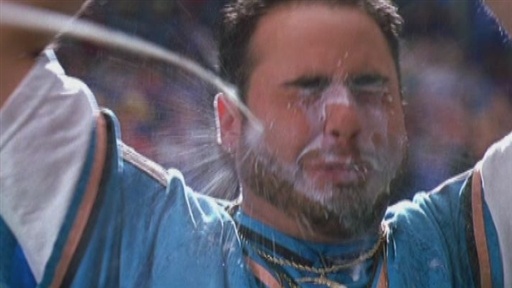 Why is it that milk costs more per litre than petrol? In my understanding it’s completely renewable. It’s not like we’re approaching “peak milk”, with ever dwindling supplies to satiate our growing thirst for our rampant consumer driven lifestyles… It’s a travesty I say.
And something must be done. There’s your cause of inflation right there – especially with fuel prices back down around the $1.10 per litre mark.