So. For those of you not following along with the discussion on yesterday’s post about worship… here’s an update.

I wrote that post with a healthy dose of irony. I thought. And I was aiming for humour, rather than offence, when adopting the persona of an “angry young man” essentially writing to a bunch of other “angry young people” and calling them old. I was trying to call out those people who were once advocators of change for being a bit stuck in the rut of that advocacy when things have changed. I also thought it was funny that the issue at hand dealt with music – which I thought was universally understood to be a marker of generational change…

And, in order to be noticed, I adopted hyperbole. I ironically wrote a reactive polemic against reactive polemics, calling for nuance. I thought that would be relatively clear.

But it turns out, once again, that the Internet isn’t very good for that sort of stuff. Even though I think that blogging is a medium different to other mediums (ie content is spur of the moment, geared towards the sensational, provocative, not completely thought out and referenced, opinionated, a contribution to discourse, etc), and think the reader has as much responsibility to consider the genre when responding as the writer does to consider the reader when writing… I think this post failed. People responded to the style, rather than the substance. And so, I edited it. You should read the post and join the discussion.

I am sorry that my post was not clear, and I’m sorry that it was possibly an offensive caricature of particular positions (again, ironically, because I would argue that almost all reactionary/polemic based stuff, especially on the internet, relies on caricatures and straw men).

Also, I am sorry if you’re 35 and I called you old, or if my post offended you in myriad other ways. But I guess my one response is – don’t let the offence get in the way of engaging with the issue, or be an excuse for dismissing the substance of the post or its criticism of your position.

Hey everybody, look over here, a new Oatmeal cartoon. This one is on irony. Here’s the number one use of irony: 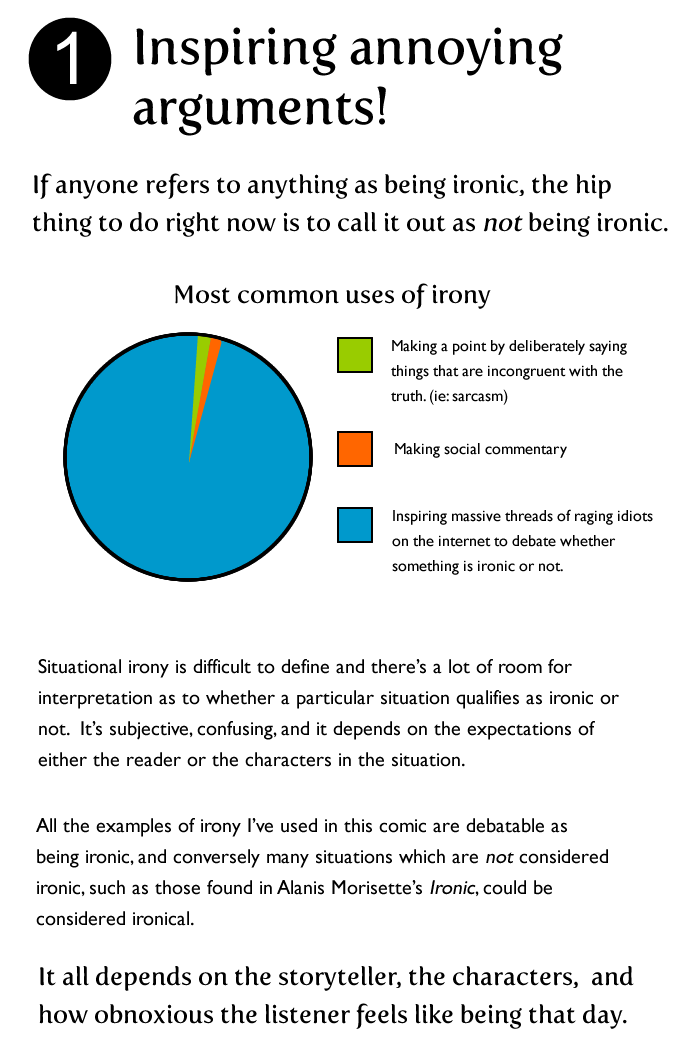 Their conclusion is that you shouldn’t debate irony – just like you shouldn’t be a grammar pedant – because chances are you understood what they meant and you’re just trying to look cool, informed, and right. And nobody really likes it when you do that.

Having dangerously used the word irony in a post today – and fearing the horde of angry pedants who swarm onto any use of the word irony they deem inappropriate – I made this graph on graphjam.

And in case you’re confused between sarcasm and verbal irony – because both have the same functional definition – here’s a helpful contrast.

Ridicule is an important aspect of sarcasm, but not verbal irony in general.

If you can’t get irony literarily right then at least you can get it literally right.

…or probably not. I suspect it’ll be the latest in a long line of exported Australian comedies to go over their heads thanks to an underdeveloped sense of humour. Still it will be interesting to see how many Americans think is Ja’mie actually a real person. Something the early Australian audience had trouble dealing with when “We Can Be Heroes” was released and “she” was interviewed on radio stations across the nation.

I’m not really fazed by the failure of the American audience to appreciate Kath and Kim – I didn’t like our version the first time round (or second, third or subsequent screenings for that matter). But Chris Lilley is a comic genius – so it would be a shame to see it not receive critical acclaim worldwide.

Anyway – this post was entirely based on the heading – and the fact that I suspect they won’t get it. I should stop writing posts purely on the basis of a pun laced heading.

Summer Heights High to screen in US

A little while ago someone suggested I write about the misuse of the word irony in the lexicon. Well I would, but ironically I don’t know anything about the topic (See that was funny on a couple of levels). I will point out my favourite example of this societal abuse of the word – Angst ridden Canadian Balladeerette (is that a female singer of ballads?) Alanis Morissette’s song ironic. The only irony in that song is that it doesn’t actually contain irony…

“A traffic jam when you’re already late
A no-smoking sign on your cigarette break
It’s like ten thousand spoons when all you need is a knife
It’s meeting the man of my dreams
And then meeting his beautiful wife
And isn’t it ironic… don’t you think?”

No Alanis I don’t think… and clearly neither did you. I’d suggest that’s more like poetic justice… as found in the correctly titled song Poetic Justice – written by Tom Kimmel and covered by Jane Saunders.

“I feel like the king when the queen loses faith
And the crowd rushes in to tear down the gate
While the whole palace slept, and I never rang the bell.
Maybe that’s poetic justice, but it’s pretty hard to tell.”

Actually – perhaps ironically that doesn’t sound like poetic justice to me – but perhaps that’s due to a lack of context. Ironically, again, Jane Saunders released an album called Poetic Justice – with the Tom Kimmel song as the title track. The song contains these lines:

So if her album is named after the song, and she sings the song, could she not be declaring something as hers that she stole from someone else… Guilty as charged I say.

So as you can see it’s almost impossible to learn anything ironic from a female song writer… or in fact from anyone at all. Except perhaps H.W Fowler who is quoted on Wikipedia (note: I understand the irony of claiming it’s hard to learn about irony from anyone and then turning to the source of all “reputable”* information**) as saying

“Irony is a form of utterance that postulates a double audience, consisting of one party that hearing shall hear and shall not understand, and another party that, when more is meant than meets the ear, is aware, both of that “more” and of the outsider’s incomprehension.”

So there you have it. An ironic insight*** into irony.

My iron beeps when it’s been left on for too long. Isn’t that a useful function. I discovered this while preparing to attend the races (of the equine variety) yesterday. Perhaps ironically*** (after my post last week) I did place a bet on a horse and it was quite literally pipped at the post. I bet $5 and lost – I figure the $5 goes a small way towards repaying Jupiters Casino for kindly inviting me into their corporate marquee for the day and feeding me seafood and cake. They would have provided me with free beer too (or heavier stuff) if I wasn’t feeling fluey and congested still. I had a day last week where I wasn’t feeling fluey and congested but then I got up at 4.55am to host the Today show breakfast people up here and the lack of sleep didn’t help my cause. (Look how I tied four pieces of information into the one paragraph – watch and learn people… For those at home wondering what the four pieces of information are: 1. My iron beeps, 2. I went to the races, ate at the corporate tent and placed a bet (all one topic (but three pieces of information I guess)), 3. I am sick, 4. I had the Today show up here last week). Wow. Are you awestruck yet? Probably not. I should point out that I’m actually not as arrogant as I sometimes sound…