The New York Times has banned its journalists from using the word “tweet” or any derivatives in their stories (possibly with the exception of describing the noise made by birds). Awesome. Instead they must use “wrote on Twitter” or “said on Twitter”… here’s an excerpt from the memo (via The Awl).

“Except for special effect, we try to avoid colloquialisms, neologisms and jargon. And “tweet” — as a noun or a verb, referring to messages on Twitter — is all three. Yet it has appeared 18 times in articles in the past month, in a range of sections.

Of course, new technology terms sprout and spread faster than ever. And we don’t want to seem paleolithic. But we favor established usage and ordinary words over the latest jargon or buzzwords.

One test is to ask yourself whether people outside of a target group regularly employ the terms in question. Many people use Twitter, but many don’t; my guess is that few in the latter group routinely refer to “tweets” or “tweeting.” Someday, “tweet” may be as common as “e-mail.” Or another service may elbow Twitter aside next year, and “tweet” may fade into oblivion. (Of course, it doesn’t help that the word itself seems so inherently silly.)”

Stuart doesn’t think paid ministers are anything special. I agree. Though “special” is as “special” does. Stuart commented on, and linked to, my post about raising non bitter ministry children. He didn’t like that I used the word “ministry” because we’re all meant to be ministers. Well, yes. But at that point it’s a matter of semantic differences, not theological. I don’t think you’ll find anybody linked to in Stuart’s post who disagrees with him on the fundamental point that those in paid ministry positions have a responsibility to be training and equipping the church to bring the gospel to those they are in relationship with.

What this all boils down to, and I’ve been looking forward to using this phrase here, is an illegitimate totality transfer.

Ministry might be the task of all Christians, but it is only the paid vocation for some. This is the problem with the Presbyterian church and the word worship – worship has a broad semantic range. It’s meaning is dynamic, though each meaning is linked an fundamentally the same. This is true too for the word “ministry” – it’s the best word we have to describe the role of Christians and the job for those we pay to work for the body. A payment that Paul encourages and even mandates (for all but himself).

English words have pretty wide ranges of meanings (I recommend reading Bill Bryson’s Mother Tongue for an exploration of just how English functions, and our church “jargon” (complete with Biblical terminology) is the same. Language is tricky to pin down, and pinning down one word with one specific (minority) definition makes for problematic discussions.

I’ve been reflecting lately on whether Paul’s ministry approach is normative – either for the Christian, or for the paid worker. I think it’s clearly not the case for either. Paul is an apostle, he’s single, he’s schooled in the law, he’s a Jew, he’s different to the other apostles (who have wives, and are paid). He calls the Corinthians to imitate him as he imitates Christ – but he doesn’t call them all to do ministry the way he does, he seems to see his own ministry as a special case. I certainly don’t think we should be expecting everybody within the church to minister in an apostolic fashion. We are (1 Peter 3:15) to be prepared to give an account for our hope, but we’re also a body of Christ with diverse roles and giftings, called to love and serve one another.

Stuart frames the purposes of his posts in the comments on the current one:

I have three pastoral concerns here:
1. for pastors, many of whom (at least anecdotally) struggle with overwork and consequent neglect of their wife and children;
2. for church members, who rely too much on paid pastors to do the ministry;
3. for the world, whom the church cannot bless if it is too reliant on paid pastors.

Worthy concerns, and I’m interested to see where Stuart goes while I try to build my own framework and philosophy for ministry (though it’s been pretty heavily influenced by those who came before me…).

I get the feeling that some of this helpful conversation gets bogged down in semantics – we spend so much time defining, or redefining, our terminology in order to engage with one another’s ideas. Izaac reflected on a conversation with one of his fellow students (who is part of the Joshua Tree church plant) mentioning similar issues:

One of our problems was that we were using the same words to describe very different things. When I said church it was not what Danny was thinking when he said church. I wanted to talk to Danny about his role as a student minister – but I prefaced the statement with “For lack of a better word…” and many other things like that.

This has highlighted for me part of the great thing that Stuart, Danny and others involved are trying to do. That is, groups such as these of which they are a part, which seek for radical rethinks of what we are doing, could easily define themselves by what they aren’t. Instead they are working hard to define what they are.

It’s a great conversation, but we need to make sure we aren’t (or are) at cross purposes on the basis of language.

This is simultaneously helpful and unhelpful. Given that we believe “I’ll pray for you” actually is a method for caring for people that particular critique is mostly unfounded (though “I’ll pray for you” with no offer of physical help does smack of hypocrisy).

What do you reckon? And are there other phrases we should reconsider? 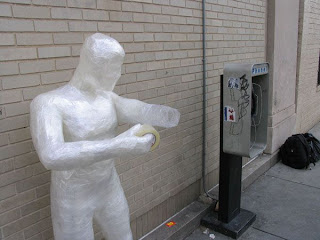 These are nice. Sculptures made of sticky tape (there are more). From Daily Vowel Movements (possibly the coolest surname based pun ever). That Andrew (one of the many who occasionally comments here) has just been writing a series on jargon which has been most interesting.