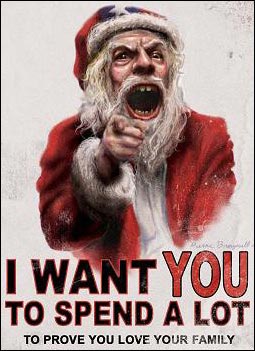 According to some Christian’s it’s no coincidence that Santa is an anagram of Satan. My wife doesn’t think fondly of St Nick. Who by all accounts was a lovely guy who anonymously and generously gave to the poor and downtrodden of his community.

There’s a long and passionate debate regarding the evils of Santa – and specifically the evils of teaching your kids about Santa. Is it a lie? Probably. But I’m not overly worried by it – if you’re going to tar all “fiction” with the same brush then go for it. Hate Santa, as much as you hate Harry Potter. Ironically, Harry Potter is probably considered evil by most people who hate Santa.

The other refrain as commonly heard as “Jingle Bells” at this time of year is that Christmas has been commercialised. That commercialisation is evil. That modern Christmas has been stripped of its meaning. Well yes. Christmas is commercial. That’s no reason not to support it. Particularly this year. Christmas means jobs. We’re facing the “economic downturn” since the great depression. Jobs are good. Spending money is good. Do it wisely.

I wonder sometimes if our spirit of Christmas protectionism – it’s our holiday and you guys can only celebrate it if you remember our God – damages what could be a great PR opportunity for the church. People are generally thinking nice things about us Christians at this time of year – we get them a “holy day”, they sing carols that often contain the gospel message. And here’s the church, harping on about commercialisation.

Did you know that in Scotland Christmas was banned for almost 400 years – right up until the early 20th century. In fact – the good old Presbyterians were so keen on the ban, they made their signing of a treaty with England contingent on its introduction there.

Scottish Presbyterians, when called on for support by the Puritans of the English Parliament in 1644, did so on the understanding that their allies would in exchange impose the ban on Christmas. For over a decade traditional English Christmas festivities were prohibited

Really. A ban on Christmas. That’s a public relations disaster. Like the “war on Christmas” being waged throughout churches world wide now.

Christmas in Australia is big business. $37.2 billion worth of business. If you divide that by the average Australian wage – or an aggregated household average wage of $115,000 – that’s 328,000 households who keep their jobs because of Christmas (unless I’ve got my zeroes wrong in the billions bit of the calculation… it’s nine in Australia right?). In very poor economic modelling. Of course, retail workers earn less per hour than the “average wage” – which probably means more jobs rather than less… and because we import a lot of the stuff being bought and sold a lot of the money leaves the country, and trickle down economics is dead… anyway. Christmas means jobs. Christmas means food on the table for families this Christmas.

In a second set of calculations – Mastercard reckons the average Australian spent $800 on Christmas last year. That comes up with a figure about half that of the above methodology. 20 million people, multiplied by $800 is $16 billion, which works out to 320,000 jobs paid at $50,000 per year – nice round figures. Whichever way you look at it – Christmas means jobs.

Unemployment is set to surge. Be a good citizen. Celebrate Christmas in the spirit of St Nick – who gave generously and anonymously. And buy me something useless from here… oh wait, that’s a Japanese site. In a slightly related note – the CASE blog has an interesting post about “ethical shopping” that’s worth taking into account. It’s not that fair trade garbage that has taken over people’s sensibilities when it comes to coffee – it’s just biblical advice for shopping with a clean conscience.

For those of you unconvinced by my argument – or more convinced by this (satire warning) those of you who want your children to believe Santa is evil – here’s an evil Santa generator – if you put pictures of Evil Santa all round your house your child will thank you for it later – and be much less messed up than they would be were they to believe in Santa. What do I know anyway, I’m not a parent yet.