Marcionism, the heresy coined by Marcion, holds the dubious honour of being the first heresy identified as such by the church proper. Here’s Robyn’s guide to Marcionism: 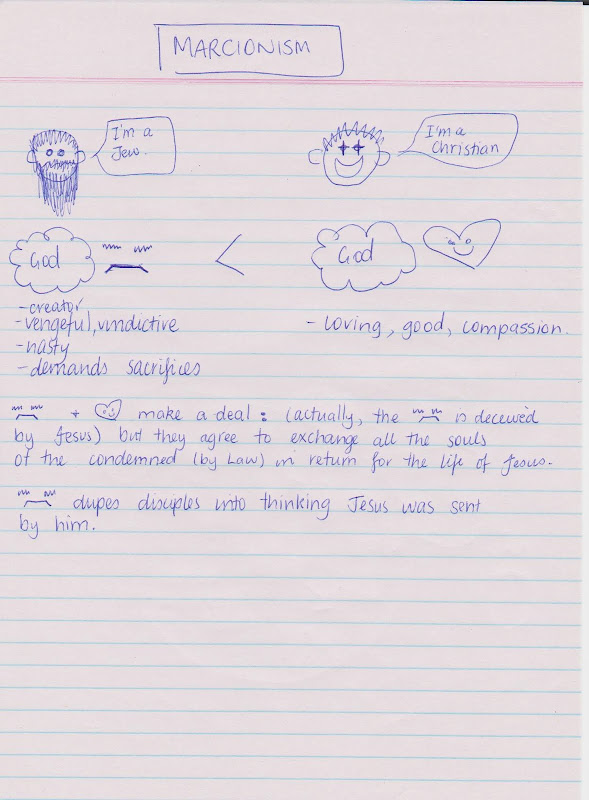 Marcion also tossed out the Jewish Scriptures and most of the New. He went with ten chapters of Luke (that he’d edited) and ten of Paul’s epistles.

Some people think Marcionism is similar to Gnosticisim. It really wasn’t. The Gnostics were all about their “secret knowledge” while Marcionism based knowledge on Marcion’s canon. Which prompted the creation of the actual canon.

Marcionisms view of Christ was “docetic” – it denied the humanity of Jesus (and thus denied the Demiurge’s role in the make up of Jesus (the Demiurge was what Marcion called the God of the Old Testament – who he thought existed, but was evil). The Gnostics believed in this Demiurge, but also believed that Jesus was fully human.

A guy named Robert Price reckons Marcion was the first to collect Paul’s epistles. This is because Robert Price is an idiot who thinks that Luke, Timothy and Onesimus are fictional characters. And doesn’t think most of the books of the New Testament were written until the second century (if that’s the case you’ve got to wonder why there’s no mention of the destruction of the Temple in AD 70. And why Acts ends where it does. And why John’s letters claim to be written by an eyewitness to Jesus ministry. Yeah. They must have been lying and ignoring some really compelling fulfillment of Jesus’ prophecy about the future of the temple, and forgetting that first century philosophical biographies (which Luke-Acts appears to be similar in genre to) normally ended with, or recounted, the death of the person they were writing about.