Polycarp was featured earlier in the Trading Cards series. He was an early church father said to have been a disciple of the Apostle John. He lived to a ripe old age, and then was famously martyred having been a Christian for 86 years in a very public setting, with tremendous courage and dignity and as a faithful witness to the end. We know about his martyrdom because of this document – an account sent out by the church of Smyrna to another church, to be passed on to churches around the world. While some of the account may well be historiographical, and even if some of the miracles did not happened, the document provides an insight into the persecution the early church suffered at the hands of Rome, and the way they sought to encourage one another (essentially through the spread of this sort of propaganda (note: not all propaganda is bad)). The letter strongly associates Polycarp’s martyrdom with Christ’s. And paints martyrdom as a desirable thing for the church. 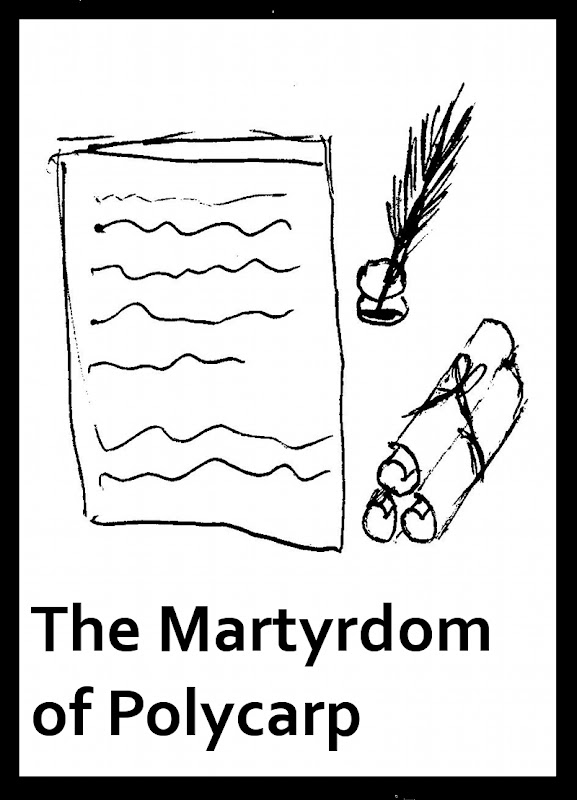 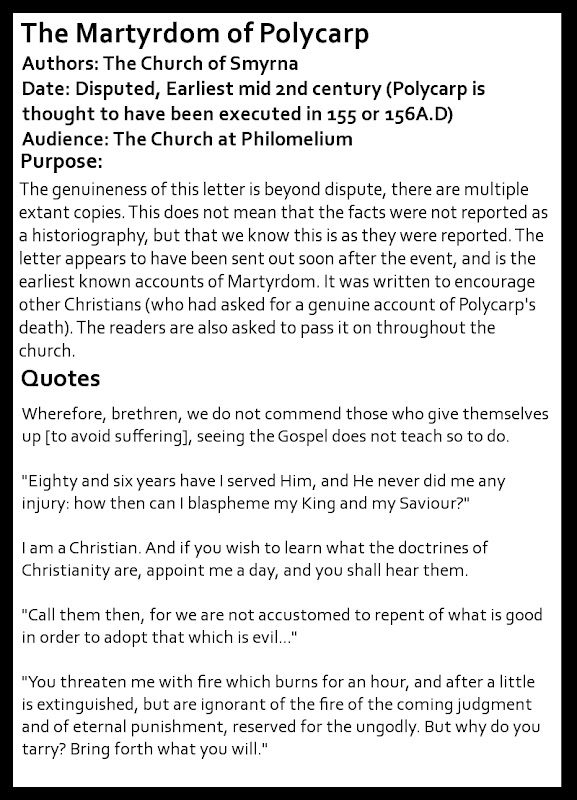 It contains this little gem of a story about Germanicus, another martyr, who having fought off the beasts being used for his execution for a while, made them attack him instead of renouncing Christ:

“Germanicus strengthened the timidity of others by his own patience, and fought heroically with the wild beasts. For, when the proconsul sought to persuade him, and urged him to take pity upon his age, he attracted the wild beast towards himself, and provoked it, being desirous to escape all the more quickly from an unrighteous and impious world.”

This spectacle caused the crowd present to shout for the Romans to find Polycarp, perhaps clamouring to see another old Christian die with such dignity. The letter also tells the story of a guy named Quintus who turned away from Christ to save his own life:

“Wherefore, brethren, we do not commend those who give themselves up [to escape suffering], seeing the Gospel does not teach so to do.”

Polycarp hears that people are after him – and he was just going to hang out in the city going about his business, but his friends persuaded him to head to the hills. Which he did. But then a servant gave him up (betrayed just like Jesus). And he was caught, and brought to trial. When the horde of armed soldiers caught him (again, lots of armed soldiers, just like the arrest of Jesus) he fed them, and asked for some time to pray. After he had prayed (and the account says his attitude convicted some of the soldiers that they were doing the wrong thing).

“So when he heard that they had come, he went down and spoke with them. And as those that were present marvelled at his age and constancy, some of them said. “Was so much effort made to capture such a venerable man?” Immediately then, in that very hour, he ordered that something to eat and drink should be set before them, as much indeed as they cared for, while he besought them to allow him an hour to pray without disturbance. And on their giving him leave, he stood and prayed, being full of the grace of God, so that he could not cease for two full hours, to the astonishment of those who heard him, insomuch that many began to repent that they had come forth against so godly and venerable an old man.”

He’s mistreated by the Romans on his way to trial (just like Jesus):

“And the Irenarch Herod, accompanied by his father Nicetes (both riding in a chariot ), met him, and taking him up into the chariot, they seated themselves beside him, and endeavoured to persuade him, saying, “What harm is there in saying, Lord Cæsar, and in sacrificing, with the other ceremonies observed on such occasions, and so make sure of safety?” But he at first gave them no answer; and when they continued to urge him, he said, “I shall not do as you advise me.” So they, having no hope of persuading him, began to speak bitter words unto him, and cast him with violence out of the chariot”

“And when he came near, the proconsul asked him whether he was Polycarp. On his confessing that he was, [the proconsul] sought to persuade him to deny [Christ], saying, “Have respect to your old age,” and other similar things, according to their custom, [such as], “Swear by the fortune of Cæsar; repent, and say, Away with the Atheists.” But Polycarp, gazing with a stern countenance on all the multitude of the wicked heathen then in the stadium, and waving his hand towards them, while with groans he looked up to heaven, said, “Away with the Atheists.” Then, the proconsul urging him, and saying, “Swear, and I will set you at liberty, reproach Christ;” Polycarp declared, “Eighty and six years have I served Him, and He never did me any injury: how then can I blaspheme my King and my Saviour?””

His approach to his trial, and those trying him, is quite Pauline (he tries to convert the governor).

And when the proconsul yet again pressed him, and said, “Swear by the fortune of Cæsar,” he answered,

Since you are vainly urgent that, as you say, I should swear by the fortune of Cæsar, and pretend not to know who and what I am, hear me declare with boldness, I am a Christian. And if you wish to learn what the doctrines of Christianity are, appoint me a day, and you shall hear them.

The proconsul replied, “Persuade the people.” But Polycarp said,

To you I have thought it right to offer an account [of my faith]; for we are taught to give all due honour (which entails no injury upon ourselves) to the powers and authorities which are ordained of God. Romans 13:1-7; Titus 3:1 But as for these, I do not deem them worthy of receiving any account from me.

His response to the Proconsul’s threats are fantastic.

“The proconsul then said to him, “I have wild beasts at hand; to these will I cast you, unless you repent.”

“Call them then, for we are not accustomed to repent of what is good in order to adopt that which is evil; and it is well for me to be changed from what is evil to what is righteous.”

But again the proconsul said to him, “I will cause you to be consumed by fire, seeing you despise the wild beasts, if you will not repent.”

“You threaten me with fire which burns for an hour, and after a little is extinguished, but are ignorant of the fire of the coming judgment and of eternal punishment, reserved for the ungodly. But why do you tarry? Bring forth what you will.”

After hearing his testimony the mob in the stadium call for Polycarp, the father of Christians and the teacher of the province of Asia who taught people not to worship the Roman gods, to be fed to the lions. The governor says the animal shows are finished for the day, but he lets them burn Polycarp to death instead. A task they tackle with relish and gusto. Polycarp complies, the soldiers are going to nail him in place, and he tells them that will be unnecessary:

“Leave me as I am; for He that gives me strength to endure the fire, will also enable me, without your securing me by nails, to remain without moving in the pile.”

” O Lord God Almighty, the Father of your beloved and blessed Son Jesus Christ, by whom we have received the knowledge of You, the God of angels and powers, and of every creature, and of the whole race of the righteous who live before you, I give You thanks that You have counted me, worthy of this day and this hour, that I should have a part in the number of Your martyrs, in the cup of your Christ, to the resurrection of eternal life, both of soul and body, through the incorruption [imparted] by the Holy Ghost. Among whom may I be accepted this day before You as a fat and acceptable sacrifice, according as You, the ever-truthful God, have foreordained, have revealed beforehand to me, and now have fulfilled. Wherefore also I praise You for all things, I bless You, I glorify You, along with the everlasting and heavenly Jesus Christ, Your beloved Son, with whom, to You, and the Holy Ghost, be glory both now and to all coming ages. Amen. “

The fire is said not to have had any effect on Polycarp:

“And he appeared within not like flesh which is burnt, but as bread that is baked, or as gold and silver glowing in a furnace. Moreover, we perceived such a sweet odour [coming from the pile], as if frankincense or some such precious spices had been smoking there.”

And they have to stab him instead, at which point his blood spurts out in the shape of a dove and puts out the flames (or so it is reported). The biography contains a few pieces of anti-Jewish sentiment, including blaming the Jews for preventing the church from receiving Polycarp’s body “lest they start worshipping him instead of Christ” – which the writers say is not possible for the Christian to do.

The Romans, not seeking to make the mistake of letting Polycarp come back to life, instead put his body in the fire, where it burns, and the Christians collect his bones and bury them in a fitting place where they can gather together to celebrate the anniversary of the event and rejoice over Polycarp’s life.

The letter says Polycarp was the 12th martyr in Smyrna. And that it has been sent around the churches in order to encourage them to glorify the Lord.

“Since, then, you requested that we would at large make you acquainted with what really took place, we have for the present sent you this summary account through our brother Marcus. When, therefore, you have yourselves read this Epistle, be pleased to send it to the brethren at a greater distance, that they also may glorify the Lord, who makes such choice of His own servants. To Him who is able to bring us all by His grace and goodness into his everlasting kingdom, through His only-begotten Son Jesus Christ, to Him be glory, and honour, and power, and majesty, for ever. Amen. Salute all the saints. They that are with us salute you, and Evarestus, who wrote this Epistle, with all his house.”

There’s an online version of the document here.