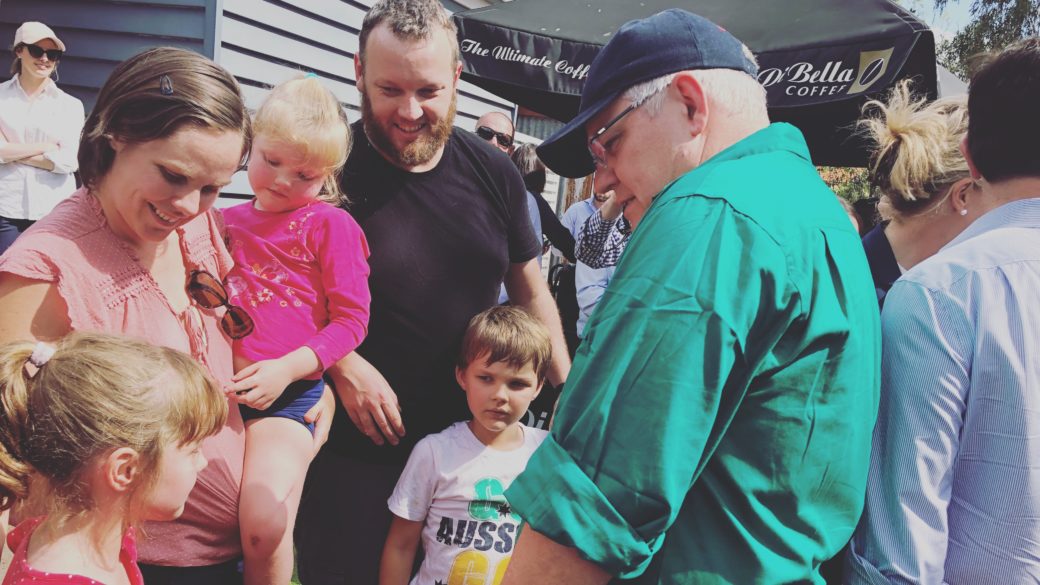 Re: The Medevac Bill and our ongoing politicisation of asylum seekers

Mr Prime Minister, I recently had the pleasure of meeting you in Dalby, and introducing you to my kids; a photo opp not all of them appreciated at the time, but that provided significant opportunities for us as a family to talk about civic service and politics and the strange calling and vocation you find yourself in. I was thrilled for the opportunity to explain to them that you can be in politics, and be a Christian (I’m a Presbyterian minister as well as a father… which isn’t to say we’re political as Presbyterians, but rather that I want my kids to see how faith and political action are intertwined).

I did explain that this is a particular hard calling especially the more senior your role in a party, but that we should pray for you and celebrate when Christians are able to bring a faithful presence into the “corridors of power” because the western world we live in has been profoundly shaped by Christians using the levers of government from soft hearts and convictions shaped by the Lord Jesus.

These leaders have often operated from convictions, whether on the right or left, that are both especially Christian in that they reflect a Christian belief that all human life is valuable because all people are made in the image of God, and they have been made by leaders whose character, convictions and relationships with people (and so politics) are shaped by having the mind of Christ. These are Christian politicians who have, because of their Christianity, been given to humble service sacrificing personal ambition for the sake of their neighbour (Philippians 2), and to practicing the commands of Jesus. Especially the commands to love God, and love our neighbour as we love ourselves (Matthew 22), to treat others as we would have them treat us, and even to love our enemies (Matthew 5). I urge you, as our Christian political leader, to rediscover and conserve these values that have helped shape the western world, as we in the west have been profoundly influenced by the teaching, example, and life-giving work of the Lord Jesus particularly as it applies to how our nation treats Asylum Seekers.

Seeing our enemies as human has had a profound impact on the western world (particularly as we practice war, and seek justice) as I’m sure you’re aware; but so too has seeing foreigners as neighbours. Jesus makes it particularly, explicitly, clear that to be a neighbour to someone is not to leave them in a ditch after criminals have taken advantage of them; it’s certainly not to leave someone with wounds unbound as a deterrent to future criminals. I am, of course, referring to the parable of the Good Samaritan, which Jesus tells when someone, looking for a loophole, asks “who is my neighbour” (Luke 10). The Good Samaritan, of course, is the model neighbour in the story. Jesus describes his actions as costly, humanising, love — seeing the humanity of the man in the ditch who was his ideological enemy. Here’s a picture of neighbourly love:

“But a Samaritan, as he traveled, came where the man was; and when he saw him, he took pity on him. He went to him and bandaged his wounds, pouring on oil and wine. Then he put the man on his own donkey, brought him to an inn and took care of him. The next day he took out two denarii and gave them to the innkeeper. ‘Look after him,’ he said, ‘and when I return, I will reimburse you for any extra expense you may have.’”

And here, Mr Prime Minister, is where I as a pastor, and father, and neighbour, am struggling to reconcile the picture of you meeting my kids and what I’ve told them about leadership and faithful presence, with what must surely be a demand placed on you by your Lord that is complicated to navigate in the context of the Australian policy landscape; a policy landscape on refugees and asylum seekers that you have helped create.

I’d urge you to read the theologian and political theorist James Davison Hunter, who coined the phrase “the culture war” and wrote about how a faithful Christian presence in the corridors of power might change the world, precisely because it has done so historically. One of the points he makes is that our western world tends to politicise everything; to view humans through the lens of political problems, which ends up dehumanising people for the sake of political outcomes. I believe our approach, as a nation, to the complex question of asylum seekers and refugees, including those who arrive by boat, has become so politicised that is has not just dehumanised those who should be our neighbours, but has also dehumanised us as we fail to act as neighbours. This is no longer conservative, but rather destructive to our humanity, and the values that have profoundly shaped the western world.

A dear friend of mine was involved in detention centre operations around the time our nation resolved to use off shore detention as a deterrent to prevent people smuggling. A policy that has existed for some time, and that has, according to reports and the trophy in your office, been instrumental in stopping the boats. Stopping the boats seems a noble and reasonable political goal, especially when paired with the way the story of the good samaritan has infected our national ethos through the faithful presence of many Christians such that we have a generous refugee settlement program (though I think many Christians, myself included, would love to help do more if we depoliticised the refugee problem and its solutions and allowed institutions like the church to be involved in the process more directly). People smugglers are no doubt like the thieves in the story of the Good Samaritan; those who are prepared to see their victims as less than human; who are prepared to take money from those reduced to something, in their imagination, like cattle in a live export ship rather than fully human neighbours. They leave these fellow humans in a ditch; our choice as a nation then is both how we respond to the existence of these thieves and how we bind up the wounds of those they abuse. It does not punish the thieves to leave their victims in a ditch; it certainly does not punish the thieves to leave their victims with wounds unbound, especially if we have the means and capacity to treat those wounds. The deterrent policy looks nothing like the neighbourly actions described in the parable of the good samaritan. It is a departure from the theological vision that shaped the western world; the one conservative governments like yours should seek to conserve in order to both live up to your name and conserve things of great value.

Jesus showed us what neighbourliness and kingship look like in the world that God made; in a world where people are valuable to God, by stepping in to a complex mess — the ditch, where criminals throw their victims — when he died on the cross. He did this as the archetypal version of neighbourly love; one where he became despised like a Samaritan, to not just rescue us from the ditch, but to be beaten, and flogged on our behalf so that we might walk free. He took not only the penalty for our sin — whether we were like the criminals or the victims — but he turned us from his enemies into his beloved neighbours. He saw humankind as human, and valuable. He did this to bind up the wounds of the broken and the oppressed. He did this in a way that profoundly changed and challenged the kingdoms of worldly power that produce violent robbers (and people smugglers). Christianity hollowed out the market for people smuggling in the Roman empire, and the slave trade both then and later in Europe, by reminding the smugglers that their cargo were human; perhaps we might try that approach by treating their victims as human rather than continuing to treat them like cattle? At the very least what virtue and the teaching and example of Christ require of us is to see those afflicted by criminals as our neighbours and so bind up their wounds as we can.

I note that in the same week our government repealed the Medevac laws, under your leadership, to continue our policy of deterrence, and keep the boats stopped, new details emerged about the violence of the Iranian government. I have many friends who fled to Australia, through people smugglers, from Iran. Many who have met neighbours here in our community who care for them; but many who fled and were wounded not just by their government, or by the smugglers, but by us — we aren’t, as a nation, just like the religious people who walk past the man in the ditch in Jesus’ story; we have become like the robbers in order to deter the robbers; our deterent model seems to be built on the idea that we are to be less appealing than both smugglers and the Iranian government.

How do I explain this to my children?

I’ll continue to teach my kids how wonderful it might be for them to love Jesus and serve people in our civic institutions; even if our oldest is only eight and most of this goes over their heads still (now about that education funding I mentioned in Dalby…). And I will continue to pray for you and the government you lead. You have a difficult task made more difficult, not less, by your faith in the crucified Lord Jesus; but Mr Prime Minister — Mr Chief Servant (for that is what minister means) — please lead us towards conserving the things that have made the western world great; an absolute commitment to the value and dignity of each human life. Lives so valuable to God that he entered the ditch to die for us, to bind up our wounds, heal, and restore us to life at great cost; because the cost of not being a neighbour, on our humanity and society, will always be greater than the price of neighbourliness, even if neighbourliness is very expensive indeed.