Give this a few seconds to get warmed up, and it’s the greatest thing you’ve ever seen, today, possibly.

Perhaps an analogy of what happens when old people try to do music for young people? A lesson for U2 to learn.

So. For those of you not following along with the discussion on yesterday’s post about worship… here’s an update.

I wrote that post with a healthy dose of irony. I thought. And I was aiming for humour, rather than offence, when adopting the persona of an “angry young man” essentially writing to a bunch of other “angry young people” and calling them old. I was trying to call out those people who were once advocators of change for being a bit stuck in the rut of that advocacy when things have changed. I also thought it was funny that the issue at hand dealt with music – which I thought was universally understood to be a marker of generational change…

And, in order to be noticed, I adopted hyperbole. I ironically wrote a reactive polemic against reactive polemics, calling for nuance. I thought that would be relatively clear.

But it turns out, once again, that the Internet isn’t very good for that sort of stuff. Even though I think that blogging is a medium different to other mediums (ie content is spur of the moment, geared towards the sensational, provocative, not completely thought out and referenced, opinionated, a contribution to discourse, etc), and think the reader has as much responsibility to consider the genre when responding as the writer does to consider the reader when writing… I think this post failed. People responded to the style, rather than the substance. And so, I edited it. You should read the post and join the discussion.

I am sorry that my post was not clear, and I’m sorry that it was possibly an offensive caricature of particular positions (again, ironically, because I would argue that almost all reactionary/polemic based stuff, especially on the internet, relies on caricatures and straw men).

Also, I am sorry if you’re 35 and I called you old, or if my post offended you in myriad other ways. But I guess my one response is – don’t let the offence get in the way of engaging with the issue, or be an excuse for dismissing the substance of the post or its criticism of your position.

Today’s comic, and the associated diatribe about the way old people handle stories about young people and technology made me laugh. The story it’s responding to is this one about a young guy who used an updated Facebook status as an alibi. You can’t get that from the comic…

But the associated editorial spells it all out…

But as that article goes on, it slides deep into “oh man OLD PEOPLE STEREOTYPES” territory. Joseph Pollini, who otherwise sounds awesome because he lists “hostage negotiation” as his primary area of expertise, says that teenage HACKERS could have posted that pancake-centric Facebook update to Rodney’s profile while posing as Rodney at his home computer, while Rodney was actually out busy robbing at the time – which, you know, is possible? But it’s not very likely, and it takes some knowledge. No problem, says Joseph! Teenagers are really good at internet, because “they use it all the time”. “They [teenagers!] could develop an alibi. They watch television, the movies, there is a multitude of reasons why someone of that age would have the knowledge to do a crime like that.”

ABC Radio up here in Townsville has an amusing weekly segment with a local lady in her twilight year (how do you say “old” in a politically correct manner?). Last night she was talking about kids and their fat thumbs that come from an insatiable desire to play the latest greatest games.

I think future children are going to be playing the games their fathers give them. The old old generation miss the point that the new old generation embrace technology the same way the new new generation do. Though I suppose there’s a difference between the way even my youngest sister approaches technology and the way I do.

Mark Driscoll, when he was in Australia, made a comment about faith – one generation wholly owns it, the next accepts (or assumes) it, and the next denies it. I think technology works in reverse.

Let us, for a moment, take a look at my family as a case study…

My dad was a classic early adopter. He was an electrical engineer which put him at the front of the curve when it came to developing computer technology. So far at the front of the curve that he wrote a book about one of the first computers. This, through a variety of circumstances detailed in that link, led to a lifetime of early adopting. His generation (and to be kind, the one before it) built the computer industry.

This in turn meant that I grew up experiencing a heap of new computer products and games. I think I wrote my first assignment using the Internet (CompuServe) in 1994. It was about Rwanda. It was, on reflection, possibly the best assignment I ever wrote (except maybe for the self help guide to writing self help books).  I like technology. I use technology. I find technology incredibly useful. I think, though this hasn’t really been tested, I could function without it.

My generation benefited greatly from the work of the generation previously – and many of us (not me) are now internet millionaires and billionaires because we missed the first dot com boom and caught the second. We are also a generation of hackers and pirates who believe technology should work for us, not us for it.

Meanwhile the next generation down couldn’t really live without it. Lets take little sister number three as an example. I suspect if I stole her mobile phones (that’s right, plural) she’d go into meltdown. She can correct me if I’m wrong.

Her generation have grown up immersed in technology – some of them have one mobile phone with a bunch of different SIM cards based on who they want to call on free deals. They have adopted a new, and very stupid language where words substitute numbers for letters and acronyms and initialisms flourish.

I’m friends with some of her friends on Facebook. And they’re all like “OMG, OMG!!! I’d totally die without my phone? I totes* need to update my Facebook Status with every meaningless thought” and “where’s my pancakes?”… though that’s sans punctuation including apostrophes. Because they don’t know how to use them.

Her generation, well, they write viruses that carry popular internet pranks onto the phone handsets of many of my generation’s geeks. Those people running around with unlocked iPhones.

I don’t know if there’s a point to this diatribe. Except perhaps to highlight how silly it sounds when any generation talks about the next generation without completely understanding where they’re coming from. People older than me didn’t grow up with computers – though they design the computers and the software that I like to play with… To bring in another topic altogether, this is like music. Young people think anyone about ten years older than them must be out of touch with their music and what’s cool – and yet they’re all listening (with the exception of Jonas Brothers fans) to music made by people ten years older than them.

I think it’s sad when people my age are excited by the prospect of seeing Britney Spears (who’s two years older than me) in concert. Don’t they realise she’s just a vacuous example of our generation? Why aren’t they listening to Radiohead or someone respectable.

The other area this whole generation gap expresses itself in is fashion. I want to know if I’m going to suddenly start dressing like an old person – or if what I wear now, or what others of my generation wear now, will suddenly become old person clothing at some point. I can’t wait for vintage vintage T-Shirts to be the clothing of choice for vintage people. As someone who grew up wanting to find grandpa shirts in op-shops I sense some sort of irony in people buying the t-shirts I wear now in op-shops in twenty years. All in a bid to be cool and authentic.

*Totes is an actual quote from several of the next generation’s statuses. It’s a dumb word. It means totally. This is the generation gap at work people.

So, I have a proposition I’d like to make publicly to Ben (of Vanishing Point fame)…

The title of this post would make a good shirt wouldn’t it? A cool cartoon about grumpy old men… something like this media pyramid but about growing old and dividing your time between telling stories about the good old days, complaining about the youth of today, etc, etc…

I reckon Ben could draw something awesome… something in this vein… 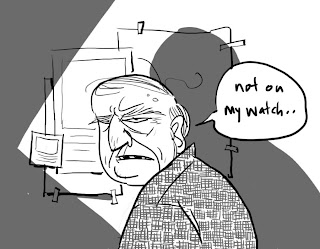 But I digress, this pyramid was really the reason for this post. It’s from Wired.