The Queensland Government is launching a new disaster management web portal, to do so, they’ve run a trial on the basis of a zombie invasion. Inadvertently causing a bunch of chainsaw wielding vigilantes to run around hacking up teenagers in hoodies with their vacant stares and dribbling propensity for gibberish. Well. That’s not true.

Getting the deputy commissioner of police to talk about a zombie attack is pretty brilliant.

In case you are interested in psychologically preparing your children for the upcoming zombie apocalypse – here’s a book for kids.

Get it on Amazon.

Perhaps you also want to ward zombies off from your door. This door stopper might help. 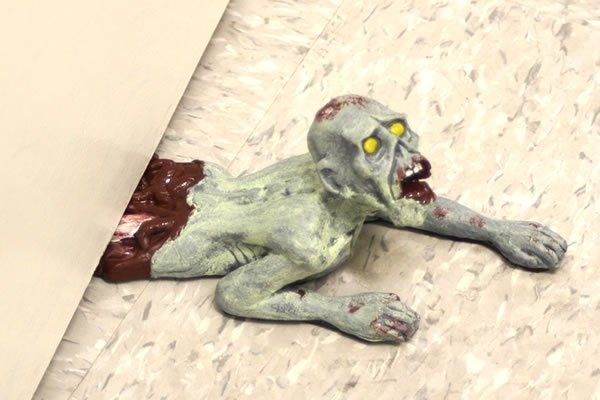 If you want some zompocalypse survival tips you can find some previous posts on the subject here.

I’ve been on a bit of a sound wave this morning – with my earlier posts – and the slightly more heated than anticipated comments on my anti-U2 post. I’m not surprised. Bono’s public Christianity makes him a bit of a sacred cow.

But I don’t like to criticise things without offering solutions here are 5 bands that are better than U2. In my opinion*…

There’s six bands in a list of five bands that I find more sonically pleasurable than U2. Here are 10 more that fit that category off the top of my head (or out of my iPod – which does contain a bit of U2 – early U2, back when the Edge didn’t look like the kind of guy you’d keep your children away from at public parks).

If you like saccharine music and just can’t help yourself – why not listen to Dave Matthews, or Simon and Garfunkel…

Those are just the bands – there are plenty of solo artists or balladeers who write nice, sweet music who are infinitely more compelling than a 50 year old who petulantly refuses to remove his sunglasses. I won’t list them. I think I’ve made my point. Why listen to one band that tries to appeal to every aspect of musicality and becomes middle of the road when you can embrace diversity which lets you appreciate the whole road, bit by bit.

*I’m not sure this needs to be said on a blog. That’s kind of the point.