So tomorrow is election day. After a year of ridiculousness we finally get to put the longest and most annoying election campaign in history to bed.

This campaign involved both parties, but particularly the ALP, sinking to new lows and treating the electorate with an incredible degree of contempt. We are not stupid.

The latest in this cascading, nay, spiralling, cycle of stupidity comes in the form of Anna Bligh’s early concession advertisements – which plead with voters not to punish her party too harshly on the basis that Campbell Newman will have “unfettered” power if he wins a significant majority. This is an interesting pitch. In some sense it’s an improvement on the horrible ad hominem negativity Labor relied on for the first 11 months of this election campaign. If this is plan B, plan C must be terribad. This line of argument is incredibly stupid. For two reasons. Essentially, so far as “power” is concerned – there is no difference between a one seat majority, and a fifty seat majority in the Queensland parliament – especially as there is no senate. The argument also strikes me as being a little hypocritical, given that back in 2004 the Labor party had a 63-20 majority. And they weren’t complaining about the damage this did to democracy then.

Anyway. As Christians, who are more than just your “tick a box on census day” Christians, there’s all sorts of pressure that different people attempt to pile on to us to sway our votes. If it’s not the ACL telling you where everybody stands on the “important moral issues” it’s Family First telling you that their stance on all those moral issues is, to quote the musician Beck, where it’s at. I listened to a panel discussion on 96.5 (a Christian radio station in Brisbane – for those of you reading outside of south east Queensland) last weekend, featuring a good and very reasonably minded friend of mine, and the implicit, if not occasionally explicit message from the show was that a Christian can’t really, in good conscience, vote anything other than conservative. Which, quite frankly, is ridiculous. While we should be mindful of employing a historical fallacy – that how things used to be, or how things were in the beginning, is equal to how they are now – both Labor and the Coalition parties were established to promote, or protect “Christian” values. And both historical party platforms have important messages in particular times and places. Thankfully, modern Australia isn’t really that place – the parties essentially agree on almost all the major issues. We have it pretty good in Australia – and our politicians, while approaching issues from different philosophical frameworks, are essentially just putting different window dressing on the same shops.

The problem with most Christian “how to vote” cards, policy trackers, and any sort of suggestion that God endorses the policy platform of any party, is that life is complex, and democratic politics involves complexity and compromise. It’s be great to be able to force everybody to do what we want, but not so great when the boot is on the other foot.

So here, before I go any further, is “how to vote” tomorrow. As a Christian. Or as anybody.

Vote with your head.

That’s it. You can stop reading now. If that’s all you were after. Participating in a democratic process is an incredible privilege, and abusing it is a sure-fire way to end up with a bad government, and a lowest common denominator form of political campaigning.

Here’s my handy “how to vote” card for any Australian election – it was prepared for the last Federal Election, but is still relevant for tomorrow. 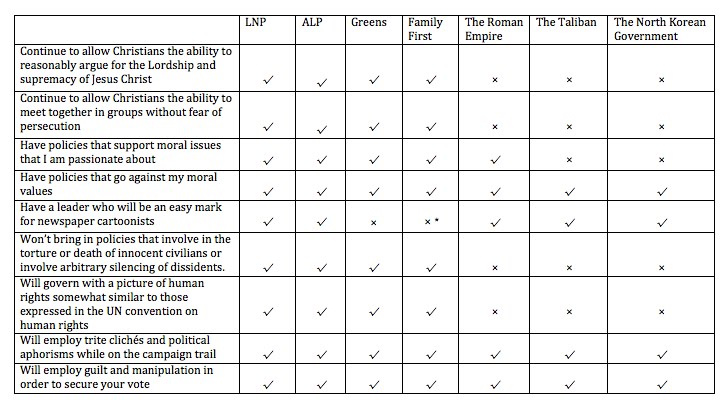 This may be an over simplification, because we have to acknowledge that there are hot-button issues for Christian voters. Some of us feel so strongly about a Christian moral framework that we only want Christians governing the country. And we want the country governed using a Christian worldview. We like to appeal to Australia’s so called “Christian heritage” to justify lording it over our heathen neighbours, who on the whole, just want to eat, drink, and be merry – without us interfering. The Christian heritage assumption is based on a pretty questionable interpretation of some historical data, I’m not going to argue that our system of laws isn’t based on Judea-Christian values – because they are – but I doubt that Christianity was ever practiced by the majority of Australians in any meaningful way (church attendance has consistently been much lower than those who nominate as Christian in the census). If you want you can read my Australian Church History essay on this question.

I posted on abortion recently – and it’s an issue many people feel pretty strongly about. Strongly enough that it might influence their vote. And possibly With good reason. Abortion, to my mind, involves speaking out on behalf of the voiceless (the unborn) and attempting to protect and uphold life. But, the reality is that Labor and the LNP are in a two horse race to be the decision makers for the state (Katter’s Australia Party, the Greens, and Family First might compete in each electorate – but their policy platforms aren’t big enough for them to be treated as worthy of a vote). And their positions on the issue of abortion are almost impossible to tell apart. So, Campbell Newman, refused to outline his party’s position on the issue. There’s no real choice here anyway – and the way forward on this issue is something I discussed in the post linked above.

This isn’t really anything I haven’t said before. But a couple of people have asked me if I was going to post about the election. And now I have. There’s a second post following this one very shortly.

At this point, in terms of my own vote, the similarity of the major parties, and the craziness of the fringes, means that my vote is coming down to a question of style rather than substance. I feel inclined to punish Labor for their horrible campaign. Relentless negativity based on spurious accusations, directed at an individual, leaves a bad taste in my mouth. I can’t possibly vote for the Labor party after their campaign.

The countdown is over. We voted this morning. Robyn told me afterwards that she’d voted for Family First. It was a funny joke. We laughed.

Here’s why I don’t vote for Family First…

I have no numbers to back this up. But I’m sure I could find them. I know that some people who are single issue voters on abortion will get angry when I say this. But voting for family first when you’re a nominally conservative voter who doesn’t like abortion is pretty much a vote for Labor – who (despite their name being similar to the act of giving birth) are the most likely party to legalise abortion in Australian states.

Obviously the preference system allows you to make this statement while still essentially voting for the LNP – but a real statement would be made by the number of people not preferentially voting at all – and ousting a government without having to rely on preferences at all.

It may be a principled move. It may make a statement.  But it’s a phyrric victory only. So I won’t be making that move any time soon.

This is too late to change anyone’s mind anyway. But it’s my two cents worth.

Also, I think it’s slightly ironic that the Greens print out how to vote cards. They’re such a waste of paper. Perhaps we should change the legislation to allow each nominated candidate to place a “how to vote” card in the voting booth. That’s under 10 printouts per candidate per booth – rather than thousands.