Back in the 90s there was a spreadable product called “Gooba” which was simply premixed peanut butter and jam. By extension these sandwhich pillows are gooba pillows – but only if bought together. They’re sold separately. I don’t think they contain nuts so you don’t need a pillow epi pen.

Little sister number two is a big gooba fan. She even owns this shirt.

At my biggest little sister’s high school graduation – or maybe it was my middle little sister’s (they’re all a blur to me) – the school principal made a rather vacuous speech featuring a joke about a duck. A duck that walked into a bar looking for bread. I won’t retell it here. But his take on it was that the duck was persistent and would ultimately get what it wanted. It was a bad speech.

Jokes about bars are as old as bars. Probably. There are a whole lot of bar jokes in the comments of this blog here. Which also retells the duck joke. And explores the history of bar jokes. A bit. It’s actually an interesting blog. I just added it to my burgeoning list of google reader subscriptions.

Little sister number two has a long held, deep seeded (or seated?) ambition to install lego boards into her car’s dash and keep pieces for passengers to play with in the glove box. She’s been outdone. Check out this Flickr set. There are a bunch of other car modification ideas here. 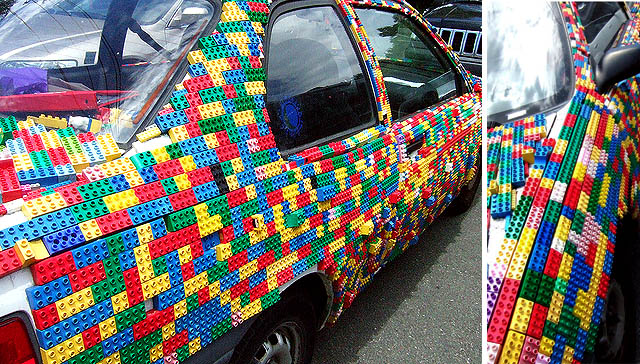