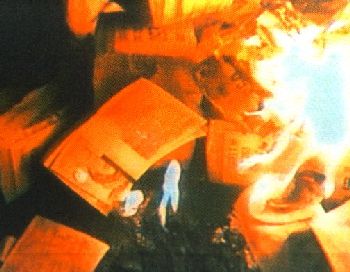 In 1994 the performance art group the K Foundation (aka musicians KLF) burned 1 million quid. They stacked up a bunch of banknotes and set fire to their hard earned dollars — capital they’d built up through years of craftsmanship. Every time I think of the way the church has responded to LGBTIQA+ issues in Australia I picture that burning money. All the social capital we spent years building through establishing schools, hospitals, and charities — advocating for the local and global poor, looking out for those on the margins… set up in flames; a $1 million dollar donation from a prominent Evangelical denomination there, an attempt by a less prominent-but-still-wanting-to-be-significant denomination to exit marriage all together if those others were granted recognition here… smoke and ashes. Gone.

One way I know we haven’t learned is that in the face of the Change or Suppression (Conversion) Therapy Bill passing in Victoria we haven’t been able to recognise that smell of smoke in the air as our own capital burning up. In fact. We’ve doubled down and stoked the fire with whatever small bills we’ve got left.

Now. This isn’t to say the Church shouldn’t be faithful, at cost to itself, in the world. Or that popularity of social capital is the essence of faithful presence in the world (though we are meant to ‘live good lives before the pagans,’ lives that are appealing and notable… but I had hoped we’d burn our social capital speaking against the powerful on behalf of the marginal (or, particularly, not out of our own self interest). Now I know, I know, speaking out for God’s design for sex and marriage and human flourishing is speaking for marginalised people. That’s true.

But when the Government acts because it says we are harming a marginalised people group through our practices, and so many of us are prepared to say ‘yes, those practices did exist in a relatively mainstream way in the past, but they’re unicorns now, but trust us…,’ the additional fuel we have to throw on the fire is this.

We keep insisting on our right to keep harming people.

At least. That’s how it reads. All the nuance in the world about what exactly we’re objecting to isn’t going to cut it so long as people are convinced that our practices and beliefs lead gay young people to suicide. All the world is hearing in our objections to this Bill is that we want to keep hurting people. We might not think we’re saying that, but there’s a big pile of smouldering bank notes sitting behind us just itching for a little more fuel. In the eyes of Joe and Jo Public, The Royal Commission showed our institutions can’t be trusted to have power over vulnerable kids, while the plebiscite showed we aren’t particularly safe for LGBTIQA+ individuals.

If we genuinely, in the interest of our neighbours, want to invite people to know the goodness of submitting one’s whole self — including our sexuality — to loving and worshipping Jesus, and we want that to be persuasive (humanly speaking), we need to rebuild our social capital — perhaps precisely by caring for vulnerable kids and the LGBTIQA+ community (creating some public distance from Andrew Bolt might be wise on that first one). Most churches have outdone themselves in responding to the findings of the Royal Commission — and there’s a vast gap between the credibility of an entire Royal Commission and one Victorian Study interviewing traumatised survivors of church practices — but maybe, just maybe, we could take those survivor’s accounts seriously and respond pastorally. Not just to rebuild our social capital as some appeasement exercise, but because it’s the right thing to do…

The other thing we might do, to take up the task of rebuilding our social capital, is heed the call of the Presbyterian Church of Australia’s Moderator General Peter Barnes to ‘preach the whole counsel of God’ in Victoria, and perhaps around the country. Rev Barnes responded to the legislation passing in Victoria by urging Presbyterian ministers around the country to: “preach all that He has revealed to us, whether law or gospel, and to do so in a spirit of love and truth.” Barnes has been praised for his courageous leadership. What the K-Foundation did was courageous too. Burning all that money. Courage isn’t necessarily wisdom.

Now. Rev Barnes was particularly encouraging ministers to clearly proclaim the Bible’s prohibition on same sex sexual intercourse, calling sin sin, that was both the spirit of the email he sent out and the spirit of the glowing feature article written by another Presbyterian Minister over at cess pit Caldron Pool, that site took a break from calling Joe Biden a Communist, to run an article headlined “Presbyterian Church of Australia Set to Defy Gay Conversion Bill”... which is just another way of saying “Presbyterian Church of Australia wants to harm Gay people.” Because the thing is, despite the scare campaign about an (overreaching) Bill, the legislation only kicks in when Christian practices are harmful. Now, harm is a nebulous and utterly subjective concept, to be sure. But. The plain reading of a headline urging defiance of a Bill that prohibits harm, is that this denomination wants to harm people. Another way of framing the article could well have been “Presbyterian Church of Australia set to set fire to $1 million” — only, we probably don’t have the money.

But Rev Barnes is right. We Presbyterians should be prepared to call sin sin. Even if it makes us unpopular. We should preach the whole counsel of God — including the Bible’s design for sexuality and human flourishing — grounded as it is in the relationship not just between man and woman, but Jesus and his bride (the church).

We should preach about greed. About affluence and Aussie comfort. About penalty rates, and the modern banking industry, and negative gearing. We should talk about how the Bible has lots more to say about the idolatry of Greed than the idolatry of sex, and how comfortable the average Aussie is with the notion that greed is good, and economic prosperity should drive our ethical decision making. Greed is sin.

We should preach about systemic racism. About how all people are made to bear the image of God, and how sin gets entrenched in structures to improve the lot of the proud and haughty — nations and systems that rule at the expense of others — and how the Kingdom of God came to reverse these structures because of God’s nature and character, and his love for all humankind. Racism is sin.

We should preach about the environment — about how we were made to be stewards who ruled the world with God, and for his purposes, to bring life and fruitfulness — but how our sin, especially greed, turned our ‘dominion’ with God into ‘domination’ and destruction. Vandalising God’s planet is sin.

We should preach about how the story of being exiles brought home to God — as gentiles — is a lot like the story of Israel being brought as refugees out of Egypt, and how that story of God’s hospitable welcome to us in Jesus, just like the Exodus for Egypt, should cause us to love and be hospitable to the refugee. Not showing hospitality to vulnerable people — our neighbours — like in the Good Samaritan — that’s sin.

We should preach about the importance of truth in an age of fake news, and hit-piece sites that run polarising attack ads on the repugnant political other. Bearing false witness is sin.

We should preach about Australia’s past; the dispossession of our First Nation’s peoples, and the ongoing systemic disadvantage they now face not just because of the original European settlement, but because of government policy decisions that led to things like massacres, and stolen wages. Murder is sin. Theft is sin. Racism is sin.

We should preach about God’s love for the poor, and the marginalised, and act in ways that led the church for generations before us to invest in building institutions like schools and hospitals not just for our own good, but the good of our neighbours, building credibility for the goodness of the Gospel of Jesus. And we should practice what we preach.

We should preach the whole counsel of God. Both law and Gospel. We should call all these things sin, in a Spirit of love, and truth. And we should offer the same pastoral support to Greedy people, racists, and toxic men.

But we won’t. Or, most of us will do that too — but we don’t get emails from the Moderator General inviting us to do this when laws pass that prop up the destruction of the environment, or support our greed, or continue our track record of racism or the abuse of refugees. We won’t get told to ‘preach the whole counsel of God’ when the Close The Gap report gets handed down, or when new statistics about family violence in our country are reported.

We’ll just keep talking about sexual morality — one of the things that was meant to set Christians apart from their neighbours. We’ll keep asking to harm people in Jesus’ name, rather than love them into an encounter with his bride, and body, the church, that makes his love tangible and oh, so worth it.