On my way to college today I was listening to Queensland Treasurer Andrew Fraser in a regular Friday morning slot he has on ABC radio with his opposition equivalent.

For those not living in Queensland, or disinterested in the comings and goings of our political scene, our politicians emerged from a crisis meeting about the unpopularity of our government with one new “policy.” Our Premier has ordered her minions to “walk a mile” in the shoes of Queensland’s constituents. She wants her MPs to spend a couple of days in the real world. Working real jobs.

Basically the whole thing is being portrayed as an extended photo opp. Which it currently is. There’s an assumption amongst our political class that being seen on a construction site wearing a fluorescent vest and a helmet wins votes. And it certainly links government policies with job creation.

But I propose a novel idea for the Bligh Government. Being in touch with the people is a valuable thing. I think there is some merit to this exercise. But if the government wants this to not be written off as a vacuous PR exercise they should ban the cameras, and do no media interviews about the experience. They should each be allowed to make a speech to parliament about their experience and changes they think should emerge from working with real people. But that should be it. A media blackout. No interviews. No contrived photo opportunities. No interrupting a real person’s work day for the sake of the 15 seconds it’ll buy on the news. That is how to make this a positive PR exercise not a negative one. The people you’re imposing yourself on don’t need to be treated like performing monkeys who happen to specialise in working a real job.

Here’s his plea to the PM…

I think he really ought to see it as one of his responsibilities to use the language as it’s meant to be used. I mean he does understand language very well, he knows when and how to use it well, which makes it all the less forgivable that he uses it so tiresomely so often.

Here’s his take on spin.

They just send us messages, and they call it spin, you know, which look if it was spin it would be fantastic, I wouldn’t mind it. Spin sort of suggests something mesmerising. This isn’t spin it’s anaesthetic. It’s like a big cloud of gas that comes over and makes cutting your toenails look interesting.

Spin gets a bit of a bad wrap. Everybody spins. Some people just declare it more than others. Here’s an example of how spin can be helpful, not dishonest.

Both statements say essentially the same thing. One is more likely to get people to consider a holiday in Townsville.

In the comments of a previous post Mark asked: “when it comes to presenting a message, how clear are the boundaries between persuasion, influence and manipulation?” As I’m a renowned “PR Spin Twit” (according to the local paper’s nasty “Magpie” column) I feel I’m qualified to tackle that question.

The organisation I work for is a “marketing” and “economic development” body – by our very nature we engage in all three of the above. We promote North Queensland as a tourism, relocation and investment destination – that involves an element of persuasion. All marketing should – otherwise what’s the point. Obviously you have to have faith in your product or you’re getting into a pretty murky area.

The Queensland Government has been mocked relentlessly for employing more journalism graduates than anybody else in the state – and for having such a massive public relations machine at its disposal. I would argue that the Government has been elected to govern, and make decisions, and we’ve elected them because we believe they’re the best available people for the job – so we should want their point of view on things. Then it’s the media’s job to keep them accountable.

If the government of the day can’t persuade us of the benefit of their new policy (eg workchoices) then we can vote them out. I’m down with the importance of persuasion when presenting a message.

Objectivity is important (for the media) – but objectivity doesn’t necessarily mean not subjective to persuasive – it means coming to the facts without prior bias.

From a “spin” perspective you hope that the media accept your angle on things as the best, most objective understanding of them. That usually comes because you or your organisation has a reputation of credibility.

When I studied a subject on persuasive writing at uni I wrote about why pineapple shouldn’t be put on pizza, and why intelligent design shouldn’t be taught in science classes (but in philosophy or religion classes). I remember the basic elements of persuasion we were taught were pathos (use of emotion), stats, and I think having a clearly defined idea of your arguments and the benefits of subscribing to your view. There were probably more. I’ll check at home. But that says more about the mechanics of persuasion than the nature of persuasion – which is simply to move people to your point of view.

If you’re not a decision maker – but you want a decision to be made – you become a lobbyist (or using our politically correct terminology “an advocate”). Here’s where influence comes into play. Again, influence comes (or should come from) from a position of believing what you do is the right thing. As we saw in our recent climate change debate there are many views on one issue, and at the risk of sounding like a relativist, all of them have elements of rightness to them. It is right to care for the environment. It’s also right to care for people. I just tend to think one is more right than the other (and that one does not equal the other) – so I’ll try to influence people that way. By what I say, what I select to use to back up my arguments and how I respond to people with contrary views.

I don’t see a lot of difference between influence and persuasion – except perhaps in the dynamic of power. I’d say that persuasion comes from those in power, and is an exercise of power in order to bring people round to a view. By contrast influence is what you try to do to change the mind of someone in power (or with the ability to act on your wishes). That’s a little simplistic because both words can be used in many contexts. However, in the context of “messaging” that would be the best point of difference between the two.

Manipulation would, if being used in the context of presenting a message, seem to be an abuse of power.

I think though there’s an element of manipulation in any spin. There are plenty of things that our organisation pursues that people disagree with (new refineries anyone?). Some of the “persuasion” we undertake through the local media probably borders on manipulation – we try to make it seem wrongheaded to protest about these things that are putting food on the table for local families. Manipulation tends to misuse pathos, employing overly emotive language, rather than the facts generally employed by “persuasion”. But facts are pretty easily manipulated too.

Anyway, that’s a long answer to a short question. If there’s anything you thought I’ve missed, or you’d like to add, go for it in the comments.

I pushed pretty hard to change my title from the impressive sounding (but utterly meaningless) “Corporate Communications Executive” to “Spin Doctor”. I failed.

It would be nice for the corporate world to be more honest about the work it does at times – these folders would help. They’re $US8.49 – a worthy price to confess the total crapness of the nature of your current projects.
Found via Foolish Gadgets – who continue to live up to their name. 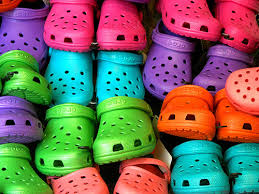 Ok, so these ones do. And that title is a really bad pun. But fresh from talking about a sticky situation involving the Coogee Bay Hotel, we have been confronted with our own PR crisis.

For those of you not familiar with the story here’s the précis, the tourism dependent community of Magnetic Island was recently in lock down as a rogue crocodile terrorised the bays and streets of the island. But the plot thickened – it turned out the EPA, in its infinite wisdom, had captured the crocodile in Far North Queensland and released it near Townsville. Then, as it began wreaking havoc upon the poor island, they couldn’t catch it. This of course led to calls from the ever reliable walking quote machine, Bob Katter, for a croc cull. Crocodile leather is desirable for shoes, hand bags and other accesories – they also interfere with our right to enjoyment of nature – or so the argument goes. It was eventually caught – only to die in captivity a day later – an autopsy revealed that the croc’s stomache was lined with plastic bags, and other rubbish which led to its untimely demise. Untimely, arguably because it should have died three weeks earlier.

This was a PR nightmare for all involved (except Bob Katter).

In particular:
The EPA now stand accused of killing some small businesses due to their ridiculous “crocs in space” program. They had an electronic tag on the crocodile and still couldn’t find it. They mishandled the situation allowing operator after operator to front the media lambasting them and demanding compensation – the State Government pretty much ruled it out on the spot – and now can count on no votes from Magnetic Island at the upcoming election. Even the greenies hate them because the croc died. It’s all their fault.

The Magnetic Island operators themselves have done as much as possible to tarnish the region’s image – by yelling “CROC” from the roof tops and going about dealing with the Government in an inappropriate manner. They shot themselves in the foot (they should have just shot the croc). The local tourism industry – Magnetic Island is the “jewel in our crown.” That’s the official line. I know because I wrote it. Now, in the mind of the uneducated consumer it is no longer a pristine island destination with safe beaches – it’s a garbage filled wasteland populated by deadly crocs. The tourism minister proclaimed crocs as “good for tourism.” That, according to those on the ground was untrue. That line only works when describing Australia Zoo and other crocodile farms. Crocodiles on public beaches are bad for tourism. The plastic bags, in all likelihood, came from far north Queensland, where the waters are messy. I wanted to run a media release on that basis titled “Far North Queensland full of old Cairns and plastic bags” – but I was outvoted. Common sense prevailed.