No, this isn’t a post about Jeopardy. Have you ever seen a billboard that just didn’t make sense? Have you ever seen one of those billboards that came from a Christian organisation? Well, here’s one. So now you can answer “yes” to both those questions… It makes no sense to me at all – perhaps you can explain it to me. 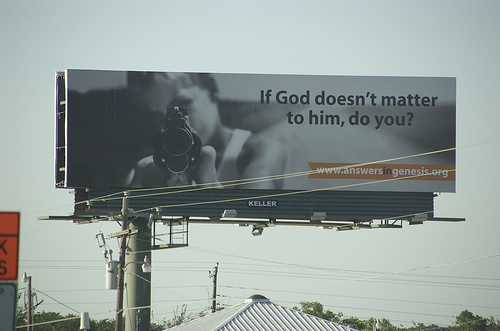 Answers in Genesis even made this into a video advert on YouTube. I think they’re suggesting that if you’re not a Christian you’re likely to shoot people because you don’t really care about them – or that people who don’t believe in God are more likely to shoot you because they don’t care about you.