This gallery is a bit of fun, and nicely pulled off.

While you can be a real life superhero for the cost of some kevlar body armour and some lycra, being the real deal, ala playboy superheroes (as in the type who are single and wealthy, as in Batman or Iron Man), is apparently a costly exercise. The other day io9 worked out what it would cost to be Iron Man, and moneysupermarket.com pulled together these two infographics.

This gets style points for so closely matching the soundtrack. But if The Avengers wasn’t supergroup enough for you, imagine all these guys teaming up…

HBO, makers of wonderful television, has produced a documentary on one of my favourite topics. Real Life Super Heroes. They’ve profiled members of the RLSH community in TV form.

I like this. Can you pick the heroes? They’re decoded here (where you can also buy the shirt).

Did you ever dress up as a superhero as a kid? Did you leave photographic evidence with your cruel parents? Then look out. Here’s a group photoblog dedicated to immortalising those moments where you tried to express your inner super hero. Other than solving crimes and catching bad guys the life of the Superhero is surprisingly normal. Though superpowers do come in handy for domestic duties.

Batman, being a lame unsuperhero, has been foreclosed.

From Super Not So Super.

Ever wondered where all the superheroes go when they’re too old to continue as caped crusaders? They never seem to get old in the comics, and yet technology changes around them. Weird.

But now, the secret is out. There’s some sort of Superhero nursing home out there…

Photographer Agan Harahap put together a little gallery of World War Two photographs featuring superheroes. The good guys could not have won the war without this sort of external help… 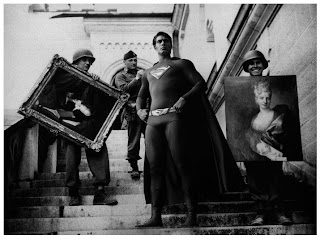 That heading is possibly a lame reference to the Ninja Turtles’ catch cry – if you didn’t pick that up… if it needs explaining it’s clearly a bad title. 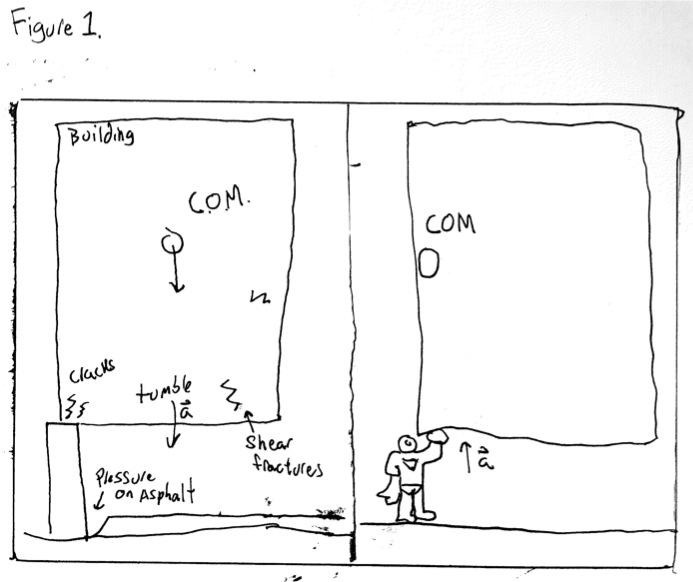 Remember the Real Life Superheroes? No, probably not. I wrote about them back when I had about six readers. They get a write up in today’s SMH.

They have such lame names. But that’s pretty standard for Superheroes. I do wonder – with reference to the title – if a person’s title is called an honorific whether one’s superhero name is a heroific? After watching Wolverine yesterday – aka X-Men Origins, I read through the Wikipedia entries on the characters just out of curiosity (starting here) – I wanted to see how faithful the movie storyline was to the actual comics. Turns out the answer to that question is “not very” – but that’s ok, I enjoyed the movie and I’m not a comic book fanboy – or a Mark Driscoll fanboy – though I only use that phrase to ensure my ongoing google pensupremacy* for that phrase.

*I assume given that penultimate is the thing before the ultimate that pensupremacy is the entry before the top entry. Who knows. Correct me if I’m wrong. Actually, don’t. It was merely a bit of wordplay. I take it all back. Except that I leave it all there.

There are a surprising number of songs about heroes. Marvel has made a pretty penny lately turning their archive of comic book superheroes from the Marvel Universe into silver screen stars. But that’s a well that will eventually run dry. They’ve only got the finite character resources of the Marvel stable available…

This poses a problem for movie makers – given the cinema going audience’s penchant for a good superhero flick – they’re in dire need of some new material that will cut through to the cynical comic book aficionado. Realistic heroes fighting the good fight. Fighting for truth, righteousness and justice. Whatever are they to do? Luckily there’s an as yet untapped resource out there. The World Superhero Registry a one stop shop for active Superheroes currently patrolling earth. It seems to me that this is a dangerous resource, letting all those unlisted supervillains out there know just who might come charging through their doors at any time. I don’t know about you – but I’m really glad that Citizen Prime is out there patrolling the streets with his cohort of RLSHs (Real Life Super Heroes) …

What’s a Real Life Superhero?
According to the World Superhero Registry FAQs:

How do you become a RLSH?

“Usually, we become aware of a Real-Life Superhero’s activities and add them on our own initiative. If you wish to request to be added to the registry, please read the recommended submission guidelines. We will review your request and if we feel it meets our standards, it will be added.”

Perhaps to inspire RLSHs – or in a bid to develop some user generated movie superheroes – Marvel have an online Superhero character creator. I give you: Yellow and Blue Man… a bearded sword wielding hero guaranteed to strike fear into the hearts of wrongdoers everywhere.

I grew up watching reruns of the 1960s Batman serial starring Adam West. I bought the DVD of the Batman Movie spin off from the same series for about $7. It’s probably the worst Batman movie ever made. Even worse than the one with Arnie as Mr Freeze. But I digress. The thing that made that Batman series so good was the super imposed, jagged edged, comic book style “sock”, “pow”, and “zap”. Action onomatopoeia at its best.

If, like me, you grew up wanting to pack a punch like Batman – then this 950,000V infusing knuckle duster will give your self defense a real “wham” effect. The best bit – a set of these – for your own fists of fury – will only set you back $US100.

See what’s happening here? It’s the X-Men effect. Asking “what would your mutant power be?” is a great ice-breaker. And today’s inventors are going about developing all the cool mutant powers you can think of… these knuckledusters will help aspiring Surges (from the “new X-Men”) discover their electric personalities.

It seems invisibility isn’t far off either. What would your mutant power be?