Well firstly, Ben drew me this. 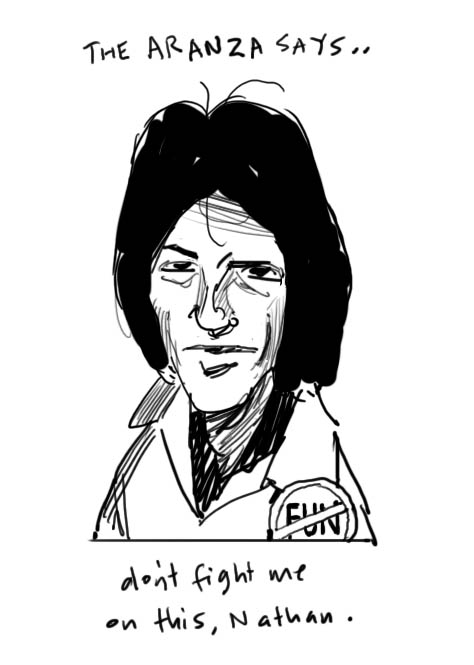 If I were to come into your home and tell you to worship Satan I wonder what your response would be. I presented this question to a crowd of young people I was to speak to about rock and roll. Their response was one of complete shock. It sounded as removed from rock and roll as the subject of sex might seem. Yet sex is just as related as Satan is to rock and roll.

This passage doesn’t quite equate sex with satanism. But it gets pretty close.

In 1954 a Cleveland Disc Jockey by the name of Alan Freed was searching for a name to describe a new music fad pioneered by men such as Gene Vincent, Chuck Berry, and Elvis Presley. Freed finally found a name he borrowed from the ghetto term describing premarital sex. The name was rock and roll.

I’m just glad we have guys like Jacob who can equip us with the facts – so was one seventeen year old girl, who told her teacher after one of Aranza’s rallies:

“Many people have come and given us their opinion on rock, but finally we have heard the facts.”

Rock is bad. M’kay. The Beatles claimed to be bigger than Jesus (probably statistically true if you consider Beatles album sales to the crowds Jesus preached to – though not if you consider total converts). Just when we thought we were safe – post Beatlemania – we got Janis Joplin and Jimi Hendrix. Who wanted to do drugs, drugs and more drugs. Drugs are bad. M’kay.

The worst, according to Jacob Aranza, was not the “son of a Mormon preacher” Alice Cooper, but KISS (Kids in Satans Service).

Rock and roll magazines call them fire breathing demons from rock and roll. Former member Peter Criss declares “I find myself evil”… Gene Simmons says “I’ve always been interested in what human flesh tasted like, and I have always wanted to be a cannibal.”

“Marvel Comics produced a special edition dedicated to KISS. Blood samples were taken from the group and smeared on the [printing] plates so they could say literally that the comic was printed in the blood of the band. Marvel editor Steve Gerber aimed the magazine directly at eight- to nine- year olds”

But don’t despair.. just when you thought it couldn’t get worse, it did…

Still the road to rock would be paved with many other groups to come. Everyone waited. What next? I was in Europe in 1978 and saw the new beginning. I was speaking in an open market place in England when, in the middle of my message, a teenager came and stood across from me. I tried not to stare. But it was difficult. His hair appeared like a long crew cut. It stuck straight up in the air, uneven and jagged in many places. I had never seen anyone with safety pins stuck in their face before, or leopard skin pants on. Maybe it was the pink, red, orange, blue and blonde hair that caught my attention.

After I finished speaking he walked over to me and said, “hey, what’s wrong with you man?” I couldn’t believe it… He was asking what was wrong with me?

This was my first encounter with what was to come, namely, punk rock. When I found out what he represented I laughed to myself and said “The kids in America will never go for this!” But they did.

The Religion of Rock and Roll

Veteran rocker Leon Russell said in an interview “I’d like to say the religion of Christianity has done more harm than any other single force I can think of in the world.” When asked what an alternative would be he suggested “the religion of rock and roll.”

Still surprised? You can see why rock has had such a devastating effect on America and the entire civilised world.”

That’s right people. Lock up your children. The religion of rock and roll is coming to get them. And for those of you who think this is just scaremongering. Think again. Here are the three things that change when somebody joins a religion (or cult) according to Aranza:

The Beatles are living legends. Their music brought with it a tidal wave of drugs, sex and the occult.

The Beatles PR guy, Derek Taylor (who might have been doing some PR at the time) convinced Aranza when he said:

“They’re completely anti-Christ. I mean, I am anti-Christ as well, but they’re so anti-Christ they shock me which isn’t an easy thing.”

Also George Harrison was a leading backer behind the movie “The Life of Brian” (which was a mockery of Christ).

A first look at the Bee Gees would leave the impression that they are quite wholesome, a look into their private lives would expose the unwholesome values that they have.

Robin Gibbs admits to a hobby or pornographic drawings and all three members of the group lace their comments with obscenities.

They also do drugs.

Eric Clapton
Eric has been given the title of the world’s greatest living guitarist. But he fell into a period of heroin addiction. He was finally treated with acupuncture for his addiction.
Alice Cooper

Vincent Furnier, a Mormon preacher’s son from Arizona received his stage name while playing with a Ouija board. The board spelled out Alice Cooper and promised him world fame if he would change his name to the name of that 17th century witch, Alice Cooper. He later claimed to be the reincarnation of that witch.

Summary of the next bit: He does bad stuff on stage.

“Albums include Billion Dollar Babies and Alice Cooper goes to Hell. All these hellish and sexual overtones that Alice uses don’t make it hard to believe that he is going to hell and taking many others there along with him.”

For those not in the know – Alice Cooper is now a “born again” Christian (and a Sarah Palin fan), one can only hope Aranza was man enough to write him an apology. Cooper said this about his faith:

“It’s really easy to focus on Alice Cooper and not on Christ. I’m a rock singer. I’m nothing more than that. I’m not a philosopher. I consider myself low on the totem pole of knowledgeable Christians. So, don’t look for answers from me.”

“Drinking beer is easy. Trashing your hotel room is easy. But being a Christian, that’s a tough call. That’s real rebellion!”