The 95 Theses were the beginning of a social media campaign which went viral. This is an interesting take on the Reformation – but hear it out.

Image Credit: Art.com (you can buy this as a print)

Does social media cause change?

The Reformation, like the revolution in a famous Malcolm Gladwell piece, may or may not have been fuelled by social media. Or Luther’s equivalent. Propaganda 1.0.

Here’s Gladwell’s summary of the argument he doesn’t agree with.

“The world, we are told, is in the midst of a revolution. The new tools of social media have reinvented social activism. With Facebook and Twitter and the like, the traditional relationship between political authority and popular will has been upended, making it easier for the powerless to collaborate, coördinate, and give voice to their concerns.”

Gladwell thinks it is high risk activism that brings change – rather than “social media” – but this is a bit of a category error. He thinks people are trying to argue that social media is the basis of activism rather than a channel for communication, and he’s dismissive of “one-click” activism (as am I – especially in the form of awareness raising).

“Boycotts and sit-ins and nonviolent confrontations—which were the weapons of choice for the civil-rights movement—are high-risk strategies. They leave little room for conflict and error. The moment even one protester deviates from the script and responds to provocation, the moral legitimacy of the entire protest is compromised. Enthusiasts for social media would no doubt have us believe that King’s task in Birmingham would have been made infinitely easier had he been able to communicate with his followers through Facebook, and contented himself with tweets from a Birmingham jail. But networks are messy: think of the ceaseless pattern of correction and revision, amendment and debate, that characterizes Wikipedia. If Martin Luther King, Jr., had tried to do a wiki-boycott in Montgomery, he would have been steamrollered by the white power structure. And of what use would a digital communication tool be in a town where ninety-eight per cent of the black community could be reached every Sunday morning at church? The things that King needed in Birmingham—discipline and strategy—were things that online social media cannot provide.”

Activism, be it Martin Luther King’s rallies, or Martin Luther’s nailing of 95 theses to the Wittenburg Door as a highly symbolic and evocative PR stunt, requires both a medium and a message. Further, this package requires channels and connections by which it is transmitted. Which is where social media comes in now, and where the virality of the reformation and its use of social media gets interesting. This is where Gladwell’s piece is perhaps too dismissive of the technology.

The Reformation was another grassroots protest movement, which according to this fascinating history published in the Economist, which is wonderfully rendered and somewhat persuasive, was aided by the social media of its time.

“It is a familiar-sounding tale: after decades of simmering discontent a new form of media gives opponents of an authoritarian regime a way to express their views, register their solidarity and co-ordinate their actions. The protesters’ message spreads virally through social networks, making it impossible to suppress and highlighting the extent of public support for revolution. The combination of improved publishing technology and social networks is a catalyst for social change where previous efforts had failed.

That’s what happened in the Arab spring. It’s also what happened during the Reformation, nearly 500 years ago, when Martin Luther and his allies took the new media of their day—pamphlets, ballads and woodcuts—and circulated them through social networks to promote their message of religious reform.”

Luther understood something of the way to spread his message via the media of his day. The response to his initial PR stunt was a bit of a “tipping point” to borrow another Gladwellian phrase.

“The unintentional but rapid spread of the “95 Theses” alerted Luther to the way in which media passed from one person to another could quickly reach a wide audience. “They are printed and circulated far beyond my expectation,” he wrote in March 1518 to a publisher in Nuremberg who had published a German translation of the theses. But writing in scholarly Latin and then translating it into German was not the best way to address the wider public. Luther wrote that he “should have spoken far differently and more distinctly had I known what was going to happen.” For the publication later that month of his “Sermon on Indulgences and Grace”, he switched to German, avoiding regional vocabulary to ensure that his words were intelligible from the Rhineland to Saxony. The pamphlet, an instant hit, is regarded by many as the true starting point of the Reformation.”

“Unlike larger books, which took weeks or months to produce, a pamphlet could be printed in a day or two. Copies of the initial edition, which cost about the same as a chicken, would first spread throughout the town where it was printed. Luther’s sympathisers recommended it to their friends. Booksellers promoted it and itinerant colporteurs hawked it. Travelling merchants, traders and preachers would then carry copies to other towns, and if they sparked sufficient interest, local printers would quickly produce their own editions, in batches of 1,000 or so, in the hope of cashing in on the buzz. A popular pamphlet would thus spread quickly without its author’s involvement.

As with “Likes” and retweets today, the number of reprints serves as an indicator of a given item’s popularity. Luther’s pamphlets were the most sought after; a contemporary remarked that they “were not so much sold as seized”. His first pamphlet written in German, the “Sermon on Indulgences and Grace”, was reprinted 14 times in 1518 alone, in print runs of at least 1,000 copies each time. Of the 6,000 different pamphlets that were published in German-speaking lands between 1520 and 1526, some 1,700 were editions of a few dozen works by Luther. In all, some 6m-7m pamphlets were printed in the first decade of the Reformation, more than a quarter of them Luther’s.”

Ben (economist Ben not Vanishing Point Ben) scoffs at the Big Mac index. He thinks it’s economically trite. I think it’s a worthy comparison of the economies of different countries. Here’s a new chart that takes an interesting new direction with the traditional concept used to measure purchasing power… 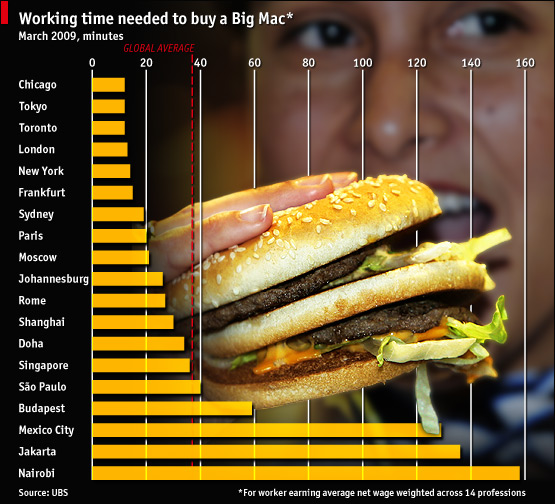