I’ve been saying since we had our first (non 3D) ultrasound that the future is hooking up a 3D printer to the 3D scanner. Well people. The future is now. 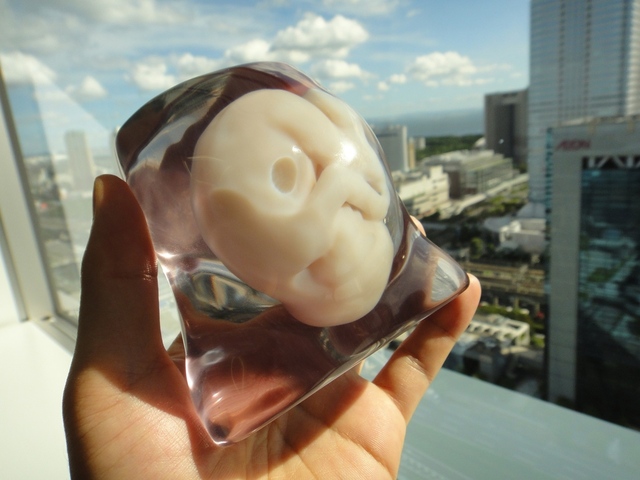 “The result is a scale reproduction of your unborn baby, composed of an opaque white fetus encased in the mother’s clear, colorless abdomen. If you’re interested in procuring your own 7-ounce inaction figure, the price is ¥100,000 (about $1,275), and while that includes the decorative pink-and-white box, fetus keychains and cellphone dongles made with the same process will cost you extra.”

This is the future. According to google, and the internet users of the world. And it’s yet another reason that you should read XKCD.

Douglas Coupland coined the named Generation X and wrote some books that I like. He’s put forward forty five theses on the future. That are interesting and thought provoking. Here are some of my favourites.

8) Try to live near a subway entrance

In a world of crazy-expensive oil, it’s the only real estate that will hold its value, if not increase.

This is a no-brainer, but the former homes will make amazing hangouts for gangs, weirdoes and people performing illegal activities. The pretend gates at the entranceways to gated communities will become real, and the charred stubs of previous white-collar homes will serve only to make the still-standing structures creepier and more exotic.

You’ve become a notch in the Internet’s belt. Don’t try to delude yourself that you’re a romantic lone individual. To the new order, you’re just a node. There is no escape.

21) We will still be annoyed by people who pun, but we will be able to show them mercy because punning will be revealed to be some sort of connectopathic glitch: The punner, like someone with Tourette’s, has no medical ability not to pun.

33) People who shun new technologies will be viewed as passive-aggressive control freaks trying to rope people into their world, much like vegetarian teenage girls in the early 1980s

1980: “We can’t go to that restaurant. Karen’s vegetarian and it doesn’t have anything for her.”

2010: “What restaurant are we going to? I don’t know. Karen was supposed to tell me, but she doesn’t have a cell, so I can’t ask her. I’m sick of her crazy control-freak behaviour. Let’s go someplace else and not tell her where.”

35) Stupid people will be in charge, only to be replaced by ever-stupider people. You will live in a world without kings, only princes in whom our faith is shattered

If, over the next forty years, you want to keep a running tally of how closely Hollywood’s vision of the future matches our own – your job is made easier by this chart…