I’ve been thinking a little more about one of the points I was chewing over as I wrote yesterday’s thing about church for atheists – just how De Botton’s proposed London temple seems geared to produce some sort of nihilistically driven depression because it makes it clear that people are oh so insignificant in the scheme of the universe. 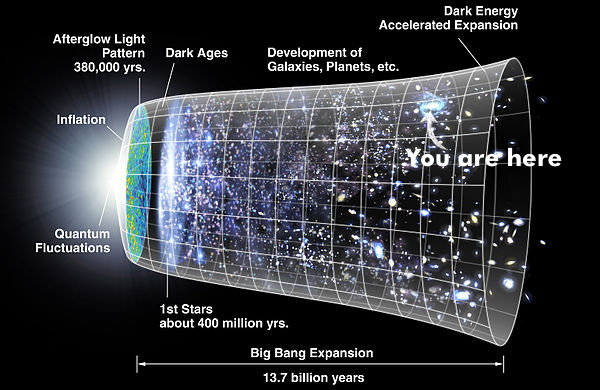 It’s a horrible narrative to find yourself part of… unless you’re prepared to buy into the idea that you’re totally at the heart of the universe. Which is, of course, what happened with Zaphod Beeblebrox when he confronted the Total Perspective Vortex in the Hitchhikers Guide to the Galaxy story The Restaurant at the End of the Universe…

The Total Perspective Vortex is a torture chamber that leaves most people in a nihilistic malaise, broken by the realisation of their own abject insignificance. It does this pretty much by presenting the same truth that De Botton proposes to celebrate…

“When you are put into the Vortex you are given just one momentary glimpse of the entire unimaginable infinity of creation, and somewhere in it a tiny little mark, a microscopic dot on a microscopic dot, which says, “You are here.””

That sort of perspective hurts…

“At that moment another dismal scream rent the air and Zaphod shuddered.

“What can do that to a guy?” he breathed.

In the book, the guy who built it did so because his wife nagged him…

“Have some sense of proportion!” she would say, sometimes as often as thirty-eight times in a single day.

And so he built the Total Perspective Vortex — just to show her.

And into one end he plugged the whole of reality as extrapolated from a piece of fairy cake, and into the other end he plugged his wife: so that when he turned it on she saw in one instant the whole infinity of creation and herself in relation to it.

To Trin Tragula’s horror, the shock completely annihilated her brain; but to his satisfaction he realized that he had proved conclusively that if life is going to exist in a Universe of this size, then the one thing it cannot afford to have is a sense of proportion.

The vortex is a little chamber, with a single door, that contains the whole universe…

“At the far side of it stood a single upright steel box, just large enough for a man to stand in.
It was that simple. It connected to a small pile of components and instruments via a single thick wire.
“Is that it?” said Zaphod in surprise.
“That is it.”
Didn’t look too bad, thought Zaphod.
“And I get in there do I?” said Zaphod.
“You get in there,” said Gargravarr, “and I’m afraid you must do it now.”
“OK, OK,” said Zaphod.
He opened the door of the box and stepped in.
Inside the box he waited.
After five seconds there was a click, and the entire Universe was there in the box with him.”

Zaphod survives, without spoiling the story, because he enters it in a fake universe where he is the centre – so the perspective provided by the Vortex actually affirms that he is uniquely, and specially, the figure at the heart of the universe.

“It just told me what I knew all the time. I’m a really terrific and great guy. Didn’t I tell you, baby, I’m Zaphod Beeblebrox!”

Here, as a reminder, is what De Botton is proposing… the Temple to Perspective. 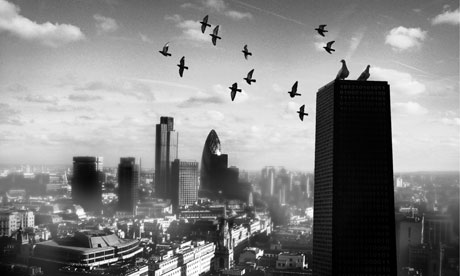 Image Credit: The Guardian – for an interesting, more to scale version, check out this pic from artinfo.com

Each centimetre of the tapering tower’s interior has been designed to represent a million years and a narrow band of gold will illustrate the relatively tiny amount of time humans have walked the planet. The exterior would be inscribed with a binary code denoting the human genome sequence… The temple features a single door for visitors who will enter as if it were an art installation. The roof will be open to the elements and there could be fossils and geologically interesting rocks in the concrete walls.

“The dominant feeling you should get will be awe – the same feeling you get when you tip your head back in Ely cathedral,” he said. “You should feel small but not in an intimidated way.”

I’d say Douglas Adams is closer to the truth. Unless you can find a way to provide yourself with value and significance, the universe is a very big place, and it’s going to blow your mind.

I reckon the Psalms, in the Bible, have a much better account for human perspective than Adams or De Botton. While the universe is really big, the Psalmist, in Psalm 8, points out that God is bigger. This both inspires awe, and gives value to humans…

1 Lord, our Lord,
how majestic is your name in all the earth!

You have set your glory
in the heavens.
2 Through the praise of children and infants
you have established a stronghold against your enemies,
to silence the foe and the avenger.
3 When I consider your heavens,
the work of your fingers,
the moon and the stars,
which you have set in place,
4 what is mankind that you are mindful of them,
human beings that you care for them?

5 You have made them a little lower than the angels
and crowned them with glory and honor.
6 You made them rulers over the works of your hands;
you put everything under their feet:
7 all flocks and herds,
and the animals of the wild,
8 the birds in the sky,
and the fish in the sea,
all that swim the paths of the seas.

9 Lord, our Lord,
how majestic is your name in all the earth!

But the story gets better. This is perspective – and it’s a perspective that gives value. This God isn’t just interested in humanity corporately – but in individuals… Here’s half of Psalm 139. We don’t get in the box and perceive the universe, the God who created the universe perceives us…

1 You have searched me, Lord,
and you know me.
2 You know when I sit and when I rise;
you perceive my thoughts from afar.
3 You discern my going out and my lying down;
you are familiar with all my ways.
4 Before a word is on my tongue
you, Lord, know it completely.
5 You hem me in behind and before,
and you lay your hand upon me.
6 Such knowledge is too wonderful for me,
too lofty for me to attain.

7 Where can I go from your Spirit?
Where can I flee from your presence?
8 If I go up to the heavens, you are there;
if I make my bed in the depths, you are there.
9 If I rise on the wings of the dawn,
if I settle on the far side of the sea,
10 even there your hand will guide me,
your right hand will hold me fast.
11 If I say, “Surely the darkness will hide me
and the light become night around me,”
12 even the darkness will not be dark to you;
the night will shine like the day,
for darkness is as light to you.

13 For you created my inmost being;
you knit me together in my mother’s womb.
14 I praise you because I am fearfully and wonderfully made;
your works are wonderful,
I know that full well.
15 My frame was not hidden from you
when I was made in the secret place,
when I was woven together in the depths of the earth.
16 Your eyes saw my unformed body;
all the days ordained for me were written in your book
before one of them came to be.

The story gets better again in Jesus… This is why Christians – not just the religious people who believe in a creator God – have the best narrative to tell and be part of… We become part of the story because God steps in, he doesn’t just know us, he loves us, and makes us his children by giving us his Spirit. It’s the complete opposite to De Botton’s temple. We’re not small and insignificant in the scheme of the universe – the God who created the universe gives himself to us… and dwells in us… here’s how Paul spells it out in Romans 8…

14 For those who are led by the Spirit of God are the children of God. 15 The Spirit you received does not make you slaves, so that you live in fear again; rather, the Spirit you received brought about your adoption to sonship. And by him we cry, “Abba, Father.” 16 The Spirit himself testifies with our spirit that we are God’s children. 17 Now if we are children, then we are heirs—heirs of God and co-heirs with Christ, if indeed we share in his sufferings in order that we may also share in his glory.”

I’m not suggesting you should pick truth based on what the best story is – but this is the sort of perspective that is going to produce awe and a good and happy life, based on being valued by an infinite personal and relational entity, not a small and depressed life based on being a speck in the scheme of an infinite universe that doesn’t care if you expire tomorrow.