All the fights from the first three Michael Bay Transformers movies supercut together. No plot. All is as it should be.

Correlation would seem to indicate causation in this case… even though cool guys don’t look at explosions. 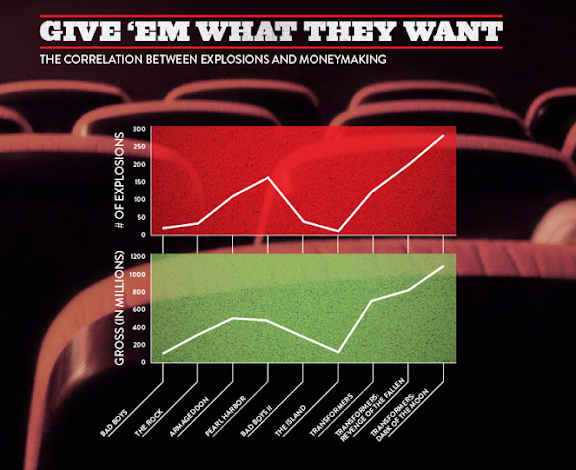 There’s a bigger exploration of the phenomenon known as “Bayhem” here. Some further stats… 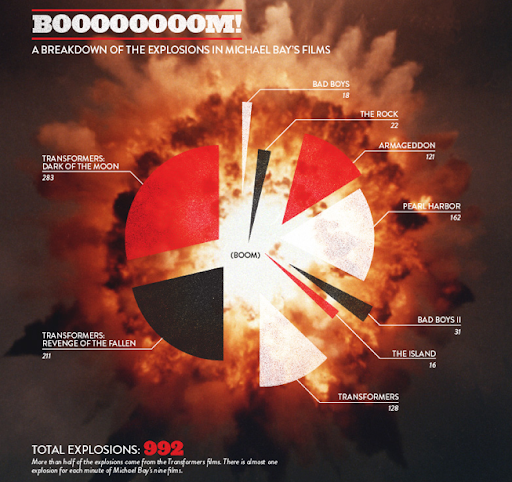 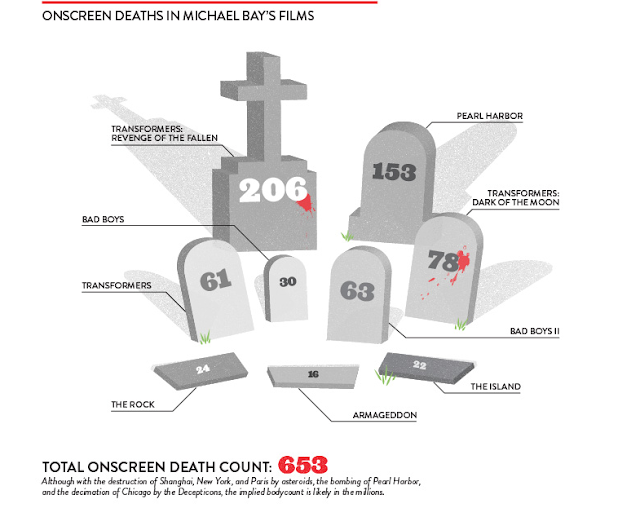 Michael Bay could probably make a blockbuster just out of the off-cuts of his previous works, so it shocks me that he resorts to using bits that aren’t off-cuts at all. Well. Shocks is the wrong word. It’s just clever.

But you can’t get away with it in the YouTube age.

The Little Mermaid is like Transformers for girls. Right? She wanted to transform into a human. That’s the only way I can explain the motivation behind this mashup.

Now, I’ve geeked out a bit over Transformers in the past, and some people have suggested that the movies are some sort of artistic nadir. Some have suggested that a third movie is scrapping the bottom of some well plumbed depths, to mix a metaphor. But not me. Because I realise that unlike Cars 2, this isn’t an automotive movie created to shift more merchandise. This is an automotive movie (featuring battling alien robots no less) that is created from the merchandise. Inspired by toys. It’s completely different. It’s not selling out to the corporate masses – it’s the natural conclusion of a market predicated on convergence of revenue streams.

Not to mention the artistic merit, and Michael Bay’s status as the maestro in his particular field. Not convinced. Watch.

There’s just something a little bit nice about this. A US soldier named Rupert Valero who loves action figures, especially robot/transformer types, has been building toys from scraps he’s picked up around Afganistan and using them to impress the local kids. 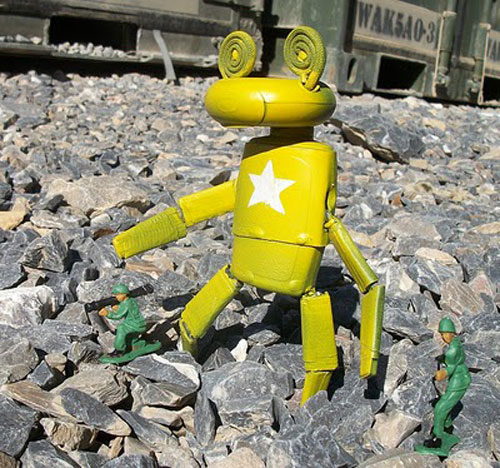 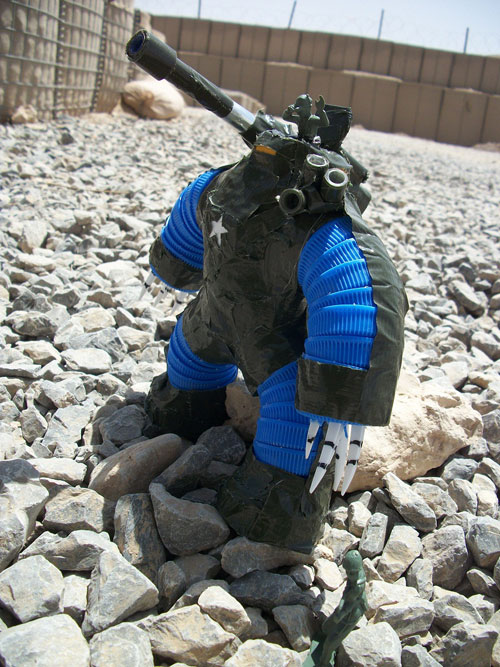 Rupert makes these things when he’s bored, in this interview he says he’ll pull out his knife and start working away on his plastic creations in spare moments while he waits for the artillery cannon he works on to be put into action. But it’s not something solely for his benefit.

“When we are outside the wire, and interact with the Afghan locals, I take some of my little creations, and you see the eyes open wide on these little kids. I think I put in my humble talent to some use if it means winning hearts and minds of the Afghan people.”

“Out here, it’s 4th world, not even 3rd world. Kids are corrupted at a very young age. Boys are brainwashed to be soldiers, girls to be literally work horses. The kids we see out on patrol have never seen a He-Man or DCUC Batman. Afghan children play with rocks and dirt, which is never in shortage.”

You can buy a few of them on Etsy, and see a bunch of his previous creations on Flickr.

The movies in the Transformers franchise are a car company’s dream, with the third installment due out soon, other companies are looking to get a piece of the produce placement pie.

I give you, the Nascar Transformer… If I were an ice sculptor, a talented ice sculptor, I don’t know how high on the list I’d put “carve a giant autobot” – but having seen this, it’d be up there. 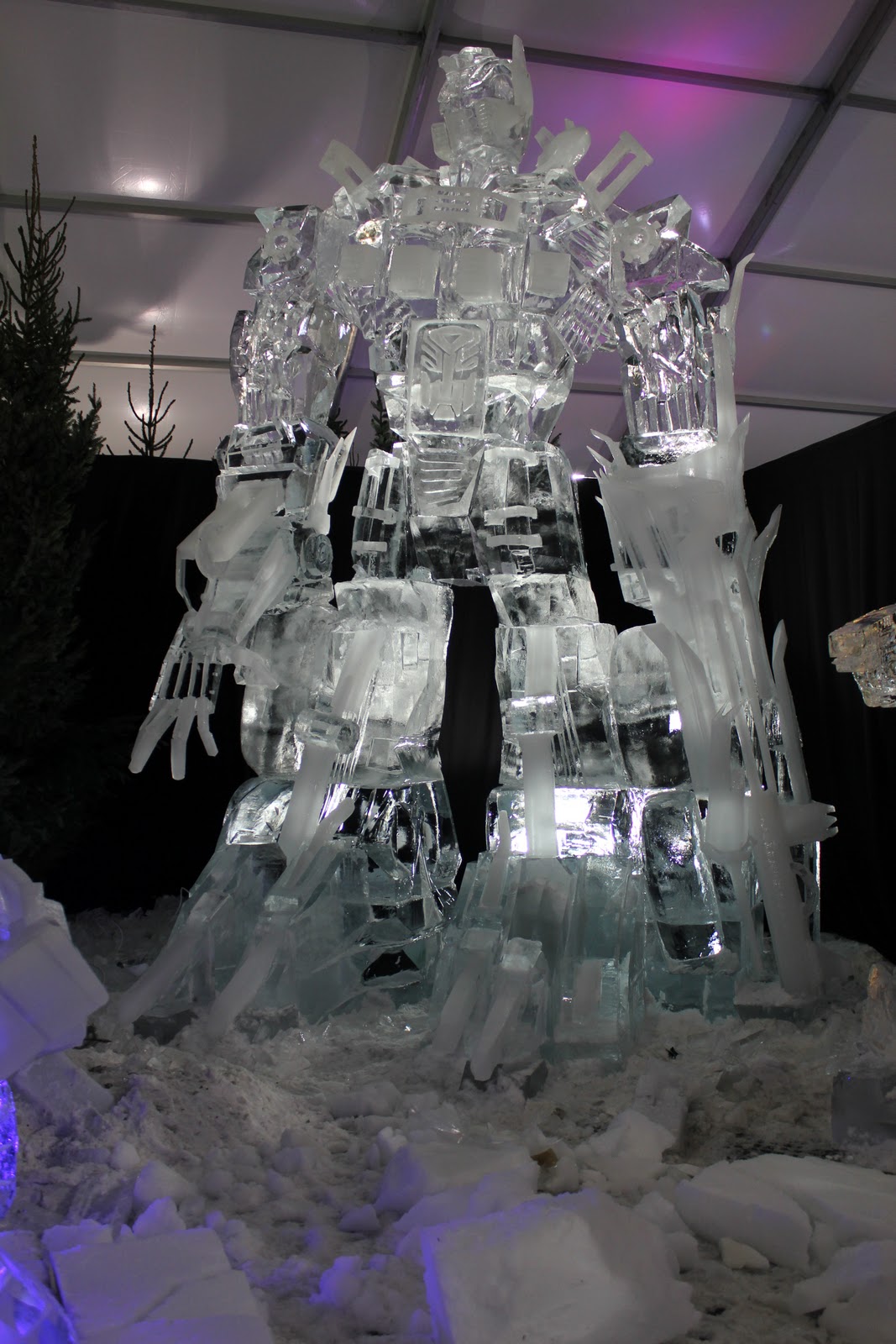 What if Optimus Prime hit earth before the combustion engine was invented. He’d be a steam train of course.

This guy from Encline Designs makes custom Transformers and other toys. Pretty awesome.

I would really like to slip these windows into a church. Just to see how long it would take an eagle eyed child to notice. Given the amount of time I spend looking at the windows, while preachers studiously try to make eye contact with me, I reckon it’d take less than five minutes. If you’ve ever wanted proof that the people of Facebook will get behind a good cause then look no further than this group – My sister said if I got 1,000,000 fans she would name her baby Megatron – it now has over 1.3 million fans. No word yet on whether the sister will come through on the deal. Here’s hoping.

These cardboard box Transformers costumes will not effectively disguise you as a robot. But they’re cool.

I just designed a shirt. The idea came from a tangent on my last post.

I’ve been thinking a little bit about why I am convinced of the truth of Christianity a little since Mark Driscoll’s Jesus based apologetic made me question the way I approach “theism”, and Dave’s thoughful series on atheism concluded with Jesus as a foundational reason for rejecting atheism and adopting Christianity (not theism). I tried my hand at defending Christian belief on the basis of the historicity of Jesus and the veracity of claims made about him in the Bible here.

I’ve been thinking that while my adherence to Christianity as an accurate representation of a monotheistic God hinge on Jesus and his claims – there are other reasonable reasons to believe in a God who creates and sustains the universe.

The Fine Tuned Universe argument, the idea that conditions in the universe are extraordinarily balanced and complex, has its detractors. It has its scientific explanations – like the anthropic principle (that things could only be this way for life to exist – ie that life couldn’t possibly have happened in any other way). And it has its Christian proponents – like William Lane Craig.

I find it pretty compelling. Atheists using a frame work of naturalism find it mind blowing but explainable. And once they have an explanation they don’t need a cause. Because to add a creator to the mix would create something else that needs a creator. I think it’s an odd paradox that none of their equations of chance – including the whole multiverse concept – ever factor in a universe with an omnipotent God. Surely if multiple universes exist then each one has a probability of developing a God powerful enough to destroy all the other universes? Monotheism is the natural outcome of this school of thought.

On a side note – I want to ask Dawkins or any evolutionary biologist a question. Given infinite time will humans eventually evolve into shapeshifting aliens? That would seem, based on Transformers, to be the evolutionary pinnacle.

I’m happy to accept much of the science of evolution. But I wonder what happens when you do that and remove God from the picture. What does the end point look like? How long before we can fly?

The quote below is the reason for this post. And it seems particularly dumb. To me the idea that there are a lot of things in the universe that can kill us, and want to, is a case for an intervening creator, not a case against…

I want to do a fast tirade on stupid design. Look at all the things that just want to kill us…
Most places in the universe will kill life instantly – instantly! People say that the forces of nature are just right for life. Excuse me? Look at the volume of the universe where you can’t live. You will die instantly. That’s not what I call the garden of Eden.
…
This is all stupid design. If you look for what it intelligent, yeah you can find things that are really beautiful and clever – like the ball socket of the shoulder – there are a lot of things you can point to. But then you stop looking at all the things that confound that revelation. So if I came across a frozen waterfall and it just struck me for all its beauty, I would then turn over the rock and try to find a millipede or some kind of deadly newt, put that in context, and realize of course that the universe is not here for us – for any singular purpose.

So now nature is not right for life which makes life less probable, not more, and the atheists embrace it. I would have thought the greater the improbability of life the greater the case for God. Am I missing something? The fact that bad stuff happens naturally – and that there are things out there that can kill us fits with Christian doctrine rather than contradicting it…

I love the part of the quote that equates the concept of Eden – a safe haven – with the whole universe. It’s just dumb.

These arguments come from this video – and I found them here. Be warned – this video contains a frame depicting abnormal and aborted fetuses.

Even without the specifics of Jesus I find the argument for a creator much more compelling than a naturalistic understanding of things.