Izaac, in reflecting on the Engage conference he was at recently, mentioned what he sees as a push towards redemption in our doctrine of creation. I think it’s probably a helpful corrective, I have been accused of having an “anaemic doctrine of creation“1 in the past. Pretty much any time I said anything about why I think caring for the environment is a secondary issue (compared to preaching the gospel).2 I’m not suggesting it has no value, just that it only has value when it aids our primary purpose.

The danger of correctives is that they push to far. As Zack points out, and Mikey reiterates. Here’s the quote from Izaac:

“But I’m concerned when redeeming creation is starting to get equal billing with the gospel. The balance hasn’t tipped yet, but it ain’t too far away. At the moment its simply good critiquing of the church.”

This issue nicely fits in with my post about work, rest and play, and my post about my ethical framework – and the “redemption angle” is probably the best articulation of the difference between my approach on the issue of gay marriage, and Mark Baddeley and Tim Adeney’s corrections (and I think, by extension, Oliver O’Donovans – who I really need to read).

Here’s my doctrine of creation in analogy form (from a comment on Mikey’s post). As you’d expect, it takes a pretty utilitarian approach to “redeeming creation” where the end is not the work in itself, but the work of the gospel.

I like to think of culture/the world as a sinking ship, Robinson Crusoe style, where any redemption is pulling stuff off the ship and waiting for a new one to come. I think sitting around on the ship polishing floors (or rearranging the deck chairs on the Titanic) is a little pointless in the bigger scheme of things… Even though the ship will eventually be refloated.

I think the concept of “redemption” is more helpful, and more often related, to getting people off the sinking ship as opposed to cleaning up the sinking ship. And I think, to stretch the analogy, that cleaning the ship is only useful so long as it clears a pathway to make it easy for other people to get off.

I think the restoration, Romans 8 style, is a complete renewal of Creation not just a renovation where God fixes the bits we’ve missed. It seems to me that the planet gets a refresh regardless of our efforts – while people don’t get that same second chance, so that’s where we should be focusing our energy (unless you’re a universalist, in which case being a tree hugging hippy is equally morally valid).

I guess my sinking ship analogy almost perfectly personifies a retrieval ethic. And I’m ok with that.

Also, this PDF study guide to Christian ethics from AFES is pretty good.

1Also, it’s very interesting how closely my conversation with one “David Walker” paralleled my conversation with one “Mark Baddeley” – perhaps they are the same person. Separated by oceans.
2And nothing proves the point about the danger of being a corrective like the way I put forward those views in that pretty ugly series of posts. While I agree mostly with what I said still – there was a bit of nuance missing. I don’t think either/or dichotomies are a helpful way of approaching these issues – I think primary/secondary concerns is probably better – and acting for a secondary concern can often aid in a primary concern, but should never supplant, or contradict, it. That’s my theory.

Al has done some thinking about the concept of play. He wrote a good essay on the subject of play where he introduces his view that play can not, by its nature, contain utility. He reiterated that in the comments of my post on utility. Given my views on utility it seems likely that I’ll disagree on his conclusion. And I do. Here’s why, in Venn diagrams.

My friends Kutz and Simone differ on whether we should look forwards, or backwards, when approaching such questions of ethics. So I’ve covered both.

I think play is of most value the more overlaps that occur in these diagrams. Rather than of least… 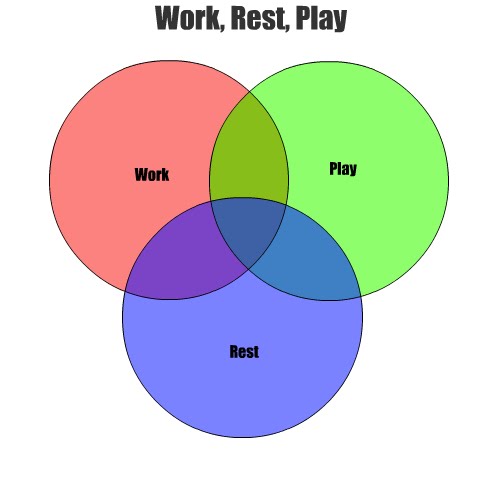 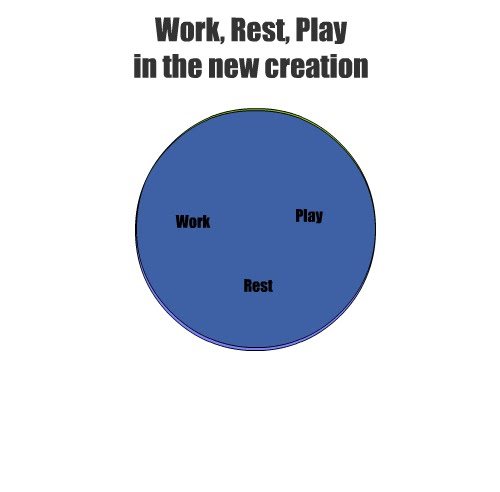 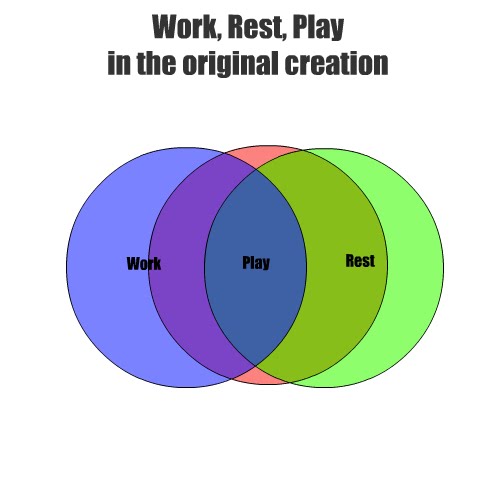 While I think the externalities in the current situation are of merit, for example, I enjoy sleep (which is just rest) and playing computer games (which is just play). But I enjoy sport more – which is fun (play) and exercise (work). I think areas of overlap are of greater value as rest. We intrinsically know this in our approach to finding a job. We look for, and get the most out of, jobs that are a combination of work and rest (something menial where we can let our minds focus on things that give us pleasure), or work and play (something that we actually enjoy), otherwise we need to be financially compensated in order that we can enhance our experience of play and rest outside of work.

So if I take pleasure from cooking and end up with a meal for myself and others at the end of an enjoyable, and restful, process, I think that’s better. If I give that meal to somebody else it also nicely fits in with my gospel utilitarian framework.

I think taking the things that give us rest, and using them for the service of others, is pretty much the best way to rest.