Someone recently pointed out that it has been a while since I actually wrote anything about myself and life in Townsville. So here’s an update for those of you out there who care. For those of you who don’t just scroll up and down and marvel at the snazzy new design. I’ve been in Townsville for 7 months and one day today. If I was a gestating foetus I’d probably be able to survive outside the womb if I was born after that period – and that’s an apt analogy for life in Townsville. I think I could survive life in Townsville for an extended period of time now – and I wouldn’t even need to be kept in one of those fancy humidicrib cradle things that they use for premmie babies. Summer is approaching pretty rapidly and that’s a little scary, but the Townsville Bulletin recorded this has been the coldest October on record. This is the latest in really bizarre weather patterns that have been occurring up here since I moved. It rained heaps in the middle of the year – which it’s never meant to do. There was a cyclone and an extended wet season. The stingers that were meant to arrive a few weeks ago still aren’t plaguing the beaches. I guess I’m changing the face of North Queensland. Outside of the weather (or inside) things are good. Work, church and home continue to be enjoyable and challenging and all the things those respective areas are meant to be. Nothing overly newsworthy has happened in any of those areas so I won’t bore you with any details.
I’m really enjoying spending time with Robyn. We made an appearance in the Townsville Bulletin a couple of weeks ago after attending the spectacular Townsville Enterprise North Queensland Tourism Awards – my media releases promoting the event earned me a pot of flowers from my CEO – they are now slowly wilting on my desk. Here’s the photo for your viewing pleasure. 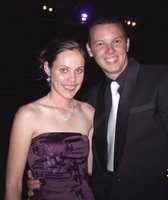 Other than that there’s not much else happening. Other than some cool visitors heading up this way. Aaron and Donna are coming up this weekend which will be fun. I’m looking forward to getting up to mischief with my former partner in crime. Steve has just told me that he’s also coming up to visit next week which is pretty exciting. If anyone else wants to come up and needs convincing you should check this website out.

So there’s my update. That’s post number 98, I’m still trying to figure out what I’m going to do to mark post number 100 – maybe I’ll release a book version of my blog.

9 Comments → Life in the tropics