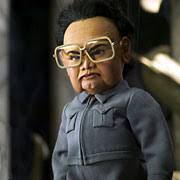 It’s all a bit Steve Jobs-esque – rumours of his demise are said to be exaggerated. One wonders if the obituary for Kim Jong Il will include references to his zeitgist reaching character from Team America. Or if, in the event of his timely demise, the puppet masters in North Korea resort to imitating the movie and installing a puppet as the country’s new leader.
Once again this post was generated based on a suitably lame pun.

Well, I was going to do my song title challenge today but in an annoying technological hiccup I lost my…