California is famous for movies, a governor with a Conan sword and a penchant for acrostic missives, and banning gay marriage with proposition 8.

One of my problems with the vocal Christians who protest to protect the sanctity of “marriage” is the myopic approach they take. It’s all well and good to campaign for marriage to be protected for one man and one woman (a stance I actually feel much sympathy with – though I don’t see marriage as a sacrament owned by the church) – but what about the bit where it’s one flesh. For life.

A Californian man has taken the marriage protection movement to its logical extent. He’s seeking (satirically) to ban divorce. 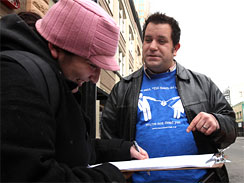 Marcotte reasons voters should have no problem banning divorce.

Marcotte said he has collected dozens of signatures, including one from his wife of seven years. The initiative’s Facebook fans have swelled to more than 11,000. Volunteers that include gay activists and members of a local comedy troupe have signed on to help.

Marcotte is looking into whether he can gather signatures online, as proponents are doing for another proposed 2010 initiative to repeal the gay marriage ban. But the odds are stacked against a campaign funded primarily by the sale of $12 T-shirts featuring bride and groom stick figures chained at the wrists.

There’s some interesting anecdotal evidence, and some reasonable studies that link divorce with social problems, developmental problems and property prices.…

Honestly, I thought long and hard about that title… because it’s semi racist – but it actually really epitomises the…

I love satire. Of most colours. I like it when Christians satirise our own culture, and when non-Christians do it…