I think the way we, as people, choose to define ourselves is telling. So I often look at people’s profiles online with interest.

I, for example, put “A Christian” as first on the list. I am many more things, but I primarily self identify as a Christian, not a husband, son, brother, or blogger.

Atheists, upon occasion, have expressed their displeasure that Christians want them to define themselves by their non belief – and yet in the blogosphere they proudly identify that way with a big red A.

Some gay people I’ve spoken to prefer not to be identified by their sexual preferences, while others join together to form lobby groups.

I think Christians should, when defining their beliefs and identities, start off talking about Jesus. And this, more than anything else, is the problem I have with “Answers in Genesis”. They should be called “Answers in Jesus”, or “Answers from Jesus”… and they’re not.

After trying to explain why I think it’s a problem that AIG evangelise using pseudo science I conducted a little experiment. I went to the AIG homepage and searched it for “Jesus”… the little search box on Firefox came back “Phrase not found”… Here is a screenshot… 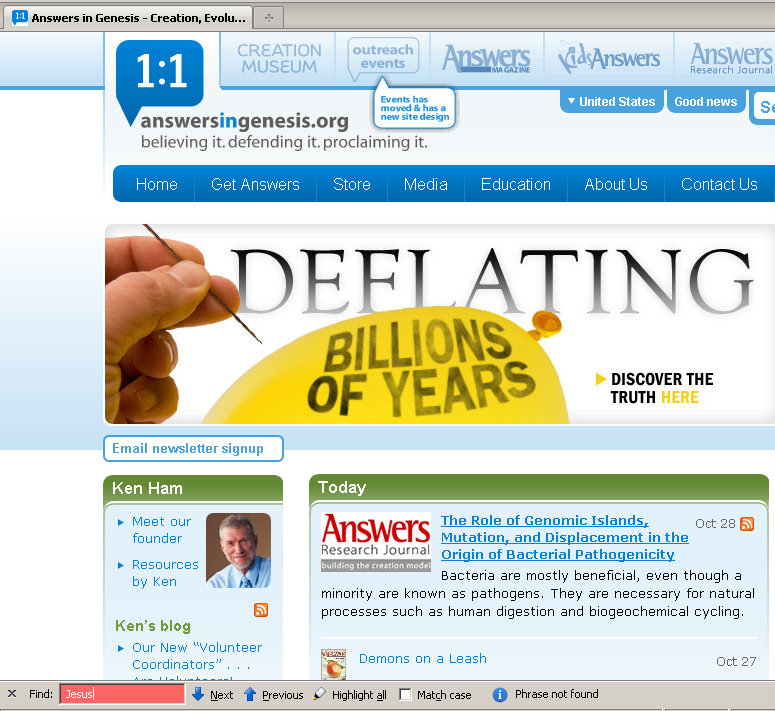 UPDATE: In case you, like a commenter below, think my little search trick is misleading – I give you one other piece of evidence that Answers in Genesis overplay the significance of their understanding of Genesis when it comes to the gospel…

Fairy Tales and fantasies have been the staple fictional diet of children for many years. I caught the Brothers Grimm…

God has been getting a bit of publicity lately – and not much of it is good. This is likely…