I don’t know if this will become a regular feature… but it might. I’ve been thinking a bit about the intersection between blog life and real life. And these thoughts were stirred by Izaac when, in the comments of a recent post, he revealed how he “knows” me.

Of all the bloggers in the blogosphere (except Paul, but he never updates) I have known Izaac the longest (again, unless you count dad’s design blog… I guess…).

Here’s the story (as told by Izaac)…

“I grew up with Nathan in Maclean. He introduced me to Phantom comics – which I borrowed regularly for about 6 months until I lost interest. We had games of touch football or cricket every week after church in the church grounds until they installed a drain and a kid’s play area, which put an end to that. As Nathan was the year above me at school I think we bonded more as we got older – including after his family moved to Mitchelton. A select few of us have kept in touch from those days – I think Nathan may have trouble making new friends (he’s gonna love that one). I randomly appeared at his 21st birthday because though living in Sydney I was doing a radiography prac at the Gold Coast. I helped build the steps in his parentals front yard as well as wheelbarrowing in woodchips into the garden. On the said mentioned trip he introduced me to ‘black books’ which I didn’t find particularly funny. He was MC at my wedding. I returned the favour. S and I are about to visit Nathan and Robyn in Townsville. He couldn’t convince me to come to Brisbane to do Bible College together. He will name his first born son after anyone but me.”

I remember it quite differently.

Izaac was a scrawny little kid with an unnatural ability with a football. Sadly. He was, and is, a St George fan. We used to go camping at Brooms Head at the same time as his family, and we would play touch football together. Though when Beach Mission was on he hung out with the fun teens playing football and I had to go to the boring teens program where they talked about the Bible. I was jealous.

One of my finest memories of Izaac, well, my first memorable memories, was superimposing his head onto a scanned version of a St George player’s head. This picture still sits, framed, in his lounge room. I know that because it was there when we visited last year.

Izaac lived four doors up from Paul on Clarence Street in Maclean. I used to wish I lived on Clarence Street. But it was a big hill. And it would have sucked to walk up it every day on the way home from primary school.

I found a video of Izaac last year when I was making a video for dad’s 50th and another one for little sister number two’s 21st. I will perhaps track it down and post it. On that video Izaac stole my video camera and ran away with it. He was cruel at times. But he was funny so I forgave him. And he once borrowed my Backstreet Boys CD. Yes. I owned a Backstreet Boys CD. Yes. It is something I feel ashamed about.

Here’s a photo of Izaac MCing at my wedding. He’s the one with the microphone. 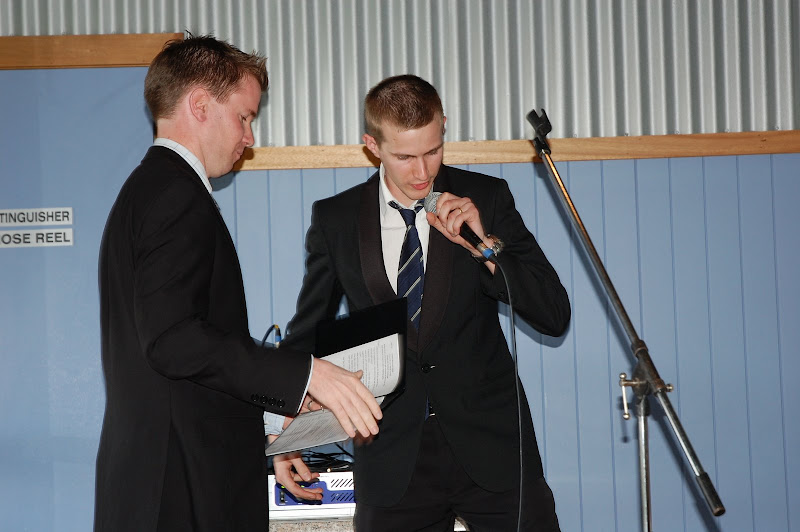 On our visit to Sydney last year we managed to coincide our trip with one of his preaching engagements for the year. He was good. I think he’ll make a very capable minister, though I’m sad I couldn’t convince him to come to Brisbane for college. We had a good time with him, and his wife, who on the internet is known as S (I know her real name. That’s how close we are) we showed them bits of Sydney that I remembered from childhood – like the Mediterranean dessert place in Croydon Park, and Reverse Garbage. Then I went to a football game with Izaac and stood with the crazy St George army while they insulted Rabbitohs fans.

If you have any questions about Izaac feel free to ask me about him. I consider myself an expert on the topic.

Friend Izaac now has a blog. He has put a link to it in his gmail status so I assume…

2 thoughts on “Knowing me, knowing you… the Izaac Edition”