I’m finding all sorts of fun quotes playing around with primary sources. Here’s a quote from Aristotle’s Rhetoric about use of emotion in court proceedings – with a mention of the Areopagus, the council Paul appeared before in Athens in Acts 17:

“The arousing of prejudice, pity, anger, and similar emotions has nothing to do with the essential facts, but is merely a personal appeal to the man who is judging the case. Consequently if the rules for trials which are now laid down some states — especially in well-governed states — were applied everywhere, such people would have nothing to say. All men, no doubt, think that the laws should prescribe such rules, but some, as in the court of Areopagus, give practical effect to their thoughts and forbid talk about non-essentials. This is sound law and custom. It is not right to pervert the judge by moving him to anger or envy or pity — one might as well warp a carpenter’s rule before using it.”

Here’s a picture of Mars Hill. 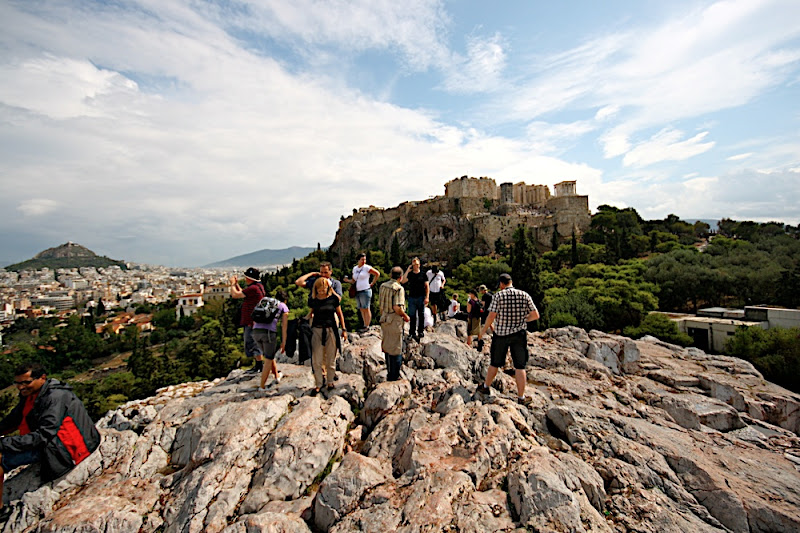 Image Credit: Me, from our trip to Greece

Now the ever reputable Professor B. Winter tells us (that is, his students) that the Areopagus:

a) did not actually meet on top of Mars Hill (speculative – based largely on its current shape and size (who knows how big it was 2,000 years ago), and the number of people in the Areopagus.
and b) had a function to perform as the gatekeepers for the gods of Greece, the Areopagus basically had a set of rules to govern what gods could and couldn’t be accepted into Greece, and Paul’s presentation in Acts 17 is said to meet those parameters…

It’s interesting that they had a reputation for only talking about essentials, from hundreds of years before Paul, and yet the members of the Areopagus invited him to speak.

“19 And they took him and brought him to the Areopagus, saying, “May we know what this(AH) new teaching is that you are presenting? 20 For you bring some strange things to our ears. We wish to know therefore what these things mean.”

It’s also funny how Luke’s view of the Athenians, and possibly, by context and extension, the Areopagus, differs from Aristotle’s:

21 Now all the Athenians and the foreigners who lived there would spend their time in nothing except telling or hearing something new.”

Some people, like the Hives, hate to say “I told you so”, but not me. So now that Mars Hill…

I’ve just about had enough talking about Mark Driscoll for a while – so I’m sure you have too. But…

Mars Hill Church has been doing some big stuff to help churches in Haiti recover from the earthquake. Mark Driscoll…