Irenaeus studied under Polycarp, and then under Justin Martyr. A pretty enviable education. He rejected the latter’s fusion of philosophy and Christianity.

Despite serving in a church in the Latin West, Irenaeus was a Greek, born in Smyrna, his work was written in Greek, but the originals have been lost and the oldest copies are Latin translations. 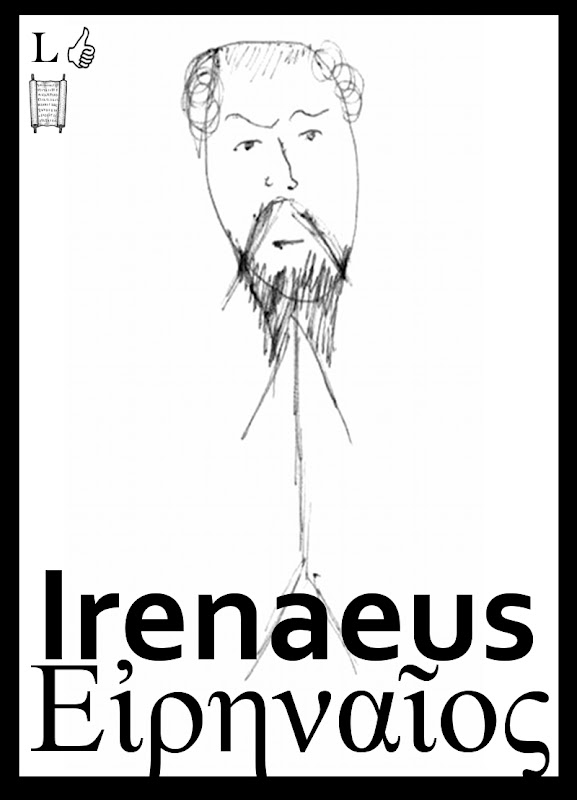 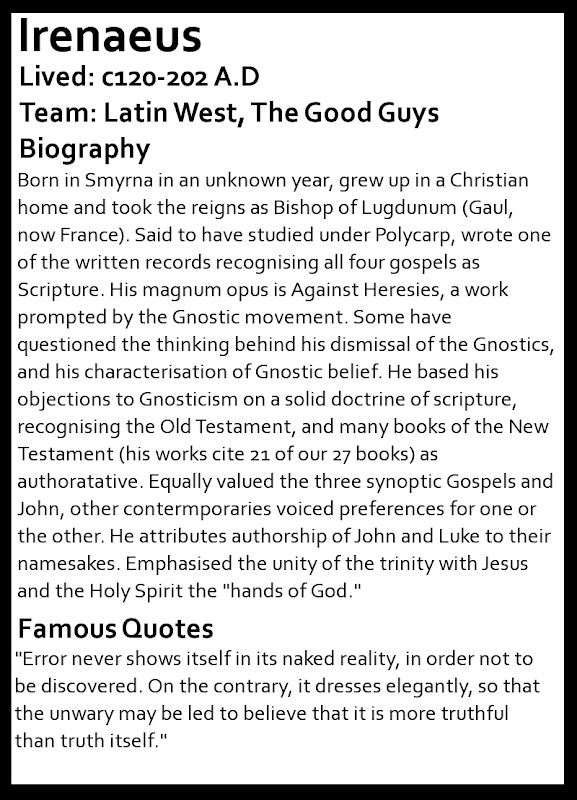 His writings have been described as almost unintelligible to the modern reader. Here’s what someone wrote in the introduction to Book 1 of his most famous work, Against Heresies:

“Not a little of what is contained in the following pages will seem almost unintelligible to the English reader. And it is scarcely more comprehensible to those who have pondered long on the original. “

Irenaeus even makes an apology for his own writing in the introduction.

“Thou wilt not expect from me, who am resident among the Keltæ, and am accustomed for the most part to use a barbarous dialect, any display of rhetoric, which I have never learned, or any excellence of composition, which I have never practised, or any beauty and persuasiveness of style, to which I make no pretensions. But thou wilt accept in a kindly spirit what I in a like spirit write to thee simply, truthfully, and in my own homely way; whilst thou thyself (as being more capable than I am) wilt expand those ideas of which I send thee, as it were, only the seminal principles; and in the comprehensiveness of thy understanding, wilt develop to their full extent the points on which I briefly touch, so as to set with power before thy companions those things which I have uttered in weakness. “

He refuted the Gnostics on the basis that the Church had carried true beliefs from the time of Jesus through to his present time, here’s his summary of Christian belief:

“The Church, though dispersed through our the whole world, even to the ends of the earth, has received from the apostles and their disciples this faith: [She believes] in one God, the Father Almighty, Maker of heaven, and earth, and the sea, and all things that are in them; and in one Christ Jesus, the Son of God, who became incarnate for our salvation; and in the Holy Spirit, who proclaimed through the prophets the dispensations of God, and the advents, and the birth from a virgin, and the passion, and the resurrection from the dead, and the ascension into heaven in the flesh of the beloved Christ Jesus, our Lord, and His [future] manifestation from heaven in the glory of the Father “to gather all things in one,” and to raise up anew all flesh of the whole human race, in order that to Christ Jesus, our Lord, and God, and Saviour, and King, according to the will of the invisible Father, “every knee should bow, of things in heaven, and things in earth, and things under the earth, and that every tongue should confess” to Him, and that He should execute just judgment towards all; that He may send “spiritual wickednesses,” and the angels who transgressed and became apostates, together with the ungodly, and unrighteous, and wicked, and profane among men, into everlasting fire; but may, in the exercise of His grace, confer immortality on the righteous, and holy, and those who have kept His commandments, and have persevered in His love, some from the beginning [of their Christian course], and others from [the date of] their repentance, and may surround them with everlasting glory.

As I have already observed, the Church, having received this preaching and this faith, although scattered throughout the whole world, yet, as if occupying but one house, carefully preserves it.” – Against Heresies, Book One, Chapter X

Which stands the test of time.

Polycarp was a cool dude. The Martyrdom of Polycarp is all about his death. Which is legendarily legendary. The document…

So, to make understanding Early Church History, and figures therefrom, we refer to them as being from the Greek East,…