A trading card for an inanimate object. All the great series of cards have them (except any of the NRL cards I collected as a kid. I also collected Phantom cards (and comics). I think they’re under the house at mum and dad’s.

Justin Martyr’s Apology is one of a suite of Apologies written to Roman Emperors seeking improved treatment of Christians. 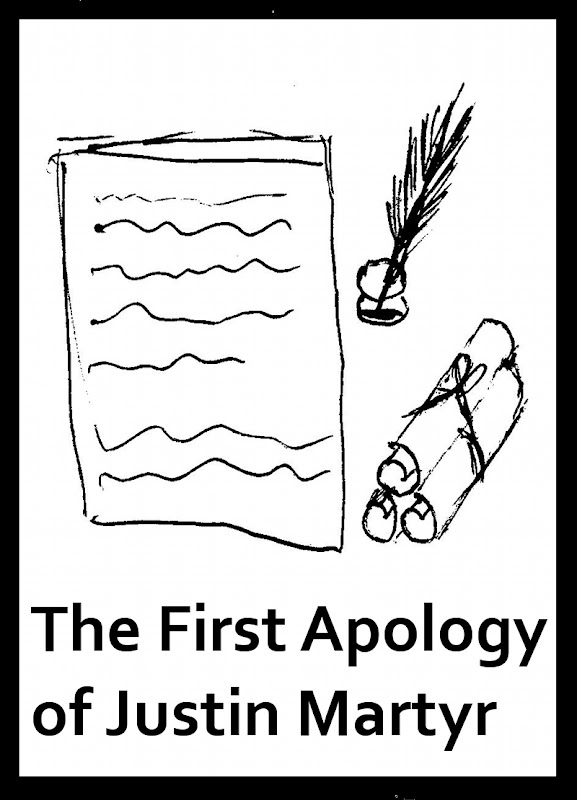 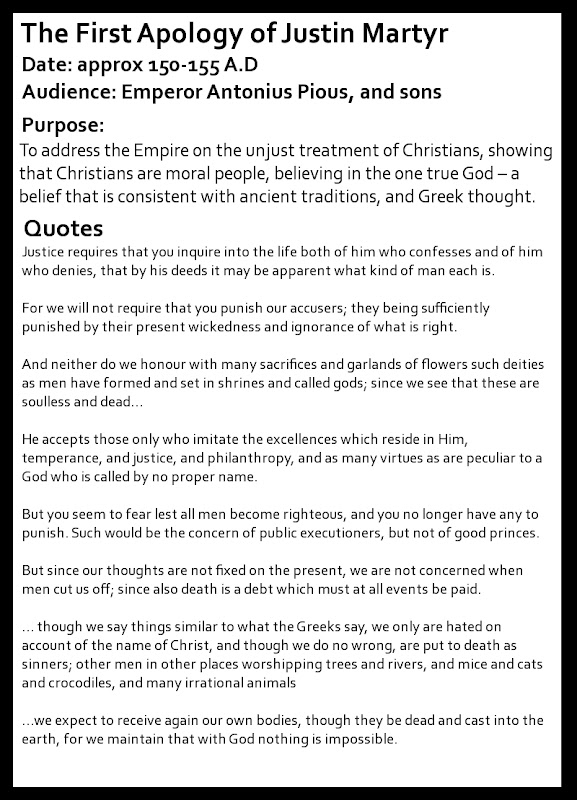 Here’s an outline of his argument (quite summarised)…

Justin opens with a call for justice, because it is unjust to punish people for the name that they take rather than their deeds. Some had been denying the name of Christ, but keeping the deeds, and escaping punishment. Justin says his document will provide an overview of Christian beliefs for Caesar to put to the test. Next he deals with the charges of atheism – concluding that Christians believe the Roman gods exist, they just think they are wicked demons.

Christians should be punished if they do wrong, but being a Christian itself isn’t wrong. He says that while Christians can deny the name of Christ (by telling a lie) their lives will still show who they are, and that God will judge the wicked, an idea Plato had already suggested. Everybody knows idols are dumb because they’re made by man.

Christians believe that God provides all things, and requires only virtuous living in return. He says that if Christians pursued a seditious earthly kingdom they wouldn’t die for the cause, but rather lie for the cause. He says that Christians are allies in the moral living cause. He appeals to Caesar’s sense of justice and commitment to wisdom. Then he outlines the gospel, and the crucified Christ’s place in the created order (second to the father, with the Spirit third), and shows that the gospel changes lives. He examines Christ’s teaching, pointing to his teaching about the state (render unto Caesar). Then covers the feasibility of the resurrection, overlaps between Christian doctrine and philosophy, and the Old Testament, finally he talks about Christian practice in their gatherings.

Here’s how he describes his purpose (turned into dot points):

And that this may now become evident to you:

And here, to save anybody else the hassle of reading the document, are some extended quotes about things that might come up in the exam.

On Justice and the treatment of Christians

Again, if any of the accused deny the name, and say that he is not a Christian, you acquit him, as having no evidence against him as a wrong-doer; but if any one acknowledge that he is a Christian, you punish him on account of this acknowledgment. Justice requires that you inquire into the life both of him who confesses and of him who denies, that by his deeds it may be apparent what kind of man each is.

But if no one can convict us of anything, true reason forbids you, for the sake of a wicked rumour, to wrong blameless men, and indeed rather yourselves, who think fit to direct affairs, not by judgment, but by passion.

For not only among the Greeks did reason (Logos) prevail to condemn these things through Socrates, but also among the Barbarians were they condemned by Reason (or the Word, the Logos) Himself, who took shape, and became man, and was called Jesus Christ; and in obedience to Him, we not only deny that they who did such things as these are gods, but assert that they are wicked and impious demons, whose actions will not bear comparison with those even of men desirous of virtue.

On idol worship as intellectually unjustifiable:

And neither do we honour with many sacrifices and garlands of flowers such deities as men have formed and set in shrines and called gods; since we see that these are soulless and dead, and have not the form of God (for we do not consider that God has such a form as some say that they imitate to His honour)

For why need we tell you who already know, into what forms the craftsmen, carving and cutting, casting and hammering, fashion the materials? And often out of vessels of dishonour, by merely changing the form, and making an image of the requisite shape, they make what they call a god; which we consider not only senseless, but to be even insulting to God, who, having ineffable glory and form, thus gets His name attached to things that are corruptible, and require constant service. And that the artificers of these are both intemperate, and, not to enter into particulars, are practised in every vice, you very well know; even their own girls who work along with them they corrupt. What infatuation! That dissolute men should be said to fashion and make gods for your worship, and that you should appoint such men the guardians of the temples where they are enshrined; not recognising that it is unlawful even to think or say that men are the guardians of gods.

On the way to serve God (good works)

Justin goes pretty close to suggesting that salvation is dependent on works.

“He accepts those only who imitate the excellences which reside in Him, temperance, and justice, and philanthropy, and as many virtues as are peculiar to a God who is called by no proper name.”

“And we have been taught that He in the beginning did of His goodness, for man’s sake, create all things out of unformed matter; and if men by their works show themselves worthy of this His design, they are deemed worthy, and so we have received— of reigning in company with Him, being delivered from corruption and suffering.”

“And more than all other men are we your helpers and allies in promoting peace, seeing that we hold this view, that it is alike impossible for the wicked, the covetous, the conspirator, and for the virtuous, to escape the notice of God, and that each man goes to everlasting punishment or salvation according to the value of his actions.”

On Christ as more effective than human law in restraining the natural human inclination towards sin:

“For the restraint which human laws could not effect, the Word, inasmuch as He is divine, would have effected, had not the wicked demons, taking as their ally the lust of wickedness which is in every man, and which draws variously to all manner of vice, scattered many false and profane accusations, none of which attach to us.”

On Hell as a better motivator for good living:

For those who, on account of the laws and punishments you impose, endeavour to escape detection when they offend (and they offend, too, under the impression that it is quite possible to escape your detection, since you are but men), those persons, if they learned and were convinced that nothing, whether actually done or only intended, can escape the knowledge of God, would by all means live decently on account of the penalties threatened, as even you yourselves will admit.

On Christian hope for heavenly kingdom:

“For if we looked for a human kingdom, we should also deny our Christ, that we might not be slain; and we should strive to escape detection, that we might obtain what we expect. But since our thoughts are not fixed on the present, we are not concerned when men cut us off; since also death is a debt which must at all events be paid.”

On the reasonable nature of Christian belief:

“What sober-minded man, then, will not acknowledge that we are not atheists, worshipping as we do the Maker of this universe, and declaring, as we have been taught, that He has no need of streams of blood and libations and incense; whom we praise to the utmost of our power by the exercise of prayer and thanksgiving for all things wherewith we are supplied, as we have been taught that the only honour that is worthy of Him is not to consume by fire what He has brought into being for our sustenance, but to use it for ourselves and those who need, and with gratitude to Him to offer thanks by invocations and hymns for our creation, and for all the means of health, and for the various qualities of the different kinds of things, and for the changes of the seasons; and to present before Him petitions for our existing again in incorruption through faith in Him. Our teacher of these things is Jesus Christ, who also was born for this purpose, and was crucified under Pontius Pilate, procurator of Judæa, in the times of Tiberius Cæsar; and that we reasonably worship Him, having learned that He is the Son of the true God Himself, and holding Him in the second place, and the prophetic Spirit in the third, we will prove. For they proclaim our madness to consist in this, that we give to a crucified man a place second to the unchangeable and eternal God, the Creator of all; for they do not discern the mystery that is herein, to which, as we make it plain to you, we pray you to give heed.”

On the changes the gospel brings:

And thus do we also, since our persuasion by the Word, stand aloof from them (i.e., the demons), and follow the only unbegotten God through His Son — we who formerly delighted in fornication, but now embrace chastity alone; we who formerly used magical arts, dedicate ourselves to the good and unbegotten God; we who valued above all things the acquisition of wealth and possessions, now bring what we have into a common stock, and communicate to every one in need; we who hated and destroyed one another, and on account of their different manners would not live with men of a different tribe, now, since the coming of Christ, live familiarly with them, and pray for our enemies, and endeavour to persuade those who hate us unjustly to live conformably to the good precepts of Christ, to the end that they may become partakers with us of the same joyful hope of a reward from God the ruler of all. But lest we should seem to be reasoning sophistically, we consider it right, before giving you the promised explanation, to cite a few precepts given by Christ Himself. And be it yours, as powerful rulers, to inquire whether we have been taught and do teach these things truly. Brief and concise utterances fell from Him, for He was no sophist, but His word was the power of God.

On Christianity and Philosophy


On the “bodily hope” of the new kingdom, and the danger of punishment

For reflect upon the end of each of the preceding kings, how they died the death common to all, which, if it issued in insensibility, would be a godsend to all the wicked. But since sensation remains to all who have ever lived, and eternal punishment is laid up (i.e., for the wicked), see that you neglect not to be convinced, and to hold as your belief, that these things are true.

…and what you repute as oracles, both of Amphilochus, Dodana, Pytho, and as many other such as exist; and the opinions of your authors, Empedocles and Pythagoras, Plato and Socrates, and the pit of Homer, and the descent of Ulysses to inspect these things, and all that has been uttered of a like kind. Such favour as you grant to these, grant also to us, who not less but more firmly than they believe in God; since we expect to receive again our own bodies, though they be dead and cast into the earth, for we maintain that with God nothing is impossible.

Polycarp was a cool dude. The Martyrdom of Polycarp is all about his death. Which is legendarily legendary. The document…

So, to make understanding Early Church History, and figures therefrom, we refer to them as being from the Greek East,…