This is just silly. A bunch of atheists at a convention decide to have a little fun and “debaptise” themselves with a hairdryer and the Internet just about breaks. A bunch of fencesitters agnostics and Christians have condemned the action as cultic and proof that atheism is a religion (see the comments on this Gizmodo article, or this Neatorama one, here’s the coverage from the Friendly Atheist (and part two)). It’s a joke people. A joke. Thankfully, Fox News is on the job… reporting in an unbiased and completely level headed manner.

“American atheists lined up to be “de-baptized” in a ritual using a hair dryer, according to a report Friday on U.S. late-night news program “Nightline.”

Leading atheist Edwin Kagin blasted his fellow non-believers with the hair dryer to symbolically dry up the holy water sprinkled on their heads in days past. The styling tool was emblazoned with a label reading “Reason and Truth.”” 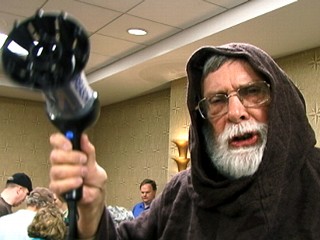 The guy doing the “debaptising,” Edwin Kagin, is one of the leading lights of the new atheist movement. He likes to call Christian parenting “child abuse”… but this Nightline story has been way overblown.

“Standing at a podium wearing a long brown monk’s robe, Kagin read with the oratorical skill of a preacher from a set of pages in his hand and invited participants to come forward to be de-baptized.

He recited a few mock-Latin syllables, to the audience’s amusement. An assistant produced a large hairdryer, labeled “Reason and Truth,” and handed it to Kagin. The man who’d elected himself to be de-baptized stood before him. Kagin turned on the hairdryer, blowing the hot air in his face in an attempt to symbolically dry up his baptismal waters.

Atheists poke fun at baptisms in this ceremony, saying they believe their waving around a hairdryer holds the same level of magical and spiritual powers as does the baptismal ceremony.”

Funnily enough, Kagin’s son is pretty much the “enemy”…

“And then there’s this interesting twist. His own son, Steve Kagin, is a fundamentalist minister in Kansas.

Kagin said that his son claims to have a personal revelation in Jesus Christ. “I am totally unable to say that’s not true,” he said. “There are examples all through history of quite sane people who have had such experiences. I don’t think it is but I’m not going to say it isn’t.””

This is a bit of a beat up. And it’s giving a little piece of attention seeking way more attention than it deserves.

1 thought on “Dry idea: atheists being “de-baptised” with a hairdryer”