You’ve seen the imagery – and now it’s time for the substance. If you’re carrying a few extra kilos (and trust me, I can relate) then this book should spur you on to greater physical fitness. Because we all know that when it comes to God’s love it’s not what’s inside that counts – it’s how good you look.

Chapter One of “Help Lord – The Devil Wants Me Fat: a spiritual approach to a trim and attractive body” is entitled “The Satanic Food Conspiracy!”…

Let me quote to you from the opening paragraphs.

“I don’t see how a really fat person can be a true Christian!”

Normally I ignore such remarks. We all know that being fat or skinny has nothing to do with being saved. But the brother making the statement was so sincere, I thought I’d better hear him out.

See what he’s done here. He’s disassociated himself from the heresy but then given it credence, and indeed, produce a whole book on the basis that you need to be skinny.

“Well, in Philippians 3:19, the apostle Paul speaks of those whose god is their belly. When a person is overweight it seems to me that food is his real master, not the Lord Jesus. Those extra pounds are proof he puts his stomach ahead of the Lord.”

This prompted some soul searching. Our author used to be “large.”

“Then I looked down at the rolls around my waistline. One thing was obvious – I was eating more food than I needed… Is it possible the Devil was using food to weaken the Lord’s rule over my life? Ugh, I didn’t like that idea. Probably because the answer I was getting back was a “yes.”

From what I knew of the devil, food was something he would definitely use. He’s skillful in turning good things to evil purposes… we could consider sex. Here is a beautiful thing God has given us, a drive of the organism to remind us how incomplete we are in ourselves. Just as we need a mate to make us complete in the flesh, so do we need the Lord Jesus to be complete in the Spirit… If Satan has the ability to turn God given drives and turn them to evil, why would he ignore something as vital as eating.”

Here’s the clincher for his argument (and if you read this conclusion with his sex analogy in mind you can understand why he thinks a glass of water is a satisfying start to the day).

“When we’re eating, do we think in terms of what our bodies need? No, we think of how good it tastes or how satisfying it is to stuff ourselves. That’s got to be the work of Satan. He gets us to shift our focus from eating what we NEED to eating what we WANT… Beyond that there seems to be a FOOD CONSPIRACY in our land. Fast food stands are springing up like gas stations. Household magazines are filled with colour photos of delicious pastries and desserts. Everywhere you look it’s food-food-FOOD…

“Most Christians seem to think it [their body] belongs to them; that they can do with it as they please. As a result they pollute it and defile it. We’re familiar with the usual things that defile the body: drugs, alcohol, tobacco and sex sins… But most subtle is the way the devil gets us to defile our bodies with food. Many who profess to put Christ first in their lives, deny His lordship with a knife and fork.”

No doubt Keller would enjoy this bit…

“Thus we have Christians who wouldn’t think of lying or stealing or committing adultery, unashamedly going around with bulging bellies. By this they are announcing to the world, “I’ve got another god in my life!” This is in direct violation of the First Commandment.”

The problem though, is Television. If this book were written today the problem would no doubt be all the food ads – but back in 1982 it was the breaks for “station identification”… this was an opportunity to get up to mischief. 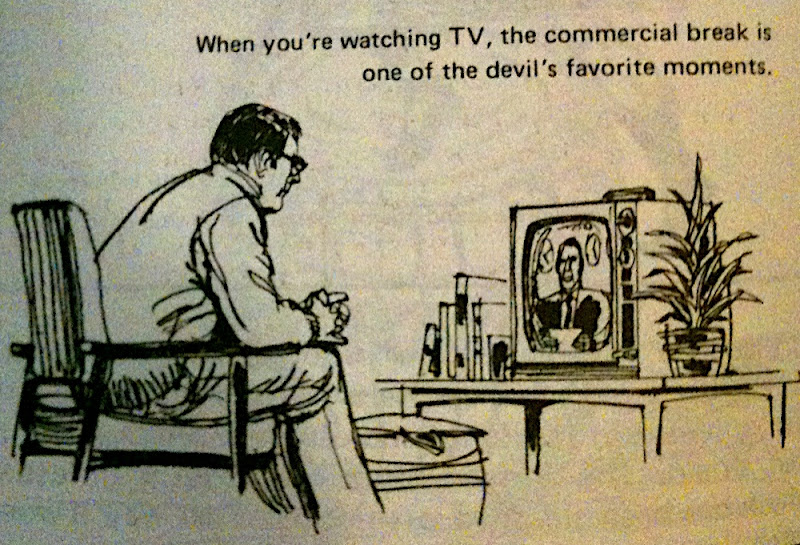 “You’re watching TV. There’s a break for station identification. Do you just sit there? No. You ease out of your chair and head for the kitchen. The refrigerator door swings open. You peer inside. Are you hungry? No. does your body need food right now? No. Do you know why you’re standing there staring like that? No…

If nothing is available from the refrigerator you may open a cupboard or two. Some more staring. If you spy something that can be eaten conveniently, you reach for it. If not, you close the door… “I don’t need it anyway” but that’s a victory of the moment. You’ll be back shortly. You win sometimes and you lose sometimes, but the final score is totaled up on the bathroom scale. If you’ve gained weight you are clearly losing the war.”

If you haven’t been offended by this pastoral method before, you probably will be now…

“The devil doesn’t care about fat. He’s concerned with what happens to Christians when they’re fat… in spite of the common notion that fat people are more jolly, the real truth is they’re often more lonely. They make good pals, but not sweethearts. As a result, fat people do a lot of pretending.”

Basically, if you know a happy fat person they’re just faking it. And Satan spends his time helping them weave a fantasy web of self-satisfied delusion…

Except, of course, for those who are fat because of glandular conditions. There’s a disclaimer at the end of this chapter. I would have put this at the front personally… the disclaimer points out that fewer than 1% of the population have this problem and that these people are not the target of this book. 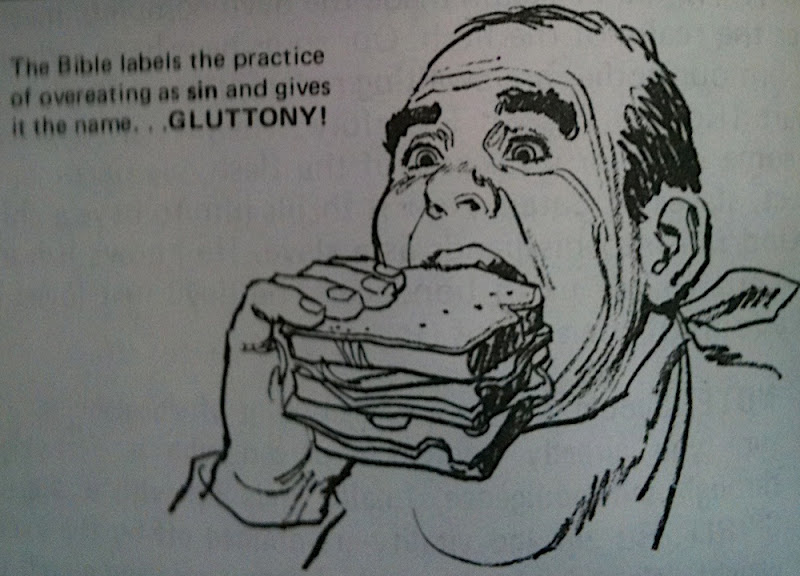 Here are the reasons Satan wants us fat.

Lest you be thinking that this issue is simply limited to your own stomach (and no doubt gluttony does lead to being overweight, as do other factors like poor nutritional education… and the types of processed foods that are part of modern diets…)…

“Some years ago a well known evangelist on the West Coast was shot and killed in a motel room by an enraged husband. The preacher was caught in bed with the man’s wife… But let me ask this: “is it any worse for the Lord to find you in bed with someone else’s wife or husband? Or to have him find you 20-50 pounds overweight?

Label generated here. Make your own. Go on. Do it. Ahh… some “Christians” give the rest of us a bad…

Miss Zima Peters is in hospital dying of cancer. She urgently needs help getting her money out of the country…