Behavioural economics fascinate me. Here’s a story about a guy named Cass Sunstein who’s a friend (and loosely speaking, an adviser) of Obama’s, from the University of Chicago, who wrote a book called Nudge, it sounds Gladwellesque. It might be my next holiday read… 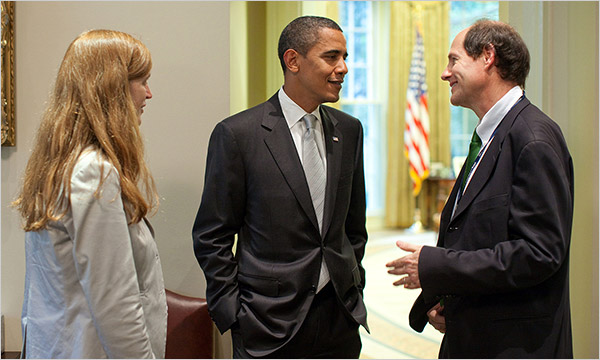 Here’s a bit of a summary from the compelling NY Times profile.

In “Nudge,” a popular book that he wrote with the influential behavioral economist Richard Thaler, Sunstein elaborated a philosophy called “libertarian paternalism.” Conservative economists have long stressed that because people are rational, the best way for government to serve the public is to guarantee a fair market and to otherwise get out of the way. But in the real world, Sunstein and Thaler argue, people are subject to all sorts of biases and quirks. They also argue that this human quality, which some would call irrationality, can be predicted and — this is the controversial part — that if the social environment can be changed, people might be nudged into more rational behavior.

Libertarian paternalists would have school cafeterias put the fruit before the fried chicken, because students are more likely to grab the first food they see. They support a change in Illinois law that asks drivers renewing their licenses to choose whether they want to be organ donors. The simple act of having to choose meant that more people signed up. Ideas like these, taking human idiosyncrasies into account, might revive an old technocratic hope: that society could be understood so perfectly that it might be improved. The elaboration of behavioral economics, which seeks to uncover the ways in which people are predictably irrational, “is the most exciting intellectual development of my lifetime,” Sunstein told me.

Sunstein now works with OIRA – which, being an acronym, is a government department. A department that looks at policy ideas and ways them up economically using a cost/benefit analysis that controversially assigns dollar values to intangible things… it has previously used these values:

The office’s administrators require that federal agencies express the costs and benefits of their proposed rules (lives saved, swampland preserved) in dollars. Moral principles, filtered through this cost-benefit analysis, find their way into confounding little boxes. A human life, the E.P.A. figured in a 2001 rule about arsenic and drinking water, was worth $6.1 million. (If an environmental regulation would save one life but cost $4 million, it ought to be put into effect; if it cost $8 million to save that life, the regulation would be scuttled.) Each I.Q. point a child lost because of exposure to lead was worth $8,346 over the course of a lifetime. A lost workday was worth $83. Many of these estimates used data from surveys — taken at malls, among other places — that asked passers-by how much more they would need to be paid to take on a job that carried, for instance, a 1-in-10,000 risk of death. Richard Posner, who has the most magnificent and chilly mind in this realm, used similar projections to price the benefit of preventing the extinction of the human race at $600 trillion.

Sunstein wants to bring this utilitarian approach together with his “libertarian paternalism” which would be very interesting indeed.