Country music fans might be feeling like they got off lightly in Jacob Aranza’s first installment – “Backwards Masking Unmasked,” but alas, this was short lived. 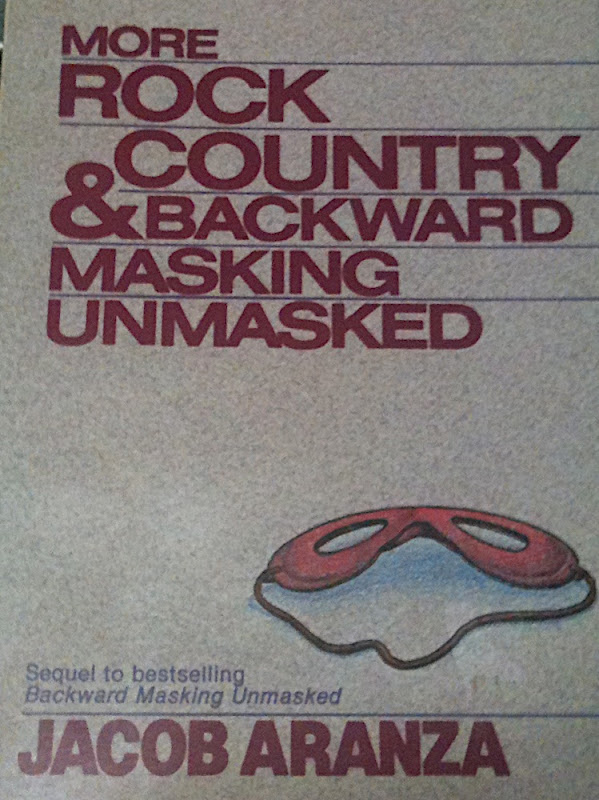 I’ll get into the review proper in coming days. First, this new installment includes the following chapters:

Plenty of blogging fodder. The “Behind the Scenes” chapters are where Aranza tells you what’s wrong with your favourite band. The “Mailbox” is a series of letters he received after his first book, and it’s where we’ll start our review. I’ll try to knock a post on the Q&A out tomorrow…

Your book Backward Masking Unmasked woke me up to the fact that I have been a part of “rock and roll religion” for most of my teen years. I was a member of a rock and roll group and although I didn’t do drugs or drink, I was greatly influenced from the moral standpoint. I now realise that rock groups don’t intentionally worship Satan, but are serving him just by being into rock. I know it’s going to be tough to give it up, but I know that I need to serve the Lord and do whatever is necessary to do so.

Well, you know what else is tough to give up. Rick Astley.

My mother picked up your book Backward Masking Unmasked for my sisters and I. I am familiar with many of the rock groups and songs. I am also very moved with your book and have decided to stop listening to rock music.

J.G writes like a Nigerian Scammer. I wonder if Jacob truncated his request for money delivered by Western Union when preparing letters for the book.

I just finished reading your book Backward Masking Unmasked. I must admit I was shocked at all the groups involved in this and I am sure that there are many more. I have been born again for about one and on-half years, but I was still listening to rock music. Well, not any more! I have about 400 albums that are going in the trash and they will be broken and smashed so that no one will be able to listen to them. My radio is now on AM WEZE and WRO; the only stations in the area that have Christian programs. The thought of listening to rock turns me completely off now!

If only ebay was around when K.B was destroying and dumping his records. The choice wouldn’t have been so straightforward then. Critics of my criticism will no doubt point out the scene in Ephesus where the Christian converts burn their magic scrolls (that were worth a lot of money) – but I can’t help but see destroying 400 albums as a waste. But the biggest waste will be the hours K.B spent listening to Christian radio.

Praise God for your book Backward Masking Unmasked. It helped me get born again! I had gone to church for 12 years and had become very “religious.” I loved rock and roll music. It became my attention at school, my comfort at night, my pride and sex. I started enjoying this music and I wanted to dance. So I did. Oh, it only started when I was in the privacy of my bedroom. A few years later it took me to booze, bars, and the “gay lifestyle.” I centred my life around strip shows and getting attention. I had your book for over six months. I decided to read it one day. Then it dawned on me that Satan had entrapped me just by listening to music.

Now, lets follow the slippery slope. Rock music leads to dancing, leads to drinking, leads to being gay. Wow. If only somebody had told Bowie. So much pain might have been avoided.

It seemed for many years that no one really cared about what happened to me, so I took to rock when I was really young. I read in all of the rock magazines that the rock groups really cared about their fans, and that made me feel good and wanted, like I really mattered. I now see all they cared about was the money, not me. It is great to know that someone like you thinks I matter. Thank you, and God bless you.

Well. I don’t feel like rock musicians have been manipulating me, or just using me for my money. So I thought I would write Jacob Aranza this letter (I am going to email it to him).

I am writing to you about a book you wrote more than 25 years ago, called Backwards Masking Unmasked. You might have forgotten about it. I saw on your website profile that you’ve had five books published, so I’m guessing you still remember it. I have two of them by the way, Backwards Masking Unmasked, and More Backwards Masking Unmasked. But sorry, you don’t get royalties. I bought them second hand. One was for sale in an “abandoned” books section. I’ve always wondered what it feels like to write a book and watch its life cycle. From best seller to the bargain bin. You even had a senator endorse your book. That’s cool.

Anyway. I’m a Christian. I love Jesus. But I also love rock music. I like some of the bands you wrote about. But a lot of them have lasted less time than your book. Longevity is so fickle. Half those bands were probably in the “abandoned bin” years before your book. I’m not sure what some of the bands you wrote about sounded like – but if they were anything like Nickelback – I can understand where you were coming from.

What do you think of U2? They’re a rock band. Right? I don’t like U2. I think they write boring music, I don’t know if they’re boring people, but Bono claims to be a Christian and he always talks about charity work and stuff, so he’s probably boring. And he wears coloured glasses. That’s kind of creepy. Bands that court the Christian market are the worst, don’t you think? Like U2, and Creed. And Destiny’s Child. Though Beyonce seems to be a bit less “moral” these days. Come to think of it, so does Britney. I don’t want to put my faith in a Christian band only for them to end up going a bit bonkers and attacking cars with umbrellas. I think I prefer dealing with the secular bands, at least then you know where they’re coming from.

I notice you put your address on your book. Wasn’t that asking for hate mail? Did any rock musicians send you half chewed bats?

So, Alice Cooper became a Christian. Did you apologise for saying he was hellbound? Do you think your book helped him discover the love of Jesus?

I enjoyed your book, but probably not for the reasons you think. Bits of it read like a conspiracy theory movie, or that one with Nicholas Cage where he links disparate facts and circumstantial evidence to make not very compelling logical jumps in order to reach a conclusion. I think it was called National Treasure. Your books are National Treasure-esque Jacob. Thanks for writing.

I notice that in your sequel you include some “fan mail” is there any chance you could include my letter in your next sequel? Perhaps with a link to my blog? I’ll send you the address if that’s possible.

Of all the bands Aranza doesn’t like – the Eagles are on top of the pile. They get a whole…

2 thoughts on “What the devil’s wrong with country music?”