Where would you be at financially if you’d stocked up on Apple shares rather than Apple products over the last 15 years? Rich. That’s where.

This is quite an amazing little comparitive study that almost has me convinced to fork out as much for my iPad 2 in Apple stock as it costs to buy it (this, people, is why I got my summer job). 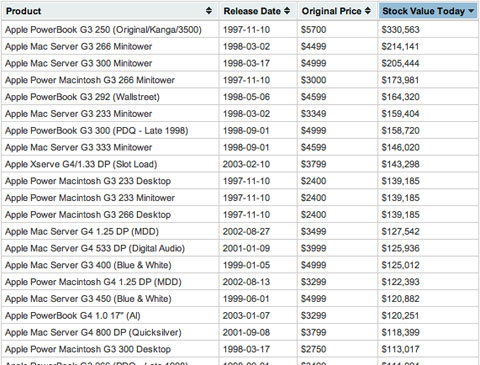 “Now imagine that instead of buying the Apple PowerBook in 1997, you decided to spend $5,700 on Apple stock. You would have done a little better. Indeed, today your Apple stock would be worth $330,563. Probably makes you think twice buying about that laptop.

Kyle Conroy, a computer science student at University of California, Berkeley, has hundreds of other examples on his personal Web site that show what would have happened if you had decided to purchase Apple stock, which is at around $350 a share Thursday, instead of buying the company’s products when they were announced.”

Via the NY Times.